From Oreos to Justice 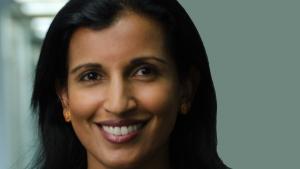 “I never thought that marketing could free the oppressed,” said Sheeba Philip, Vice President of Global Marketing and Public Relations at International Justice Mission (IJM) and an InterVarsity alumna.

What she knew from experience was that good marketing could help the world fall in love all over again with Oreos and Chips Ahoy! brand cookies. For ten years Sheeba worked in the corporate world, serving as the Senior Director of the Global Treats Brand Platform for Mondelēz International and Kraft Foods, and as Global Marketing Director for Oreo, a $2 billion brand known in over 100 countries.

She had essentially reached the pinnacle of her career and was thriving in her work. Why would she choose to leave a great boss, exciting growth opportunities in the corporate world, and the chance to market the darling of the cookie world?

“Many times God gives us very over-the-top different opportunities,” Sheeba said. “But he has to prime us for it.” In other words, he has to prepare us and open us to the possibilities so that, when they come, we’re willing to take them.

For Sheeba, the priming happened about six years ago when she went on a faith and work retreat to seek God about where he might want her to go next in her life. While on the retreat, she bumped into a woman who wanted to pray with her. “She shared a vision of me working with young women, freeing them from sex trafficking and oppression,” Sheeba explained. “I thought that was crazy. I couldn’t imagine what she was even talking about!”

Over the next several years, however, God began to open her heart to using her skills more directly for his work. On a ministry trip to India—where her parents are from and where her grandfathers had done pioneering missionary work—she saw a glimpse of the reality of trafficking and poverty. “My goal was to stay in my role at Mondelēz but use my skills to help organizations,” she said.

By January of 2013, Sheeba sensed that it was time to make a change, so she spent two weeks in focused prayer about her work. “I was really open to whatever God had,” she recalled, “but in my mind God’s next natural step would be in the corporate world.”

She was wrong. A friend sent her what seemed like a random email about the VP job at IJM. “I had not thought at all about working in the non-profit world,” Sheeba said. “But when I read the job posting, my heart jumped a bit. It was totally radical and not what I would have guessed, but I felt like there was something there.”

Six months later, she found herself in Virginia, ready to start her work of helping bring freedom to people who’d been trafficked and oppressed. “God’s word will not return void,” she said, looking back at the retreat. “The woman’s prayer and my friend’s email—those kinds of things really helped me know that this was God’s door. Without that I would have been too scared to make the move.”

“Working with IJM has been a tremendous experience in so many ways,” said Sheeba. “You don’t get many opportunities to take corporate skills and apply them to what God is doing in the world.”

And yet from the beginning of her career, faith has always been an important part of her leadership. “I was the co-leader of the InterVarsity fellowship while I was at Harvard Business School,” she said, “and it was a profound, pivotal point in my walk with the Lord.”

Her time in InterVarsity shaped her constant desire to integrate faith in her work and life. “We talked a lot about that integration and how it all becomes seamless,” she said. “InterVarsity at Harvard really cultivated that for me, and then when I came out of grad school the idea became more fleshed out.”

Harvard Business School was pivotal in other ways spiritually too. Though Sheeba has been a Christian all her life, until grad school she’d never had an opportunity to publicly pronounce her faith in Christ. Harvard Business School wasn’t the easiest place to start. “Jesus and God are not the topic of conversation there,” she said. “It’s power and success. Servant-leadership was not a big part of the culture at the time. I hesitated to lead because it was going to force me to stand among peers and tell them I’m a follower of Jesus. I had to live the talk. That transformed my walk, and forced me to articulate what I really believed in.”

She also learned the importance of community. “I hadn’t met like-minded Christians who were passionate about using gifts in their career, and who loved Jesus,” she said. “You have to be in community to grow in your relationship with Christ. I didn’t learn that until I was in InterVarsity.”

Leadership in both the corporate world and the non-profit world can be stressful and, at times, all-consuming. Several practices have sustained and strengthened Sheeba in her roles.

Prayer is one. “There has not been a season when I have asked the Lord for wisdom and clarity and he has not given it to me,” she said. “If there’s a decision you need to make, spend the time in dedicated prayer. God honors that and those who seek his wisdom.”

Mentors and friends have also been integral. “I’ve always surrounded myself with really strong believers—Christian professionals who can give me spiritual and professional guidance,” she said. “I also have a mentor—a senior leader at MasterCard who is a strong believer. I’d encourage others to find people like that.”

Reading God’s Word and really understanding his principles remains crucial to her as well. John 15 has been a particular source of help in her professional career. “When God takes you through new experiences, it’s him pruning what’s meant to be pruned and allowing the fruit that is growing to expand or grow even more,” she said. “That’s what I’ve seen God do in every trial. Being completely aware that apart from him you can do nothing—that absolute dependence—reiterates that for me. He has to give me the wisdom and guidance.”

Absolute dependence has become even more important in her role at IJM. “It’s very easy to be completely overwhelmed,” she explained, “because when you see what suffering is, you wonder how you can make a difference. But it’s God’s fight.” That reminder has been very humbling for her. “He’s called IJM to do this work, but it’s ultimately in his hands. He has to solve it. When I put it in that context, I can take a deep breath and make it.”

She’s also had to trust God in the adjustment to non-profit work. “I went from marketing cookies to helping people understand the world of justice,” she said. “To transfer my skill set there was a big leap of faith. I had to gain an understanding of the issues of poverty and violence.” The resources at her disposal are different too. “In a non-profit, you really are trusting that God can multiply the fishes and the bread and do the impossible,” she explained. “I have to live that concept out every day at IJM.”

But, as she looks back, she’s grateful and amazed at the opportunities God’s given her and the ways he’s led her. “What God can do with just our faithfulness and our talents is amazing,” she said. “He has done so much more than all I can possibly imagine.”

No doubt, as she continues to draw her strength from God, the vine who gives life, there will be much more fruit to come—both in her life and in the lives of men and women whom her work will help set free.