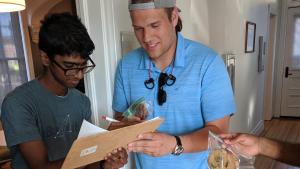 When asked about outreach, students couldn’t agree on the best part.

“Outreach is great because it’s so easy” and “I like it for the calm feeling you get when you invite strangers to Bible study” were common answers.

Others mentioned how much they love being ignored or never hearing from someone again after a meaningful conversation they had while doing outreach.

If what you just read sounds made up, that’s because it is.

For a lot of Christians, efforts to spread awareness of our ministry, and of the gospel, and welcome others into our lives (aka outreach), can be challenging, to say the least. It’s not that we lack confidence in a good and faithful God. Often, the difficulty is rooted in the anxiety we feel when we share our core values with others, only to face rejection. Because outreach can be an awkward experience, some avoid it completely. But it doesn’t have to be this way.

InterVarsity students at Russell Sage College and Rensselaer Polytechnic Institute in Troy, New York, made this discovery. Two years ago, they decided to try a cookie drive as a way to engage their campus. Their plan was to deliver cookies weekly through a sign up sheet in which students could receive cookies up to a few times a semester–for free.

“I didn’t believe there were good people in the world,” a student said when InterVarsity campus staff, Niki, explained the no-cost, no-catch, baked goods service.

“Me neither,” Niki replied. “But I believe in a God who helps me do better.”

The way they’re pulling it off is simple: partnership, commitment, and the power of cookies.

Local churches partnered with the InterVarsity chapters at Rensselaer and Russell Sage to prepare and bake the cookies each week. Then, as word got out about the drive, neighbors and other church members got involved. They reached out to Niki and asked how they could be praying for students. One man in Troy offered to bake cookies every Monday and has now been doing so for the past year.

At both schools, the chapters have received an encouraging amount of support from Resident Assistants on campus. Over at Rensselaer, RAs were so moved by the drive, they started advertising it to their dorms. And at Russell Sage, though the cookie drive had a seemingly rocky start, an RA remains one of their biggest fans. She confronted the group one day as they were spreading the news about their drive near a freshman dorm. At first, the group worried they were in trouble. But they were instead met with enthusiasm. The RA told them that because Russell Sage is such a small school, it’s hard to get students excited about anything. She asked them to keep it up and is grateful that their outreach is bringing some liveliness to that part of campus.

The students running the cookie drive collect names and addresses, sometimes help bake cookies, and deliver them. If they deliver cookies to a dorm and the recipient isn’t there, they’ll leave the cookies and ask any roommates if they’d like the free treats next time. The opportunities to expand not only their reach, but also their workload, never end.

Their committed efforts mean they’ve become a well-known group on campus. Even professors and graduate students have asked the group to deliver cookies to them.

It’s a lot of responsibility, but they know it’s worth it. They rotate groups throughout the school year and even have students handling it during the summer. And yes, they do this every week without missing a beat—often, more than once a week.

Everyone loves cookies. In fact, students came out in droves to bake alongside InterVarsity when they organized a cookie delivery during finals week. This gathering gave students of different beliefs and backgrounds a shared space to not only work together on something they can all agree on—cookies and the happiness they bring—but to also begin conversations about faith. They invited students to Large Group, and some came. But those who didn’t left knowing that InterVarsity exists, and it’s a place on campus where they’re always welcome.

Recently, the chapter tried something a little different and put on a cupcake decorating event. A student approached them and said, “I knew you were the Christian group.” He continued to explain how their presence was a comfort to him. If he ever felt stressed or faced a time of crisis, he knew there was a group of people on campus who cared, and he wouldn’t hesitate to reach out.

So yes, fresh, warm cookies (or the occasional cupcake) are a blessing. Few would deny that. But it’s not just the cookies that make this such a successful outreach. People are moved by generosity. These students and those partnered with the chapter sacrifice time, resources, and labor to provide this service. And while reactions range from excitement to curiosity to skepticism, all can agree that the free cookie drive isn’t ordinary. That’s why it’s so effective.

Niki says that since starting this outreach, her students are less timid to “out” themselves as Christians. They know that in certain contexts that label can carry some uncomfortable weight. Not every Christian regularly reveals the nature of Christ. But students and faculty on both campuses are witnessing that nature now from these InterVarsity chapters. Jesus came to serve and to be a light in the lives of those around him. InterVarsity students at Rensselaer and Russell Sage have become that light to others. As a result, they’ve dispelled many of the stigmas surrounding religious organizations on campus.

While it may initially seem like these two groups in New York are just running a mobile bakery, they’re really accomplishing so much more. In the process, they’re meeting people they otherwise wouldn’t, having meaningful conversations, and becoming a constant, friendly presence in the lives of their peers. Although this method of outreach still isn’t easy (because outreach will probably never be easy), it’s happening . . . and it’s changing the culture of the campus as it does.

As InterVarsity seeks to see every corner of every campus reached with the real hope of Jesus by 2030, we know we can't do it alone. That's why we're engaging partners–alumni, other organizations, and churches, like the ones who bake cookies for Russell Sage College and Rensselaer Polytechnic Institute, to join us. Find out more about our 2030 Calling by clicking the button below.

Read about the 2030 Calling

“Why did you just walk in, an hour late to this lecture?” the instructor asked the two students who paused at the door of the Friday night EMT training at Amherst College.