Prayers and Planting at Pembroke 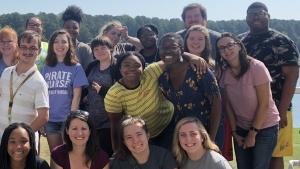 She prayer walked both campuses with her supervisor.

Meg’s church encouraged her to plant at FSU, but the doors weren’t opening there. “At Pembroke, doors were flinging open,” she said. “I was meeting just the right person, who would introduce me to another person, and I was meeting students easily. It was abundantly clear that the Lord was making a way for me to start something.”

The chapter was launched and officially recognized in the spring of 2017. A small Bible study was planted, and four students went to chapter camp at the end of the semester. Two of them were trained in Bible study leadership, and led Bible studies in the fall. The next year, more students received leadership training, and there were four Bible studies launched for the fall 2018 semester. This past fall, there were three small groups and the strongest group of leaders yet.

Meg did not see herself as a planter. During her early years on staff at the University of Illinois, she was part of a team and was very team oriented. Yet, lacking team support didn’t seem to matter at Pembroke.

“I stopped and asked myself, Why does it seem like everything is working now? These are the same tricks I’ve always used as a staff worker. I realized that the Holy Spirit was creating momentum. I’m just going to ride this wave.”

As Meg investigated further, she discovered that people had been praying for a campus ministry at Pembroke for over a decade. She herself had spent her first two summers in Fayetteville, when planting was slow work, praying an hour each day.  “I’m walking on a campus that’s been saturated in prayer and I could tell,” she said.

Meg had seen the impact of prayer before as a student at Southern Illinois University Edwardsville (SIUE). As a freshman she joined a small chapter of about a dozen students. “We spent a ton of time in prayer, and our chapter just exploded,” she recalled. By the end of her sophomore year the chapter grew to 50 students.

“I came into college as a good church kid who did church things, and God had always been a part of my life,” she said. “It was at Chapter Focus Week [at the end of freshman year] that I realized God had become the center of my life. Chapter Focus Week was a big spiritual milestone for me.”

Meg graduated from SIUE with a bachelor’s degree in Fine Arts with a concentration in metalsmithing. She said her Fine Arts training taught her resourcefulness. This, along with her strong prayer life, was critical when her husband decided to join the US Army.

The summer of 2014, after she and her husband Ian married, they led an InterVarsity Global Program to Malawi. He was stirred by the deep poverty and injustice that he saw and felt like he needed to respond somehow. He asked Meg to pray with him about whether or not he should join the Army. She was upset and deeply opposed to the idea of him joining the Army—but not to praying about it.

“This was not at all where I expected life to take me,” she said. “I got to a place where I had to tell God, ‘If you want us to do this, I need you to change my heart, because I don't want to give a begrudging yes.’” And God did change her heart.

Meg and Ian were separated for a number of months while Ian went through training, until they settled in Fayetteville once they knew that was where he would be stationed.

Meg likes the culture of UNCP, partly because it’s known for its diversity. Of its 6,500 students, 1/3 are White, 1/3 are Black, 15 percent are Native, four percent are Latino, and there are smaller numbers of other ethnicities.

Students at UNCP are generally open to ministry; a recent outreach involving prayer and free cookies was particularly successful. Two students came to faith in 2018, and six have already come to faith so far this academic year. “We’re making more opportunities to make invitations, and the students are responding,” she said.

Meg sees strong evidence for how the Lord has been leading the ministry at Pembroke. She has grown in valuing time in God’s presence and praying, and she sees students also valuing that spiritual discipline.

“I don’t know what’s ahead,” she said. “I’ve been along for the ride and it’s really great.”

Give to help plant chapters on more campuses