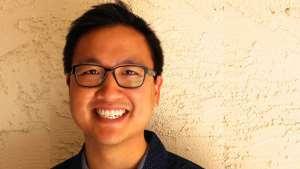 When the San Diego State University InterVarsity staff met for prayer before the start of classes this semester, two staff members each sensed God impress on them that “faking it” was going to be an issue to deal with in campus ministry in the weeks ahead.

Alan Sun, the South San Diego Area Director, was not too surprised then when New Student Outreach began and he met a student who confessed that he felt like he was faking it in his spiritual life. The student’s father was a pastor, but he explained that he had just been going through the motions and didn’t really have a faith of his own anymore.

The next time they got together, Alan and the student had a long talk about the barriers that were keeping him from an authentic faith. “He wanted to drop that mask and be himself,” Alan said. Eventually they prayed together and the student recommitted himself to following Christ.

During the six years he was a campus minister at San Diego Mesa College, Alan met few students who were faking it. “Everything was on the table; that’s the uniqueness of a community college,” he said. “At San Diego State though, there’s always an image that you have to keep up, the challenge of needing to be something that you’re not.”

Alan’s ministry has been shaped by his time at Mesa, and he and his staff now coordinate a unique ministry that links San Diego State with two other local community colleges: Southwestern College and Imperial Valley College. Student leaders of the San Diego State InterVarsity chapter spend some time each semester helping with outreach at the other two campuses, and students from the community colleges attend the weekly Wednesday night large group meetings at San Diego State.

There are obvious differences between life on commuter campuses and residential campuses but they are maybe not as significant as they first seem. Alan recalls driving to a retreat once with men from the top San Diego State fraternity houses. A community college student who was a professional gamer on the side was also in the car. “As they talked about their hobbies and their lives, they realized they were not that different,” he said.

Serving at the community colleges has been encouraging to student leaders from San Diego State, where ministry faces its own unique challenges. “Rejection is the norm when passing out flyers on the San Diego State campus, but the response rate is high at community colleges,” he said. “It’s been good for student leaders to get ministry experience outside of their context.”

Alan still has the flyer he received as a new freshman at the University of California San Diego (UCSD), inviting him to an InterVarsity barbecue. The free food was appealing and he was looking for a Christian community to join. For the rest of that year he vacillated between InterVarsity and an Asian American fellowship. Though he felt more at home when he was with students of the same ethnicity, InterVarsity’s focus on pursuing God and reaching out to others gripped him.

During his sophomore year, James Choung, then the UCSD Team Leader, encouraged him to commit to InterVarsity. “I remember conversations with James about how my ethnicity is valued in the kingdom of God,” he said. Alan led a small group Bible study in InterVarsity the next year and became chapter president his senior year.

As Alan prepared to graduate, James invited him to join InterVarsity staff. Once again Alan was torn. His mother was encouraging him to use his molecular biology degree to do cancer research and to explore science as a profession, in part because his father had died from cancer when Alan was in high school. He filled out the staff application but finally decided against campus ministry.

He worked for a year-and-a-half in the biotech field but he also used his InterVarsity experience to host Bible studies. After he led a co-worker to faith in Christ, he thought to himself, “I should be doing this as a job.” He re-applied to join InterVarsity staff.

San Diego Mesa College was his first staff placement; he partnered with Serene Neddenriep there and they became part of one of InterVarsity’s first chapter-planting cohorts. Together they learned some of the best ways to connect with community college students (and administrators). 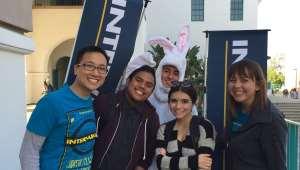 “That catapulted us to a new normal for outreach,” Alan said. Without a table on the quad or space on a bulletin board with other student groups, InterVarsity came up with a creative alternative to spread the word about chapter activities: banner backpacks. “It ignited an ingenuity and a missionality that is still used to reach students,” he said.

Today, Alan and his wife, Anna (who is also on staff), direct a 12-member team that partners with local churches to serve students and faculty at San Diego State, Southwestern, and Imperial Valley.  The strongest partnership is with Holy Spirit Anglican Church, which lists InterVarsity on its webpage as a ministry partner in serving the San Diego State community. “They are a couple of blocks from campus and have someone present to volunteer at almost every one of our gatherings,” Alan said.

The church partnerships, the current staff team, and the student base at San Diego State have the potential for reaching more of the 100,000 students that Alan has identified on all of the surrounding community college campuses. "When we think about the harvest being plentiful, I think about my area,” he said. And he’s not faking it.