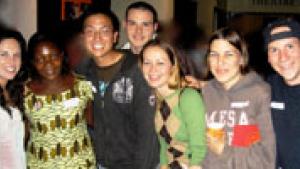 Mesa Community College in San Diego is one of the largest two-year campuses in California. Like most commuter colleges, it’s a challenging environment for ministry. Students don’t live on campus; their social activities are mainly off campus. Many students carry a heavy load of work and family responsibilities.

Despite these obstacles InterVarsity staff members Alan Sun and Serene Haughey launched a chapter at Mesa over the past year and even the college president couldn’t help but notice.

“Our goals are to be public, engaging, and inviting,” Alan says. “As we are outside every day for Bible study, we are very public and very open.” One day their Bible study was interrupted by loud, ill-mannered evangelists who were preaching a gospel of condemnation. As the campus tensed and questions swirled about, Alan quickly created some signs that emphasized themes like “Forgiveness,” and “God is Love” in an attempt to keep positive dialogue flowing. Mesa president Rita Cepeda observed the exchange and complimented Alan on his initiative.

Alan had more contacts with Dr. Cepeda as InterVarsity worked through the process to become an officially recognized student organization. She defended the chapter against hostile faculty. When the chapter teamed with World Vision to bring the Impact One AIDS awareness campaign to campus, she accepted Alan’s invitation to walk through the Impact One tent to learn about lives impacted by AIDS. She was moved by what she saw.

As Alan got to know Dr. Cepeda through regular contacts, he and Serene decided to invite her to an event for InterVarsity’s San Diego supporters and friends called Everyday Worldchangers, held on June 5, 2007. InterVarsity Press author James Emery White was the keynote speaker, discussing the themes of his book Serious Times. Dr. Cepeda was also invited to say a few words about InterVarsity. She gave a strong endorsement for InterVarsity’s work at Mesa Community College.

“When I came to Mesa two years ago, it excelled in its academic mission, but the school lacked heart. Faculty and staff had no feeling for what took place beyond the physical footprint of the campus, in the neighborhoods, in students’ families, among the poor of our community. InterVarsity impacted our college and moved it to acquire a heart. InterVarsity’s Impact One tent touched the campus and it touched me. We are not the same.”

Alan and Serene were greatly encouraged by Dr. Cepeda’s remarks. “In two minutes her testimony really opened our eyes as far as how big our connections need to be, and how closely knit we need to be working with campuses to renew them,” Serene says.

Both Alan and Serene got connected with InterVarsity as students at the University of California at San Diego. “The uniqueness of the community college sometimes catches us off guard,” Alan says.

This summer, after some seasoning on the Mesa campus, Alan and Serene got the chance to be trained as new chapter planters. “The chapter planting cohort gave us a lot of clear directions and processes of planting a chapter,” Serene says. “We want to create something sustainable at Mesa, and not just something that reflects our personalities.”

Alan and Serene know, for instance, that even though they both have a passion for evangelism, they also have to get Christian students who come to Mesa, involved with InterVarsity. They want to develop a healthy community of faith that looks out for each of its members as a family does. “Christians don’t always know why they’re at Mesa either,” Serene says. “We’re going to pitch our vision constantly and call people to follow God.”

You can make a direct financial donation to support InterVarsity’s new chapter at Mesa Community College by following this link.