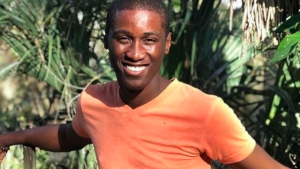 Israel always felt like God’s middle child. Being the fifth eldest in a family of nine children makes him an actual middle child, but with how he felt towards God, the title cut deeper. He struggled to feel seen. “I wondered if I really mattered to God,” Israel said.

But then Israel met Jon, an InterVarsity small group leader at his school, Hillsborough Community College. While Israel grew up in a Christian home, he felt connected to God only through his parents’ relationship. So he jumped on the chance to go to Jon’s bible study to figure out how to know God himself.

When he was invited to attend Focus Week, a regional camp at the end of the school year, a few months later however, Israel was more hesitant to go and had no idea what to expect. On top of that, he was intimidated since he had yet to meet everyone in his InterVarsity chapter, much less students from other Florida schools. “Social anxiety is real” he said. But some of the leaders of his InterVarsity chapter told Israel how transformative their Focus Week experiences were, so he decided to give it a chance.

“I went into Focus Week feeling heavy and burdened. I wanted God to fix everything, but I didn’t really believe he could do that in just one week,” he said.

The first few days of Focus Week eased some of Israel’s anxieties. He noticed the intentionality of everyone there and valued the diverse group of people around him. It didn't take long for him to feel a part of the community and to feel at home. Israel loved the multilingual worship, conquered his fears on the screamer (a giant swing on the campground), and enjoyed playing volleyball with other students.

But Israel still hadn't started experiencing the spiritual breakthrough he was wanting. Did he actually matter to God? And if so, could he be honest about where his heart was and what he struggled with?

Finally, during a retreat of silence, Israel addressed all the doubt that weighed on him throughout the semester. He went to the chapel, and instead of saying his prayers out loud, wrote them down. Holding nothing back, he confronted the tension he had long felt between him and God. “I thought, It’s just you and me, God, and I told him my fears, what I wanted in life, and why I was angry at him,” he said. It was in that space that Israel felt the burden being lifted.

He spent the last thirty minutes of the silent retreat reading Psalm 25. The last verse of the Psalm, “Deliver Israel, O God, from all their troubles,” really hit him. He saw that the nation of Israel was cared for by God and felt in that moment that he—Israel—was also cared for by God. He knew now that his life mattered and he no longer felt like an overlooked child, but one whose troubles were of deep importance to his creator. Israel took refuge in that truth.

After over a month since Focus Week, Israel remains trustful in Jesus. He’s grateful for the community at Hillsborough Community College that he’s grown close to and wants to stay connected to them through their summer Bible studies. He knows he has people who care for him, and he can now be himself with them and with God. “I never really had community outside of my family,” he said. “It’s good for me to have a group of people to relate to and keep me accountable.”

Israel is excited about his future. He hopes to eventually become a leader with his chapter and even someday do missions. “I know God has good plans for me,” Israel said. “And I’m not afraid to be who he made me to be.

Throughout May and June, InterVarsity students across the country attend end-of-the-year Chapter Camps--times of fun, worship, and deep Bible study away from campus. For being such a brief part of our ministry year, Chapter Camps play a powerful role transforming students' lives, catalyzing new relationships with Jesus, and propelling students for ministry on campus in the coming fall semester. Please pray that Chapter Camp experiences would have lasting impact for students like Israel. And to receive email updates with other ways to pray for InterVarsity students, sign up for the Intercessor by clicking the button below.