Staff Life Is a Journey 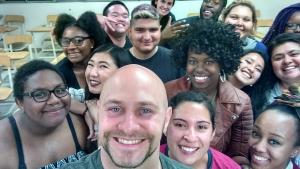 Five colleges in four years meant that once Gent Grush finally settled at San Diego State University (SDSU) as a student it took him an extra year to get his psychology degree. But those two final years at SDSU also solidly grounded him in his faith.

Gent (who is named after his great-grandfather) had a very practical reason for checking out all of the SDSU Christian fellowships when he arrived: he needed to find a roommate. Three of the leaders of InterVarsity happened to be looking for a fourth, and so he found a home in InterVarsity at SDSU. “InterVarsity proved to be the perfect place to grow my faith,” he said.

Gent’s three roommates were Asian American, and it wasn’t long before he began to be confronted with his own ethnicity—a journey that continues today. He is thankful that his roommates understood how to deal with ethnic differences in a helpful way, starting with food and other aspects of their culture that opened up avenues of conversation. “That was a great on-ramp for a White guy from Colorado,” he said.

His last year at SDSU he discovered he was on another on-ramp, this one toward joining InterVarsity staff. He became a Resident Assistant (RA) in one of the largest dorms on campus. That opened a door that had been closed to dorm-based Bible studies, which he then began to invest a lot of time leading. InterVarsity staff members at the time also needed to shore up lagging ministry support, so they concentrated on that, turning over all of the chapter leadership to student leaders such as Gent.

“I always had a desire for ministry, so this seemed like the right first step,” he said. The SDSU chapter was thriving, having doubled in size from 40 to about 80 between the time he first began participating and the time he graduated. Gent joined InterVarsity staff upon graduation and continued the work that he enjoyed: discipleship training and leadership development.

However, someone who really loves ministry can easily get burnt out. And after three years that’s what happened to Gent. “I thought my staff career might be over,” he said. “I needed a vacation.” But what he got was something even better, even though it didn’t look that way at first.

The SDSU staff team wanted to send their student leaders to the Los Angeles Urban Program (LAUP) for the summer. And because the other team members had families, Gent was the obvious choice to lead them. “In my opinion the last thing I needed was an Urban Program,” he said. “But God did a miracle.”

Gent’s ethnic journey, which had begun five years earlier with his three Asian American roommates, took another giant step forward during his first LAUP summer. As he participated along with his students, the urban experiences challenged many of his social assumptions, and reading Bible texts that were new to him challenged his theological assumptions. When his group traveled to Tijuana and spent a night in a homeless shelter, for example, he understood better the fear experienced by many in the immigrant community.

LAUP required Gent to be closer to God than he had been all year long. It exposed him to God’s concern for justice and God’s care for the vulnerable and the exploited in a way that refreshed his soul. He knew that he would not have experienced the same renewal had he taken an ordinary vacation, as he had hoped to do that summer.

Gent returned to SDSU refreshed but soon found himself being drawn back to Los Angeles. The staff team at SDSU was changing, the woman who would soon become his wife lived in LA, and there was a staff vacancy at the InterVarsity chapter at California State University, Los Angeles.

He arrived at Cal State LA in the fall of 2013, just as the California State University System implemented a system-wide policy requiring recognized student groups to accept any student as a potential leader, which conflicted with InterVarsity’s requirement that all chapter leaders affirm InterVarsity’s Doctrinal Basis. Implementation of the policy varied widely from one campus to another in the 23-school system. Gent found a professor who attended the same church he did, who would reserve a room for InterVarsity. The chapter was able to keep meeting with few problems.

The student population at Cal State LA provided another cross-cultural ministry opportunity for Gent. As he mentored the Black and Latino women who made up the leadership team, he realized their experiences and discipleship needs were far different from students he had worked with elsewhere. Once again he was confronted with the contrast between the assumptions he was used to and the ways other Christians responded to the gospel message.

Last year Gent made another transition. He became director of LAUP. He was ready for a change but the change became a challenge. He discovered that although LAUP works well for students who, like Gent, come to college with little exposure to ethnic and cultural differences, it’s not the same experience for those whose lives have included cultural displacement, poverty, and injustice, like many of the students at Cal State LA.

Over its 36-year history LAUP, has been transformative for many students and staff. But Gent believes LAUP must change if it’s to be effective for every student. “LAUP’s responsibility is to disciple all students properly,” he said.

Tom Allen, InterVarsity’s regional director for Southern California, marvels at how Gent faces ministry challenges with courage, humility, and conviction. “I praise God for the way Gent’s leadership is forming student disciples who love God deeply, care for their neighbor compassionately, and engage our complex world thoughtfully,” he said. “Rather than despairing over the challenges of LAUP, he sought the Lord with a deepened humility and greater confidence in a God who can do immeasurably more than we ask or imagine. I am eager to see what Gent re-imagines for LAUP and how our big God multiplies that vision to something more than Gent even imagined.”

Gent doesn’t know yet how LAUP will change. But using what InterVarsity has taught him about how God values justice, he believes it will become better. He is trusting in God’s faithfulness to help him meet this new challenge.