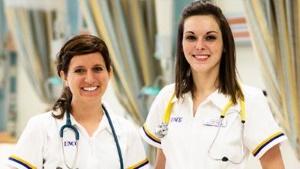 National Nurses Week is May 6-12, and this year’s theme—“The Balance of Mind, Body, and Spirit”—recognizes the spiritual dimension of nursing care. In fact, it suggests that without spiritual care, nursing is unbalanced.

NCF is offering a special Bible study on the Nurses Week theme, and other resources. This year’s theme plus a professional collaboration involving NCF director and JCN editor in chief Kathy Schoonover-Shoffner over the past five years has provided an opportunity to expose NCF to a much broader audience.

The results of the project Kathy has been collaborating on, were published in the February 2017 issue of the American Journal of Nursing (AJN). The project focused on a topic that greatly impacts the spiritual dimension of nursing, moral distress and ways to foster moral resilience. The executive summary for “Transforming Moral Distress into Moral Resilience in Nursing” was published in the April-June 2017 issue of NCF’s Journal of Christian Nursing.

In her own editorial column in that same issue, Kathy reported that the spiritual aspects of moral distress are inescapable: “Spiritual, as in that search for what is right action, is how we figure out what is right, what helps us do right, and how we deal with the distress of not doing right. As Christian nurses we have a Source to go to for wisdom and moral courage.”

Former NCF director Mary Thompson assessed the significance of this project, which had been initiated by NCF. “The articles, which probably will be part of reading lists for nursing ethics classes in universities, can be an avenue for discussion that can lead to considering sources of ethical behavior and how nurses can deal with dilemmas they face,” she said. “The visibility of JCN and NCF through the articles can help to guide people to God’s Word and help them see how Jesus can make a difference in what we face.”

This AJN project was described as a “momentous partnership” for NCF and JCN. It will help insure that not only during National Nurses Week but also for many weeks and months to come, there is a ready resource that helps nursing students and nurses understand ways to develop more resilience to support the balance of mind, body, and spirit.

For the third year in a row, the Journal of Christian Nursing won recognition for both design and editorial quality in the American Society of Healthcare Publication Editors annual awards competition.