Willing to be Transparent 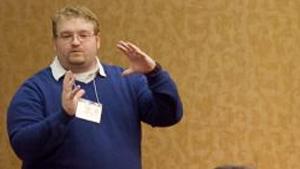 Jaded by the Church, was the topic of a seminar at Sonburst, the annual InterVarsity Florida fall conference, held in Orlando in October. Area Director Steve Tamayo co-led the session, which was aimed at addressing unresolved issues that some people have with organized religion.

Steve calls spontaneous question-and-answer sessions with students such as this Confessional Apologetics. He desires to honestly address issues that keep young people from the Christian faith.

“I can’t speak for whole church, but I can tell you why someone like me does those sorts of things that might make people question our Christian commitment,” he said. “I talked about hypocrisy in my own life and how I don’t think that people notice when I say one thing and do another thing. I talked about my desire for comfort and how I was at times moved to put my desire for comfort above other people’s desire to hear about Jesus or experience the love of Jesus.”

Steve has been on staff with InterVarsity for almost eight years, after first connecting with InterVarsity as a student at Duke University. He had planned on joining another campus ministry recommended by his youth pastor when he arrived at Duke, but he got sidetracked by an InterVarsity Bible study. “They studied Scripture more deeply than I had ever seen anyone study Scripture,” he said. “So I stayed.”

Steve became a student leader at Duke at about the same time more and more Black and Asian students students joined the chapter. “I started to see people who weren’t Christians coming and connecting with InterVarsity because they were intrigued by our diversity,” he said. “I thought it was really exciting, that God would create a multiethnic community and use that as a witness to the gospel. I wanted to be a part of that.”

His own Latino heritage is not immediately apparent, with his blond hair and blue eyes, and lack of Spanish language skills. Steve is thankful for Joe Ho, his Campus Staff Member, who worked with Steve to help him better understand his own ethnicity and also how it could be used in campus ministry. “We Latinos can serve as bridge builders between folks who are white and folks who are black, because we’re kind of outside that historic racial tension,” Steve said.

Steve got his Psychology degree at Duke in just three years, then he went to Oxford University in England for a graduate degree, all the while staying active in InterVarsity. He filled out his InterVarsity staff application while he was at Oxford.

The Process of Evangelism

As a staff worker Steve has discovered that he enjoys helping students discover the process of evangelism. “Those with a church background think evangelism is just about making an invitation to enter the kingdom,” he said. “And when they hear that there’s more to it, that it’s a process and not just a moment, it’s very relieving.”

An important part of the evangelism process is establishing trust. “I’ve seen students who would never have responded to a contact evangelism altar call, but over the course of several months they learned to trust us,” he said. “They moved in their faith from one step to another, becoming a seeker, and then into the kingdom. That’s been really fun – to see that God does that.”

Steve’s former staff worker Joe Ho, now a colleague, says that one of the things he appreciates most about Steve is his hospitality. “It’s this core quality in Steve that has allowed his ministry to touch a dizzying diversity of people — spanning every conceivable spectrum of spiritual interest, culture, class, and gender,” Joe said.

At the session on Jaded by the Church, a lot of the students who were comfortable in their local congregations learned why some of their friends have a problem with the institutional church. Steve also talked with two students who had bad experiences with the church. One was the son of a pastor who had lost his job, the other a woman who wished her church could be more like InterVarsity. “There was a lot of healing that took place,” he said.

A place for healing, learning to trust, transparent leadership, supporting the local church, InterVarsity chapters find many ways to share the gospel message. Steve Tamayo likes to see the power of the gospel message transforming lives on campus.