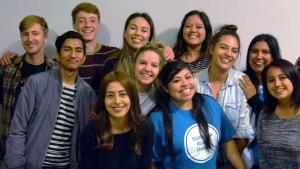 World Student Day celebrates God’s work on college campuses around the world through the International Fellowship of Evangelical Students (IFES). This year, on Friday, October 19, 2018, students in up to 160 countries where there are IFES affiliates took part in World Student Day.

How do students who are separated by geographic and language barriers celebrate together? They pray for each other; prayer knows no boundaries. Students love to use technology; Skype calls on the Internet are common. And sometimes students even cross borders and meet together in person.

Tania Andrade, an InterVarsity Campus Staff Minister at California State University San Marcos, did all three last year, at the invitation of students from Compa, the IFES affiliate in Mexico. “I love that the students were the ones who took the initiative,” she said. “I was really excited.”

Tania already had connections and relationships with Compa staff and students through summer projects and other joint activities, and that made the meeting easier in spite of potential language issues. A group of three InterVarsity staff and five students crossed the border at 5 p.m. on a Friday night and met together with the Compa students and staff at the home of a ministry supporter.

They ate dinner together, worshiped together, and connected with Compa student groups in Veracruz, Mexicali, and Tecate via Skype. During the Skype calls, prayer requests were shared back and forth and then they prayed for each other.

“Every Skype call we had, we could tell that they genuinely cared about each other,” Tania said. “We learned a lot about Compa’s ministry and were inspired by their creativity.”

During the evening the students and staff also broke up into groups and prayed for some of the cities most impacted by recent earthquakes: Mexico City, Oaxaca, Chiapas, and Morelia. During the worship time together Compa students led some of the songs and InterVarsity students led some. “It was also cool for us to sing a song in Swahili,” Tania said. “It was a beautiful moment for us to praise God as a global God!”

Participants in World Student Day learn about how God is moving around the world, in ways that are different from where they are. They also learn about their unity in the faith. “It’s a great experience of seeing the greatness of God and the church coming together,” Tania said.

Find out how you can participate in World Student Day.