Bearing Burdens Together: The Power of Prayer and Flourishing Faculty | InterVarsity
Skip to main content
By Gordon Govier

Bearing Burdens Together: The Power of Prayer and Flourishing Faculty 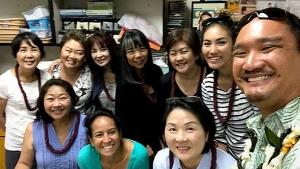 May Kealoha, a nursing professor at Oahu’s Kapiʻolani Community College (KCC), was used to praying about big decisions. But as a member of a faculty committee that was facing a big decision affecting the future of KCC, she did not want to pray alone.

Brennan Takayama had just moved to Oahu to become an InterVarsity Area Director. Prayer was part of his plan as he envisioned planting InterVarsity chapters on more Oahu campuses to reach more students with the gospel.

But neither expected how well their hopes and prayers would come together when they discovered each other at their church in Honolulu and began to talk about campus ministry.

Brennan said he would help Professor Kealoha start a faculty prayer group. But a week later, when he returned from a conference, he found a message from her saying that she had already contacted other Christian faculty and administrative staff whom she knew and planned a meeting. She invited Brennan to come.

“We got together, shared prayer requests, and then we prayed,” Brennan said. “There was not a dry eye in the room. It was so significant. They were praying with other faculty and staff, on campus, in the middle of the day, to Jesus—something that they had never experienced before, and never imagined could happen.”

The KCC prayer group has been meeting almost every Friday for the last year-and-a-half. “We have so many struggles,” Professor Kealoha said. “It’s such a blessing. We call it a little heaven at the end of the week.” Answers to prayer have included financial support for a medical outreach and chemistry research, as well as healings. 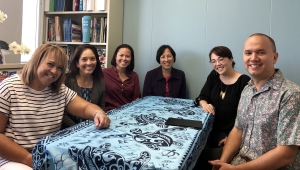 Terry Lock, an elementary education professor at the University of Hawaiʻi at Mānoa, attended last year’s celebration of InterVarsity’s 70-year history in Hawaiʻi because all three of her children had been, or are currently, on InterVarsity staff. When she heard about the KCC faculty prayer group, she knew she wanted to start one on her campus.

“We’ve been meeting regularly every other week to pray since September and it’s been incredible,” Professor Lock said. “God quickly revealed to us that he’s been present on this campus all along and that we were now joining him in his efforts. Now we don’t have to bear the burdens of our work by ourselves and we pray for the souls of faculty, staff, and students across our university system.”

Professors Kealoha and Lock are not only working with Brennan but also now with Dan Stringer, a Campus Staff Minister with InterVarsity’s Graduate and Faculty Ministries (GFM) who has returned to Honolulu after three years at the University of Southern California (USC).

“It’s amazing that there’s so much traction with faculty already,” Dan marveled. “Often you hear stories in GFM that it takes a long time to get started with faculty ministry.”

A year ago, in the spring, an annual dinner tradition was begun aimed at fanning the flames for more faculty prayer groups and fellowships on Oahu. “Now it’s a bonfire,” Brennan said.

Professor Kealoha observed, “When we pray, we strengthen whatever God has put in each of us as leaders. We are strengthened and we can flourish, because we have prayer.”

Will you partner with InterVarsity and our 2030 Calling so that faculty on more campuses can experience the power of praying together and partnering with God for his mission on campus?