Off the Charts and Fitting Right In 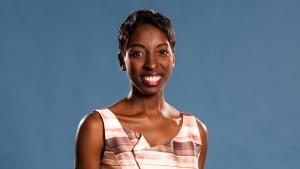 Chelir Grady tells people that she was created to be on staff with InterVarsity. “I love every moment of it,” she said. She loves it so much that she walked away from a lucrative and fulfilling engineering career with a generous employer because, “When I was at work I felt like I was wasting my time.”

Five years ago, Chelir had no clue that InterVarsity existed. When she attended Texas A&M University her spiritual life centered on her church, where she started a Bible study for fellow students and recruited friends for the church’s Sunday School and choir.

She graduated in 2009 with a mechanical engineering degree and began working with an energy company. Her work took her to Salt Lake City and Atlanta, before moving her back to her hometown of Houston.

Her introduction to InterVarsity came at Urbana 12, which she attended after starting seminary classes part time and going on a short-term mission trip to Peru. When she learned about the Urbana triennial student missions conference it seemed like a good place to learn more about missions. The third day of the conference she saw an invitation to a meeting to learn how to get more Black students to come to Bible study. Since she was leading a Bible study at her home, she decided to go.

At the meeting, Chelir was the one who ended up talking the most, sharing with the students who were there some of the Bible study tips that she had learned. The InterVarsity staff in attendance wanted to know who she was and asked if she was on staff with InterVarsity. She said, “What’s InterVarsity?”

After the meeting, Chelir had a long conversation that ended with an invitation to join InterVarsity staff. She brushed off the invitation, saying she had a job she liked that paid well and wasn’t interested in a job that called her to raise her own financial support.

But her curiosity was piqued. Back in her Urbana 12 hotel room, she researched InterVarsity. Chelir noticed the chapters at many Texas colleges but not at HBCUs (Historically Black Colleges and Universities). Soon she was telling someone she would like to start an InterVarsity chapter at Texas Southern University (TSU), an HBCU in Houston.

Chelir struggled with the idea of raising her financial support, until she realized that even a large energy company like her employer couldn’t provide unlimited job security. “If I’m putting my faith in something it should be in God,” she concluded, “because I know he will always provide.” When she got back to Houston, she told her employer she was quitting her job to go into vocational ministry.

The transition to ministry took longer than anticipated. Chelir’s employer offered to reduce her hours, saying they would rather have her part-time than lose her. She continued working at the energy company for two 10-hour days a week, and began ministering on campus for three days a week. On the weekends, she caught up on reading and wrote papers for her seminary classes.

Jason Thomas, InterVarsity’s Executive Vice President for Field Ministry, remembers interviewing Chelir when he was the Red River Regional Director. “Chelir was off the charts on our rating system, and we thought, ‘How is it possible for a non-InterVarsity person to score so high?’”

But with her church heritage (her grandfather and uncle were pastors), her volunteer church leadership roles during and after college, plus the home Bible study she led, campus ministry felt natural.  The church she began attending near the TSU campus helped her meet the students and faculty that she needed to become a registered student organization and the TSU chapter was officially launched in the spring of 2014.

With her schedule of off-campus work, on-campus work, and seminary studies, Chelir has had to develop student leaders quickly and the students have responded. Growth has been steady and the chapter is now made up of about 75 core students.

At the end of 2016 she finally said goodbye to the energy company and started working full time on campus.  She expanded her focus to another HBCU, helping plant a chapter at Prairie View A&M University northeast of Houston, and also began planting a Black Campus Ministries chapter at Rice University.  Chelir discovered she liked planting: “I plan to be planting chapters forever because there’s always another campus you can go to.”

But Chelir’s vision for ministry ranges far beyond campus. Back at Urbana 12, Chelir happened to share a meal with a man who graduated from Dallas Theological Seminary in 1987, the year she was born. As they discussed her ministry plans, he challenged her with this thought: "What if God has invited you to train students who will one day be missionaries all over the world?"

This summer, Chelir is part of InterVarsity’s Global Program in Kenya to see if she can find a way to move forward on that other mission that God put in her heart at Urbana 12, to help Black students become missionaries to African countries. As InterVarsity continues to pursue its mission of transforming students and faculty, renewing the campus, and developing world changers, Chelir has fit right in.