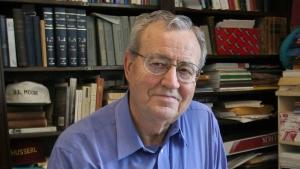 InterVarsity’s Graduate and Faculty Ministries marked its 30-year anniversary at the GFM annual staff conference this year but the story of Dallas Willard shows that ministry to graduate students and faculty is buried much more deeply in the DNA of InterVarsity. This was celebrated earlier in the year during a meeting of the faculty fellowship at the University of Wisconsin-Madison (UW).  As the faculty members and administrators gathered at the University Club, they were regaled with memories of the days when Dallas was a UW graduate student.

Dallas received his Ph.D. in philosophy at the UW, living and studying in Madison from 1959 to 1965. He was hired at the University of Southern California (USC) in 1965 and taught philosophy there for the next 47 years, until just before his death in 2013. Along the way, Dallas also became a leading evangelical writer and speaker, influencing many thousands through books like The Divine Conspiracy.

Gary Moon’s biography, Becoming Dallas Willard (InterVarsity Press), describes the five years spent in Madison as a graduate student and lecturer as a critical time for Dallas. Despite having previously attended three Christian colleges, being ordained in a Baptist Church in 1956, and pastoring at two churches, Dallas still looked for a transformational faith. “I was almost terminally ignorant about God and soul,” he said later.

At UW, Dallas discovered a new dimension of faith through the practice of spiritual disciplines. “What I had thought were merely the discarded practices of futile religion were actually things that, if rightly used, would help people change,” he observed.

One of the spiritual disciplines that Dallas practiced was the regular Sunday night fellowship with a handful of other graduate students in the home of UW Geography professor John Alexander, who was the InterVarsity undergraduate chapter faculty sponsor, and soon to become InterVarsity president.

"He (Alexander) felt that there was a need for something for the grads; he opened his home on Prospect Drive for us,” recalled Mary Daniel, emeritus professor in the UW Department of Spanish and Portuguese. “At Dr. A’s house nothing was off limits. You could ask anything.”

In the foreword to the study guide for The Divine Conspiracy, Dallas attributed many of the basic teachings from the book to this formative period. “Part of the first chapter comes from graduate school days when I was active in InterVarsity Christian Fellowship,” he wrote.

What Dallas appreciated about InterVarsity, he said at another time, “was that capacity to be biblically serious, to hold to the central teachings of what Lewis called ‘Mere Christianity,’ and yet to be open enough to be willing to discuss anything.”

Dallas faced a hard choice as his time at UW came to a close. He received his Ph.D. in 1965, and during the previous year he had not only been a UW lecturer, but he also pastored the Arena Congregational Church in a small town outside of Madison. Would he return to the pulpit as a full-time pastor or follow philosophy into the academy? What would it be, the pulpit or the classroom?

So Dallas accepted the invitation from USC to move to California. He became a fixture in the philosophy department, chairman from 1982-1985, and recipient of the USC Associates Award for Excellence in Teaching in 1977.

Joe Thackwell, InterVarsity’s Director of University Partnerships, got to know Dallas and his wife Jane as he planted a graduate student and faculty chapter at USC. He learned that Dallas would write his phone number on the board and tell students they could call anytime, “although if it was dinner time he may not answer.” Joe noted, “The call to pastor through his professorship was a family call that implicated his whole life in the way that missionary and pastor’s families often experience.”

Dallas spent hours and hours listening to students in his office and made a habit of long lunches with students and faculty, engaging them deeply. “He also made himself available to the whole Christian community at USC,” Joe said. “When he taught at the Trojan Christian Faculty and Staff Fellowship the numbers swelled.”

Working with former students and current USC staff, Joe established a memorial plaque that now hangs in Mudd Hall, the home of the USC Philosophy Department. The plaque lists four worldview questions that Dallas used in his lectures and listed in his book, Knowing Christ Today. Joe believes that it is the only such memorial to a professor on the USC campus. 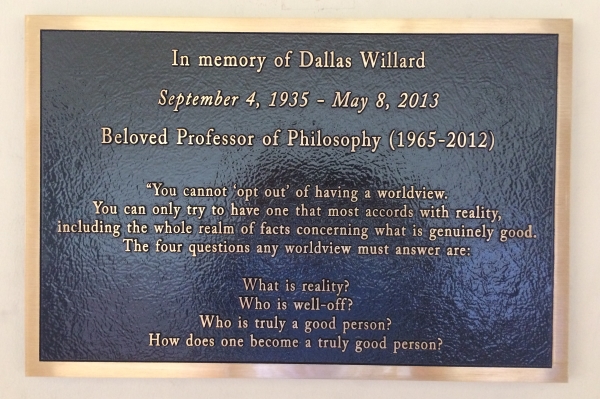 Dallas almost never said no to an invitation to speak. Through his counseling, books, and lectures about Christian living he was able to disciple as many people as a professor as he could have as a pastor, maybe more. And the formative fellowship he attended during his UW days illustrates the importance of graduate student ministry.