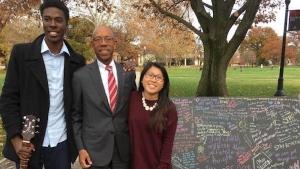 The day after an angry man crashed his car into a building on the Ohio State University (OSU) campus and attacked students with a knife, InterVarsity students mobilized a compassionate response. They erected a “Wailing Wall” on campus that offered fellow students an opportunity to lament and express their fears and hopes. Students also prayed with those who wanted prayer.

The man, Abdul Razak Ali Artan, was shot and killed by a responding police officer. Eleven students and faculty members were injured in the attack. The campus was on lockdown for just over an hour and classes were called off for the rest of the day.

“When it was revealed that the attacker was an OSU freshman, ethnically Somali, and religiously Muslim, the level of fear on campus rose palpably,” said InterVarsity area director Rachel Bobbitt.  “Somali and Muslim students feared retaliation with racism or violence. So it was deeply meaningful when a Muslim woman came to our wall on Tuesday and shared her thoughts.” Ohio State University president Michael Drake also stopped by and expressed his support for what the InterVarsity students were doing.

The Muslim woman who came to the wall stayed for three hours, and even helped bring other people to the wall. She was already friends with some of the InterVarsity students and had participated in some previous InterVarsity activities.

“The campus was seeing Christians and Muslims reconciled together, right before their eyes, which is a unity and trust rarely seen,” Rachel said. “This was not just a symbolic action; important spiritual work was done and lives were changed.”

The “Wailing Wall” came out of an extended time of prayer shared by InterVarsity staff and students the afternoon after the attack, as they considered how to respond. They chose an expression similar to Proxe Stations—artistic displays that are often used to open up dialogue about spiritual issues with students. Students from all five of the InterVarsity chapters at OSU participated when the wall was set up on the day after the tragedy, dialoguing and praying with fellow students who stopped to share their concerns.

Some of the InterVarsity students shared about their experiences as they helped lead the campus in a response to the crisis:

“One girl in particular said she grew up around Christians but trust was broken and she was unsure of what she believed. She thanked us for being there and said that her faith in the Christian community was a little bit more restored because of what we were doing and how she saw people being encouraged. I feel like God was using our response to spread the gospel on campus.”

“Our mural actually exceeded my expectations. I have bad allergies right now and yesterday may have been really tiring for me but I knew I needed to be at that wall. Lots of students wanted to say something but didn’t know how to put it into words, so I’m glad we were there to offer encouragement and ‘be the light’ on campus. I’m proud of what God did yesterday and that he was able to use us.”

“I think God really showered everyone with warmth. Every person that came wrote or drew something encouraging. Some people were compelled to have conversation or stick around. One or two people decided to hug us as well. We saw so much kindness yesterday in contrast to the violence of Monday.”