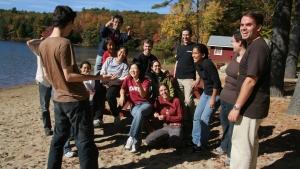 (Madison, WI) – We are focused on reaching every corner of every campus in the U.S. by the year 2030. And we want those chapters to be communities that study Scripture and experience deep discipleship. InterVarsity believes that getting off campus for special experiences like retreats, leadership training camps, and Global and Urban Programs are critical for students.

Over the past three years, InterVarsity chapters brought students to 105 camps across the country. We believe we can increase the number of students who go to camps by removing barriers like long travel times and allowing chapters to use camps proximate to their campus.

As a result, over the next several years InterVarsity will transition ownership of our three retreat and training centers: Cedar Campus in the Upper Peninsula of Michigan, Toah Nipi in New Hampshire, and Campus by the Sea on Catalina Island off the coast of California.

“Many of us on staff with InterVarsity have stories about how God met us and grew our faith while at camp, so this is a difficult decision,” said InterVarsity President Tom Lin. “But our value for camping ministry is as high as ever. We know the Lord uses time away at camp to powerfully transform students and whole chapters.”

Ninety-five percent of InterVarsity chapters who do camping ministry currently use camps that are not owned by InterVarsity, choosing camps that are more accessible to their campuses. For the chapters that have continued to use our camps, high travel times and costs have meant many students are simply unable to go, which has led to significant attendance declines in recent years at our camps.

InterVarsity has begun a process of seeking ministries willing to take over ownership of each camp, starting with Cedar Campus. Programming at all three camps will continue as scheduled for all of 2019. More information on the transition is posted in this Q&A.