Praying to Reach Every Campus in Montana 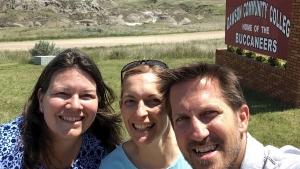 Montana is not Alaska or Texas, but it's still a pretty big state. A 3,290-mile road trip is not long enough to visit every campus in the state although it’s a good start.

Kristin Wright's 3,290-mile road trip last June took her to 12 campuses as part of the EveryCampus initiative, a partnership between InterVarsity and other ministries, which has a goal of seeing every campus in every state prayer walked in 2019. All but one of the other eight Montana campuses have been prayer walked, and the final campus is scheduled for a visit later this month.

Almost two thirds of the 4,948 US campuses have been prayer walked since the beginning of the year, and the number grows daily. Kristin, InterVarsity's Area Director for Montana, has had her imagination captivated by InterVarsity's 2030 Calling of catalyzing Christian community on every US college campus by the year 2030.

“I don't want to miss out on being a part of something only God can do,” she said. “We are committed to empowering and equipping whoever is in these places to reach these campuses.”

Kristin partnered with other staff, students, volunteers, and faculty as she prayer walked each of the 12 campuses. She debriefed the prayer walk afterwards, especially with students. "They often start out feeling like this is something they can't do but they come back with a lot of joy," she said. "We're building an infrastructure of faith."

Three of the campuses that Kristin walked were tribal colleges without any apparent current ministry. That included Salish Kootenai College in Pablo, which has a reputation for training future tribal presidents. "As we prayed, I had a sense of what God might do when birthing a native witnessing community on this campus," Kristin said.

For others who might also be captivated by the 2030 Calling and want to prayer walk a campus, Kristin has three recommendations:

Kristin was a University of Arizona student when she first discovered InterVarsity and then discovered that it was a good fit for helping her grow as a Christian. “I fell in love with Jesus even more as a student,” she said. “As I have been exposed to other faith traditions through InterVarsity my picture of God has gotten bigger.”

Kristin has been on staff with InterVarsity for 20 years. Celebrating two decades of student ministry sparked the idea of going on the six-day road trip to pray for Montana’s unreached campuses. "I have the best job," she said. "A 3,000-mile road trip doesn't feel like much when your heart is full of gratitude."

If you feel called to prayer walk a campus (or campuses) near you like Kristin and thousands of others have, go to EveryCampus.com to help reach the goal of every campus being prayer walked by the end of 2019.