Something Clicked at Chapter Focus Week 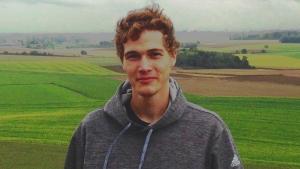 Chapter Focus Week completely changed Parker’s mind about InterVarsity. As a freshman, he was ambivalent about the small InterVarsity chapter that he was invited to attend at Franklin & Marshall College (F&M) in Pennsylvania.

“I was definitely ready to get involved in a Christian community in college,” Parker said. He had grown up in a Christian home and attended a Christian high school. But nothing clicked until after his freshman finals were over, and he spent a week away at Chapter Camp with InterVarsity students from other area schools, studying the Bible, receiving leadership training, and learning about InterVarsity’s vision for campus ministry.

He was hesitant at first. Chapter Camp would take time away from his summer job without bringing in any income. “I prayed about it, talked with people, and finally decided to go,” he said. “It was huge for me in becoming a part of the InterVarsity community.” Parker made some solid, long-lasting friendships and learned the joy of inductive Bible study. And he was even more excited about joining his chapter’s leadership team for his sophomore year.

Parker took advantage of every training opportunity that was offered after that. At Fall Conference his sophomore year, he met Sam, who became one of his best friends. In the spring, he participated in the Washington DC Urban Plunge. That was where God really began to work on him, as he learned to put his faith into action in an unfamiliar, cross-cultural setting.

Parker admitted that he has a tendency to “jump at stuff.” He was studying abroad the fall semester of his junior year when his InterVarsity staff minister invited him to attend InterVarsity’s 2018 Ambition conference. “I didn’t know what my ambition was at the time,” he said. “But I wanted to see God’s kingdom grow, so I decided to go ahead.”

At Ambition, Parker and two other students from F&M were challenged to creatively reach out with the gospel message to fellow students. And that’s how they came up with the idea of Reverb, a night of worship and music.

“We wanted it to be something where we could invite people from campuses that don’t usually go to InterVarsity, but also to invite different campuses around the area,” Parker said. His experience with InterVarsity has shown him that musical worship can have a lasting impact on people’s lives.

Almost a dozen different campuses were represented that spring at the first Reverb. They repeated it in the fall, and this past spring the neighboring InterVarsity chapter at Penn State Harrisburg took over sponsorship. Parker thought Reverb invigorated the campuses of F&M and Penn State Harrisburg with a deeper, more passionate spirit of worship. Christian students at a number of local campuses became better connected with one another.

Parker’s passion for music and language also led him in another direction: writing and scoring a German opera focused on the execution of the Apostle Peter as an independent study project. The opera was performed on campus in April, but Parker says he’s still polishing it.

“Studying Peter and seeing how God’s grace came even in the last moments of his life, that was powerful for me, working on it,” he said. “It’s been cool to see how God can use music and poetry in that setting, both things which I really care about.”

As Parker has observed the Holy Spirit at work on campus through ministry, he’s felt a growing desire to see the same thing happen in business and hopes to use his degree in business to that end. Working on his chapter’s leadership team with people from all kinds of different backgrounds—religious, cultural, and ethnic—gave him a passion for the strength of diversity. “One of the biggest things I have learned from InterVarsity is how to work purposefully with Christians from different backgrounds,” he said.

One of Parker’s memories from that first Chapter Camp was when the seniors in the group left early in order to get back to campus for graduation. He returned to Chapter Camp each of the following three years. “Every year just got better and better,” he said. This year he was one of those seniors who left early.

“Chapter Camp was the first time that I felt I was invested and could understand why people from InterVarsity invested in me,” he said. The investment paid off. Parker is now preparing to invest what he has learned through InterVarsity in his new career in business.