Jesus Is Not American | InterVarsity
Skip to main content 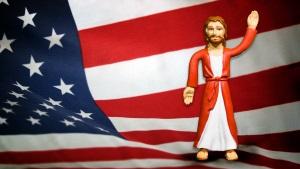 What does it mean to be American?

As someone who is both Black and White; someone who has family that comes from both places of privilege and places of marginalization; someone who has close family members who are Democrat and some who are Republican, this question feels tense and weighty. It seems as if, in these times, to be American has meant to defend political views you stand firm on and oppose others who believe and think differently. During this election season, I found myself in arguments with family members whose political views felt offensive to my existence. I found myself pushing conversations to the point of insult for the sake of finding assurance in what I believe to be true. The question of what it means to be American has very different connotations for me than it does for family members, whom I love dearly. And yet though I know this to be true, I found this question creating walls of separation in my family, in my church, and among my friends. And as I look up at what is happening culturally, I see similar walls being built because of the way this question is being answered.

For me, the answer to this question has felt like it lies in the unlocking of the concept of freedom. A correct answer could provide safety and security for me, and my family, but if we answer the question incorrectly, then safety and security are at stake for me and those around me, those who look like me. So I suspect that, for many in this country, getting the answer correct feels critical—so much so that our lives seem to be centered around answering the question, and living out the answer for all to see.

Learning to Ask the Right Question

But I think we are asking the wrong question. Because even the most positive of values that are upheld in the word American have been pursued historically with the most negative of undertones. Freedom has been pursued at the expense of others being exploited. Safety and security have been fought for at the expense of others being marginalized. Whatever our political views, we cannot possibly fully stand on the idea of being American without also embracing the conflicting history that comes with it. And as a Christian, I’m asking how I reconcile those things.

It seems as though our pursuits to defend the things we believe in so strongly have caused us to remain blind to how others might be experiencing pain and suffering. And it seems as though our desire to find answers to “What does it mean to be American?” has caused us to ignore other questions that people around us might be asking that are more prevalent to their lives. Might it be possible that somehow we’ve become more concerned with being right than we are with being lights (of the world)?

Here’s some simple truth: Jesus is not American. Jesus didn’t come to create a blueprint for Americans to be Americans. But it seems as though our identity as Christians has blended with our identity as Americans, where it is often hard to differentiate what value comes from where. Because in America, we have substituted the freedom that was given to us by God the Father (Galatians 5:1) for false freedom that was established by human fathers. In America, we have substituted the safety and security we have in the hands of God the Father (Psalm 91:1-2) for safety and security found at the hands of human fathers. In America, we have substituted the goal of building the kingdom of God (John 18:36) for building the kingdom of this country.

So the new question I have been asking is, what does it mean to be a Christian in America?

This American question has divided us, and the world is watching the internal implosion of the Church. But they are also looking for hope. And as long as we are asking the wrong question, we are unable to show them the hope we so desperately desire that they see (Colossians 1:27).

By Christopher K. Lee
Jesus Is Not Your Trophy

A Pharisee and a tax collector walk into the temple.

American Exceptionalism and Civil Religion
The idea of America's special place in history has been a guiding light for centuries. With thoughtful insight, John D.

Rescuing the Gospel from the Cowboys
The gospel of Jesus has not always been good news for Native Americans. But despite the far-reaching effects of colonialism, some Natives have forged culturally authentic ways to follow Jesus.
Login