Jesus Is Not Your Security Blanket | InterVarsity
Skip to main content 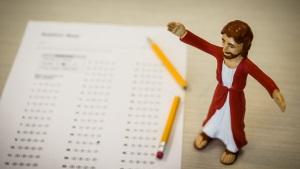 As I sat down with a student I was discipling, she boldly said, “It’s okay; I don’t need to worry about my job, because God knows the plans he has for me, and they’re for me to prosper and what not.”

Ignoring the fact that she blatantly took the Scripture verse out of context, I pressed her to explain what she meant. Since she loved God, she reasoned, it would all turn out all right.

Learning from our mistakes makes us better followers.

In middle school, my mom was known for being “the strict mom,” and I got punished a lot, mostly for trying to quit something. She was relentless about making me finish everything I started, regardless of how much I screamed or cried.

Now, as a strong woman who never quits (even when I probably should), I am thankful for all the times she put me in time-out or refused to let me attend a party to discipline me, and for the numerous other imaginative ways she used to make her point.

Jesus loves us more than a good parent. He wants us to learn from our own bad choices. And as he allows us to deal with the consequences of our sin, we learn to follow him more closely. Just as it was hard for my mother to hear me yell at her, it cannot be easy for God to watch us be in pain. However, he loves us enough to force us to learn from our own mistakes so that we can live a more full life, a life within the boundaries that the Lord provides.

Hardship can be a good thing.

Our culture tends to demonize hardship. I hear friends say that a dating relationship is too much work. Or college students tell me their major isn’t for them because they’re struggling in their classes. We have created a world that tells us things must be perfect and easy to be right and good.

However, that isn’t the picture we see in Scripture. In the Old Testament, Joseph was sold into slavery by his brothers, which led him into a series of events that were unfair and wrong but that ultimately led to him being a leader under Pharaoh, which then allowed him to save both the Egyptians and his own family from famine.

In the New Testament, we read about Paul’s jailors coming to know Jesus. It appears that he was testifying up until his dying breath to those who were holding him captive. These examples are further bolstered by Jesus’ own words, where he tells his followers in John 16 that they will suffer. He concludes, “I have told you these things, so that in me you may have peace. In this world you will have trouble. But take heart! I have overcome the world.”

Often the hardships we experience can lead to an opportunity for us to show God’s glory to others.

During recruitment for our sorority one year while I was a college student, a sister complained that I had talked too much about the Bible and was scaring away potential new members. When the recruitment chair and president came and talked to me about it, I remember thinking how ridiculous the situation had become. I couldn’t remember talking about the Bible to any new members and honestly thought the whole thing was made up. However, as I listened, I sensed God say, Let me handle this. So I apologized for making anyone uncomfortable and then began to pray.

Later that night, the president came back to me and said that the way I had handled myself was different than she had expected. Many of our sisters had apparently treated her poorly during recruitment. She thought I was treated unfairly too, but was so impressed with how I handled the situation that she wanted to check out the Bible study.

God can take horrible situations and create opportunities for us to share about him with others and reflect his light. And while he’s never happy with the sin (ours or other people’s) and brokenness of the world that leads to those hardships, when we respond to situations with grace and love, he is glorified.

The idea of hiding underneath a Jesus blanket that keeps us safe from any worry or hardship might seem appealing. But God wants more for us. He loves us enough to allow us to face the consequences of our sin. He values us enough to give us the opportunity to partner with him in his kingdom work by taking risks—and even suffering—for the gospel. And he cares for us enough that he wants us to live a life that is worthy.

I used to think that as a Christian, I just had to go to church and generally follow the Bible, and God would take care of the rest. Jesus was in charge of everything, I figured, and my job was to sit back and watch him work.

However, as I grew in my faith, I realized that God wants me to be part of his kingdom mission, and that as I took opportunities of faith to partner with him, I grew as a believer. And though none of my steps of faith have put me in actual danger so far, they have pushed me to step out of my comfort zone and experience discomfort and fear of failure.

When I was in college, my InterVarsity staff asked me to lead an investigative Bible study for my water polo team. I was terrified to take that step of faith. I was afraid my teammates would be offended. I was afraid that they wouldn’t come. I was afraid it would be a failure. But with my staff minister’s help, I did start a study, and 18 women came to discuss Scripture.

Working with God to reach my teammates taught me to trust the Lord and take a risk—and as a result, I got to see his kingdom come to my water polo team. It would have been easier and more comfortable to not start a Bible study. I did face some ridicule from a teammate who wondered what made me qualified to lead, since I was just a sophomore. But I learned that without risk, there is no chance of success.

The hardest thing I have ever done in my life is plant a new Greek InterVarsity chapter at the University of Georgia. In raising funds for the chapter, I struggled to convince people that giving money to reach fraternity and sorority students was a good idea. I have struggled to stand up to ridicule from family members and friends who don’t understand why I’ve given everything up to follow God. I have dealt with my own sin and had to work through my pride. But through every obstacle, the Lord has taught me more about himself and about the freedom of following him.

Partnership with God allows us to take an active role in his mission and to live a life that glorifies him. He doesn’t promise that it will be easy; in fact, he’s clear that it won’t be. But as we take the opportunities he gives to step out of our comfort zones, we get to see his kingdom come where we are.

Because I’ve followed him despite the risks and the hardships, I’ve seen what Paul means in Romans 8:15: “The Spirit you received does not make you slaves, so that you live in fear again; rather, the Spirit you received brought about your adoption to sonship. And by him we cry, “Abba, Father.” Because Jesus is not my security blanket, I’ve learned to not live in fear, but rather to live as God’s child, trusting him to lead me in a life that might not be safe, but is abundant and purposeful.

By Andrew McCarty
Jesus Is Not Your Sports Buddy

In our roughly 12x12 family office (with about 6.5-foot ceilings, I might add), I embarrassingly have 39 items with a San Francisco 49ers logo on them.