The Power of Praying the Magnificat Daily 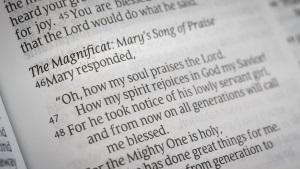 For the last five years, I’ve been a part of a religious community that prays the Magnificat—Mary’s song of praise upon finding herself pregnant with Jesus—twice a day. Like any repeated habit (squinting, smiling, stretching, etc.), praying the Magnificat is leaving its mark. It has confronted and reoriented me. In recent days, I find Mary’s song speaking to the challenges of our cultural moment. It has provoked difficult questions, raised me to new heights, exposed sin and idolatry, and left me speechless in awe and wonder.

Sadly, however, the Magnificat is often misunderstood and misapplied by various interpretations that each latch on to one aspect of Mary’s song, elevate that aspect as the main point of the story, and then apply the song to fit a particular worldview. There are at least three popular interpretations that do this.

One popular route of interpretation—especially among Roman Catholics, in some Eastern churches, and within parts of Anglicanism—is to emphasize Mary’s exaltation within the Magnificat. This is understandable. God is accomplishing his purposes through Mary. It is, after all, her song of praise.

Unlike with Elizabeth and Zechariah, whose words of praise Luke attributes to a special filling of the Holy Spirit (see Luke 1:41-45 and Luke 1:67-79), Mary’s song apparently emerges from an ongoing posture—evidence of her very special heart. Her response to God’s call puts patriarchs like Jacob and prophets like Moses to shame. Mary even inserts herself into the poem, “Surely from now on all generations will call me blessed; for the Mighty One has done great things for me.” She is indeed a unique and blessed woman, whose example and name ought to be venerated throughout the generations.

I have experienced great benefit from contemplating Mary’s role in the story of redemption, including some experiences in prayer that would make my Protestant friends blush. But when the interpretive tradition elevates Mary as the main character, a particular story begins to take shape. And I think we need to resist this interpretive strategy because the text resists it. The emphasis of the prayer firmly rests on God, the Savior, the Mighty One of Israel. Every sentence in the prayer except for the first two has God as its subject, and even in the first two sentences God is the agent or actor, through whose generosity and favor Mary finds herself chosen and blessed. She is a fascinating character, whose role in redemptive history should be contemplated by more Protestants, but to elevate Mary to be the main character twists the prayer out of shape.

And Holy Is His Name

More palatable to traditional and evangelical Protestants and to some in the charismatic and Pentecostal traditions is the interpretive lens that focuses on God’s character and the soul’s response to God.

There are commendable aspects to this interpretive approach. One is that it treats the Magnificat first and foremost as a hymn of praise to God. The poetic structure and focus of the song are doxological. God is the agent in the hymn, and many of God’s characteristics are specifically praised. His mercy is mentioned twice. His might or power is evoked multiple times. And his faithfulness, holiness, and saving help are woven through the poem.

However, while it is right to celebrate the wonder and righteousness of God, the story that emerges from this interpretive tradition is too often ahistorical and depoliticized. Editor and writer David Neff laments in his Christianity Today article “Misreading the Magnificat,” “It is hard to find Christian hymns that embody Scripture's sharp critique of the rich and the dangers of wealth.” Mary’s song has a pointed political critique that shouldn’t be ignored, with lines such as: “He has cast down the mighty from their thrones. . . . He has filled the hungry with good things and sent the rich away empty” (Luke 1:52-53).

Thus, like the elevation of Mary to a central character, this interpretive strategy also needs to be rejected because the text rejects it. Yes, the Magnificat celebrates and sings of the wondrous nature of God, but we know God’s wondrous nature through God’s raising up the poor and deposing the proud. Mary’s song, like Hannah’s in 1 Samuel 2, places its affirmations within the context of a robust political and covenantal theology.

Post-evangelicals and mainline Protestants enthusiastically affirm the Magnificat’s political theology, seeing it as a revolutionary hymn meant to energize the church’s witness through acts of justice. This approach takes the second part of the Magnificat seriously, teasing out the cultural and political context in which the song was composed and sung—in an occupied land by a woman without means.

The story that begins to emerge out of this interpretive tradition is one of prophetic critique and political reorientation. Justice is God’s cause. God is seen to be on the side of the oppressed, poor, and humble, and he will accomplish justice by raising them up. Mary’s song—a defiant song from the margins that indicts the powerful and gives voice to the oppressed—anticipates these purposes of God.

This interpretation increases in plausibility as we consider the ways that the church’s mission has been coopted by unjust political ideologies. World mission and colonialism have collaborated in ways that have drastically undermined the integrity of the gospel. Church leaders in the US supported slavery, segregation, and the subjugation of women. For Christian faith to have plausibility in a contemporary world fractured by injustice and suffering, it must both renounce unholy alliances to oppressive power and offer words of hope to those on the margins.

As one who has sought to understand and live out the liberating and humanizing message of Jesus Christ with the marginalized for more than 20 years, I nevertheless reject this interpretive strategy for the same reason as the ones above: because the text rejects it.

Mary’s song of praise contains its political theology within a larger framework of God and Israel, and this interpretation screens that out, essentially ignoring the covenantal theology of verses 54 -55. God’s political acts of liberation are not tied to an abstract notion of justice but rather to him specifically “remembering his covenant” with Abraham and Israel. The social and political dislocation that Mary, Elizabeth, and Zechariah find themselves within started more than 400 years earlier with the Babylonian exile. The oppression had taken many forms (rulers, the proud, the rich) but now at last, God was going to remember his covenant and bring his messiah.

To make the Magnificat a song simply about political liberation in general twists the song out of shape and runs the risk of aligning it with another oppressive political agenda.

The Magnificat has thrived and been best understood and appropriated in communities that follow the principle lex orandi, lex credendi: the law of our prayers is the law of our belief. This strategy, while insufficient for the whole of Christian life and theology, is in the best position to interpret and apply those parts of Scripture that are themselves prayers.

This prayer is not simply a devotional experience, however. Praying the Magnificat ought to create new categories of understanding in our mind and heart. In prayer we receive an invitation to come and magnify the Lord with Mary, to enter her story, and through it to see into the heart of God.

The preamble to the story is an appreciation for the woman whose words we borrow. The mystery of Mary’s song will remain closed to us if our hearts remain dull to this remarkable, courageous, and faithful young woman. To put it another way, Mary is not an “everywoman” character in the New Testament. How is it that this simple girl from Nazareth was able to offer the unqualified yes to God’s invitation when prophets, priests, and kings did not? As we pray her prayer we imitate her faithfulness, courage, and devotion.

At the center of this story is Israel’s God, the Mighty and Holy One, who abounds in love and mercy (Exodus 34). This God has done for his people what he promised. In Jesus, the Messiah, God’s great reversal has been accomplished. In Jesus, we see God’s immense love for the marginalized and his refusal to adopt the strategies of coercive power. In Jesus, we see God’s covenant fulfilled and his faithfulness extended to the nations. In Jesus, we commit to seeing his generosity and justice play out in our homes, communities, cultures, and nations.

We also, as we pray the Magnificat, consider our own social location and ask whether the shape of our lives, including our worship life, points toward Jesus in worship, witness, and wonder. We examine ourselves to discover and root out ways we have aligned ourselves with the forces of spiritual death and disintegration. And we offer ourselves—our souls and bodies, like Mary did—to God’s service, not as begrudging servants but as those who can join with her in joyful acclamation: “My soul magnifies the Lord and my spirit exalts in God my Savior.”

What might happen in your life with God if you entered into Mary’s story by praying the Magnificat regularly? How might its vision of God reshape your perspective? What might happen in our communities if they were formed through regularly praying these words together? Perhaps our vision would be a little less polarized, our wonder reawakened, and our wills strengthened.

Jason Gaboury serves as the National Director for Alumni Relations. You can support his ministry at donate.intervarsity.org/donate#890.

Luke
In this latest volume in the highly regarded Reformation Commentary on Scripture series, volume editor Beth Kreitzer introduces us to the wisdom and insight of familiar and unfamiliar reformers alike

A Book of Prayers
In the spirit of the Book of Common Prayer, Art Nelson provides a new collection of public and private prayers for individuals and communities.
Login