Alec Hill: My Top Ten Books of the Year 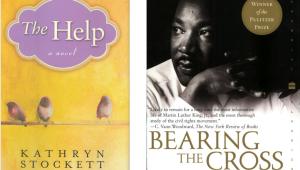 Every year, I have the great pleasure of presenting my favorite books. A highlight was discovering www.audible.com, a reading service that downloads to my I-Phone.

I have not yet seen the movie, partly due to the fear of all readers – that it won’t match up to the book. And what a book it is! First time author Stockett has penned a modern masterpiece of two-tiered life — one White and the other Black — in Jackson, Mississippi, in the 1960s. Alternately infuriating and inspiring, this tale of racism and courage is brilliantly told.

This Pulitzer-winning book is reputed to be the most comprehensive account ever written about Dr. King. Based on over 700 interviews, personal papers, and FBI documents, the reader is taken into the core of Dr. King’s life. While showing his imperfect side, the author never loses sight of Dr. King's achievements or the power of his conviction that "the cross is something that you bear and ultimately that you die on."

Appropriately, the first volume of this excellent, new IVP series focuses on the book of Galatians. It is, perhaps, the most cited biblical text by the Reformers, particularly on the doctrine of justification by faith.

Familiar voices such as Martin Luther and John Calvin abound. But it is the voices of lesser known figures that lift from the page. My new favorite is Wolfgang Musculus, a German theologian who also composed music and wrote poetry.

4.The Count of Monte Cristo by Alexandre Dumas (Simon and Brown, 1844)

Along with The Three Musketeers, this is considered to be Dumas’ most famous novel. A sprawling narrative of betrayal, revenge, and mercy, the plot is centered in the Bourbon restoration after Napoleon. A promising young sailor is falsely accused, sent to prison, escapes, establishes a fortune, and then seeks retribution. But along the way, he learns something about grace and forgiveness.

Did you know that the 1917 Mexican Constitution enshrined an anti-clericalism so severe that hundreds of Catholic priests were executed and over 90,000 people perished in a religiously-based civil war? Neither did I.

In this powerful novel set in the 1930s, a renegade "whisky priest" is on the run from the law. Neither devout nor righteous before the persecution, he becomes a redemptive figure in the end.

6.Destiny of the Republic: A Tale of Madness, Medicine and the Murder of a President
by Candice Millard (Doubleday, 2011)

In modern presidential campaigns, it's almost impossible to imagine someone being nominated against his or her will. But, that was the case with James Garfield, one of our country's most extraordinary leaders. Born into deep poverty, he pulled himself up through sheer brilliance and strong moral character to become a Civil War general and a highly regarded congressman.

As president, he stood on principle against a corrupt political establishment. Tragically, just four months after his election, a crazed office seeker shot him in the back. Even more tragically, he would have lived but for the medical malpractice of an incompetent doctor.

Adam Hochschild is one of my favorite historians. His earlier works focus on ending the British slave trade, fighting the horrors of colonial Congo, and understanding post-Stalin USSR.

His newest book takes a hard look at the senseless carnage of World War I. But rather than simply telling the stories of famous generals and politicians, he tells the stories of long-ignored critics of the war – conscientious objectors (including many Christians), socialists, and reformers.

8.You Lost Me: Why Young Christians Are Leaving Church...and Rethinking Faith by David Kinnaman (Baker Books, 2011)

Kinnaman’s first book, unChristian, focused on non-Christian young people who reject the faith. In this sequel, he looks at the other half of the equation – young people raised in the church.

His conclusions are sobering: 60+ percent of 16-29 year olds reared in the church are abandoning the faith. His solution? Increased life-on-life discipleship. I recommend that this book be read in conjunction with Kara Powell’s Sticky Faith.

9.Mr. Clemens and Mark Twain: A Biography
by Justin Kaplan (Simon and Schuster, 1991)

Samuel Clemens is portrayed as a triumphant-tragic man. Outwardly whimsical and humorous, he is inwardly suspicious and critical. His Christian fiancée marries him, hoping that he will come to faith. Over the ensuring decades, the opposite occurs. This Pulitzer-winning biography captures the highs and lows of a brilliant yet cynical man.

Ok, I realize that I should have read this novel in high school… For some reason, I always shied away from what I feared would be pretentious and self-indulgent. To my surprise, I was captivated by the illusory aspirations of middle-class Jay Gatsby and by the shallowness of his affluent love interest, Daisy Buchanan. A morality play writ large.

Alec Hill is the president of InterVarsity Christian Fellowship/USA

Oh Alec Hill! I am excited to

Oh Alec Hill! I am excited to see your writing here on this blog and eagerly anticipated discovering what you might consider your ‘top ten books of the year. I have such admiration for you and IVCFs great work for justice, and yet was disappointed by this list. You list ten books, and yet none are by an author of color, only one by a woman. You list two books ABOUT people of color, but both written by white authors. Though it can be done well, such writing is also problematic in that it carries some ‘white savior’ baggage (And The Help is certainly problematic: http://tiny.cc/0innl )--especially when not balanced by an inclusion of books written by the marginalized communities being portrayed. This does not deny the well-written nature of the books you selected, both current and classic, but there are many that might have provide some needed perspective. We must remember some of the systematic factors that often hinder such books from rising to prominence. I humbly suggest that we must be intentional in modeling our multicultural values—to the point that, even if we now currently read works by authors of color and of women, that we also read enough of them to grow to count some of them as our favorites.

oops! I attached the wrong

oops! I attached the wrong link! The discussion of The Help is found here: http://tiny.cc/0innl My apologies! -Katelin