The Authority of the Bible | InterVarsity
Skip to main content

The Authority of the Bible 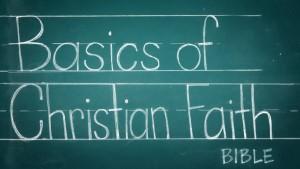 These days it’s no less important than in ages past for us to understand Christian doctrine. So we’re offering you brief monthly posts about what Christians have historically believed are the core teachings of the Bible. We hope you find that these historic teachings not only broaden your understanding of Christianity but also deepen your love of God.

Christians differ in their convictions about the authority of the Bible. Among the broad spectrum of Christians of various theological perspectives, the Bible is described in different ways, from a collection of social documents written by people of faith with political and cultural biases to a unified, supernatural revelation literally dictated by God. Typically, there is intellectual correspondence between what Christians believe about the Bible’s authority and what they believe about its nature and purpose.

For instance, if one believes the Bible is a mere social document written by human beings with biased perspectives, the authority of the text is questionable, and every “thus says the Lord” is open to re-contextualization and updated interpretations. But when one believes that every word of the Bible is the very (literal) word of God, the authority of the text is unquestionable and absolute. Most Christians read biblical texts from a perspective somewhere between these two extremes.

Within the Protestant evangelical tradition, the Bible is usually described as the Word of God, a designation that recognizes the God-given authority of the text. And since the text is recognized as having divine origin and human instrumentality, biblical interpretation is regarded as a work of both the Holy Spirit and intelligent human study.

The Bible Assumes God Speaks to Us

In the Bible, whenever God speaks through one of his prophets, the biblical record assumes the divine origin of the words spoken. Likewise, early Christians and writers of New Testament texts assumed the Hebrew Bible (Old Testament) is the Word of God. The New Testament letter to Timothy (2 Timothy 3:16) declares about the Old Testament, “All scripture is inspired by God.” The Greek word theopneustos in this verse, sometimes translated as “inspired,” may also be translated as “God-breathed,” giving greater emphasis to the texts’ divine origin.

Despite popular misconceptions about the nature and purpose of the Bible (for example, that it was carried as one volume from heaven to earth by an angel; or that it is, like tarot cards, a source of divination; or that it is merely a collection of myths), its authority does not reside so much in the text itself as it does in the divine person speaking through the text.

That is why evangelical Christians do not idolize the physical book, as if a specific form of the Bible is imbued with supernatural powers. Such thinking is superstitious. Even Christians who differ among themselves about particular biblical interpretations usually agree that the authority of the Bible is based on the character of God.

The Bible is authoritative for Christians because God speaks to both individuals and communities of faith through its collective literature. And though the Bible is diverse in literary forms and writing styles, it contains one, harmonious revelation about God’s redemptive love for humanity.

The Bible Is Not a Crystal Ball

To say that the Bible is authoritative is not to assert that it is decisive about every topic we bring to the text. The Bible is not a crystal ball meant to answer all our questions about every aspect of human experience. Nor is the Bible a scientific textbook. But about every subject that the Bible does address (such as the divinity of Jesus Christ and the reality of sin) the biblical text is authoritative and declares the truth. And when the Bible’s words are interpreted rightly, its truths not only nurture our relationship with God but also direct our relationships with people of every ethnicity, while teaching us to better understand ourselves.

As the Word of God, the Bible speaks on behalf of the Creator, and in its speaking it claims authority over our lives, so that we—without deifying the text—honor it as God’s instrument for telling us the truth about himself. And when the Bible’s revelation is rightly understood through the illumination of the Holy Spirit, when we submit to the Bible’s authority as the Word of God, we shape our hearts and minds to biblical truths and discover that our lives miraculously conform to the character of God.

Jonathan Rice is a Senior Editor/Writer with InterVarsity. He has a BA degree in Religious Studies, an MA in Creative Writing/English, an MDiv in Theology/Pastoral Studies, and a DMin in Homiletic and Narrative Theology. He is an ordained Presbyterian minister and served as a pastor for nine years. Currently he works part time with InterVarsity and is writing a novel.

Read the first post in our series on Christian doctrine, “What Is the Bible?”

Or dig deeper into the authority of Scripture with this Bible study.