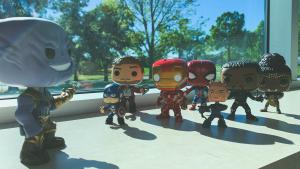 It’s safe to say that box-office-busting, tear-jerking, goose-bump-inducing Avengers: Endgame struck a chord in people across the world. And like other art forms, it provides an inside look into today’s Western culture, especially when we consider the movie from a Christian perspective.

Life in a Broken World

The plot and character development of superhero movies, some would say, have been the genre’s longstanding kryptonite. The films can be little more than a string of punches being thrown, buildings blowing up, and characters showing off their “little party trick” (#MarkRuffaloReference) with sparse exposition connecting them together.

But Endgame goes out of its way to hulk smash this mold. Early on in the film, the Avengers suit up to destroy the bad guy and save the day, as always, only to be confronted by something they’ve never experienced before: failure (of Thanos’s jelly-leg-shaking variety). Thanos, the film franchise’s ultimate supervillain, dies, no muss, no fuss. But his legacy—half the universe being reduced to ash—remains. And there’s nothing the Avengers can do about it (at least for the first hour).

For arguably the first time, these superheroes truly discover what it means to live in a fallen world, one with bigger problems than they can ever hope to solve. Like Adam and Eve after the Fall, they’re left with a bunch of broken pieces and a fading vision of what life used to be. The ways the Avengers react—vainly policing what remains of the universe, withdrawing from society in favor of video games and beer binges, and pursuing Batfleck-esque personal vendettas that toe the line between right and wrong—mirrors how humanity reacts to brokenness in real life. The despair and the depression these heroes face has real weight. There’s a sickening sense of mourning as Scott Lang discovers the memorial to the millions of people who have simply ceased to exist.

These moments go beyond fictional characters and get at the heart of humanity’s biggest problem. We need a savior, a true superhero who is far greater and more powerful than we can ever hope to be. In the wake of Thanos’s plot, the Avengers, like all of us, need Jesus.

For a refresher on Endgame’s predecessor, Infinity War, Thanos is scheming to eliminate 50 percent of all life. He finally succeeds by collecting six incredibly powerful Infinity Stones, and with a snap of the fingers, half of the universe’s population simply melts into ash—what’s now been coined the “Snapture” (if “Pokémon” made it into the dictionary, this will too . . . just a matter of time).

Regardless of where you fall in your theology of the rapture, it’s hard not to be intrigued that a comic book movie spawned such a biblical allusion. It testifies that the concept of a final judgment day is still on our culture’s mind, even 30ish years after Terminator 2.

Like I mentioned, the film’s imagery of life after the “Snapture” is genuinely gripping. It stirs our imaginations and raises tough questions: If losing half of all life could be so traumatic, how much more terrible will it be on God’s final day of judgment as it’s described in Revelation?

As the movie continues, its sense of mourning and loss shifts to desperation. The Avengers have to act. There has to be a way to reverse this cataclysm. That’s our natural instinct too. If we really, really try hard enough, if we’re willing to make large enough sacrifices (#whateverittakes), we can bounce back from this. The way the Avengers eventually respond in Endgame with their convoluted, time-traveling scheme (no DeLoreans required) ultimately embodies humanism’s unshakeable resolve that we really do have what it takes to pull ourselves up out of the world’s brokenness.

But as Christians, we know that no amount of hard work can save us from our sin. Endgame emphasizes just how critical Christ’s death on the cross was. And without God’s grace, the Avengers have no chance of reversing the “Snapture.”

One of the most refreshing things about Thanos, both in Infinity War and Endgame, is that he’s not just the typical world-domination-craving bad guy. He doesn’t just want to watch the world burn. He thinks he’s the hero. The Mad Titan truly believes he’s doing the right thing, making the hard choices nobody else is willing to make to end the universe’s senseless suffering.

Even though he’s the MCU’s ultimate bad guy so far, Thanos isn’t so much innately evil—or “pure evil” as Ben Mendelsohn’s John Daggett might say—as he is deceived. This hearkens back to Ephesians 6:12 where Paul writes, “For our struggle is not against flesh and blood, but against the rulers, against the authorities, against the powers of this dark world and against the spiritual forces of evil in the heavenly realms.” When people oppose Christianity or persecute us, we shouldn’t think of them as the villain we have to overcome. Like Thanos, they’re deceived, victims of the “powers of this dark world” and “spiritual forces of evil.”

Another key thing that Thanos’s actions reinforces is the existence of absolute truth. Postmodernism argues that truth is just another word. But good luck trying to find many moviegoers watching Endgame who don’t think that there’s something innately wrong in Thanos’s full-on obsession to save life by destroying it. The Avengers’ desperation to stop him testifies to this too. Deep down, we all know that what Thanos intends to do is wrong and should be unequivocally opposed.

Ultimately, Avengers: Endgame testifies to God’s general revelation of himself. Despite whatever personal agendas may have factored into the making of the film, the end product offers up moments that clearly highlight our need for a savior and our tenuous grip on life when we try solving things ourselves, especially with a limited supply of Pym Particles.

*Not to mention, this affords the perfect opportunity to make 15 nerdy references in one blog post (can you catch them all?).

Great use of sensory details!

Great use of sensory details! We really got the picture! p.s. We still remember your vocab words, this was very pulchritudinous writing! Also, how is Phil doing?!