Behold & Wonder: The Calling of a Christian Artist | InterVarsity
Skip to main content

Behold & Wonder: The Calling of a Christian Artist 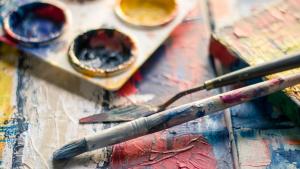 Stuck in my apartment these past two months, I’ve found new ways to release my pent-up creative juices. Cooking new dishes, baking breads of different types, and making Muppet missionary shows (yes, you read that right) energized my time in quarantine. I’ve always enjoyed experimenting with novel forms of expression, but there’s one in particular I’d like to share: designing T-shirts.

This side hobby may have only started just last year, but my interest has been growing for a long time. As a child, I recall window-shopping at all the T-shirts in the mall. One particular kind of shirt, Christianized company brands, still stands out in my memory. Facebook became Faithbook with the same logo styling, GodTube replaced YouTube, and ChristianChirp (now defunct) supplanted Twitter.

If Christian artists didn’t sing about Jesus or mention God, then I thought they were doing “secular” work. I assumed they weren’t brave enough to showcase themselves “for Jesus.” If you’re creative and grew up in church, maybe you’ve encountered something similar. Maybe you’ve been told, “Wow, you’re an excellent artist. Maybe you can draw something for the church!” or “Wow, you have a great singing voice. Do you want to lead worship some time?” Maybe you’ve been dissuaded from a career as an actor or actress because “those lifestyles are so worldly,” or you’ve felt the pressure to sing nothing but Christian songs at church.

You may have heard all this before and feel like you’ve been given two choices: become a person who only creates “Christian art” or someone who yields to the world’s pressures to create “secular” art as a Christian. What’s a Christian to do?

Christian Art or Art Made by a Christian?

The answer to this began to reveal itself when I found myself captivated by another kind of art: stories. Not only did my parents get my siblings and me to read C. S. Lewis’s The Chronicles of Narnia, but we listened to the entire dramatized series on our frequent long road trips together. The stories were clear and easy to follow for my young mind. The biblical messages were also obvious; even for my child ears, I could tell who Aslan really was, who Tash really stood for, and what the Last Battle really meant. It was so simple and obviously Christian, and it fit what I envisioned as Christian art.

A few years later, my family was introduced to The Lord of the Rings, a different beast altogether. My young mind sought to find the biblical analogies, just like in Narnia, but quickly became befuddled. Gandalf (spoiler) died and came back to life, but even so, I was told he was not a direct allegory to Jesus. Nor was Aragorn despite his return to kingship; nor was Frodo despite his selflessness in bearing the burden of the evil Ring. On the story’s surface, there seemed to be nothing explicitly Christian. Jesus was not a character. No one swooshed in to rescue everyone like God often does, and no “evil” character experienced true redemption. Is The Lord of the Rings “Christian art” then? My mold for the relationship between Christians and art had cracked.

As I sought to reconcile these tensions, I went first to Scripture. Does the Bible even say anything about art? No obvious answer stood out until I began to consider a single word: image. The Creator God made images of himself. We are his art. And he decreed our multiplication, calling us to usher more of his art and beauty into the world.

But his art chose to distort ourselves, seeking to become the Artist rather than representing him. And even as our decision to distort our art led us to create images, we decided to become like these images, further distorting our artful selves (Rom 1:23).

With this spiral of distortion, it was a wonder that the Artist didn’t scrub us and start over. Instead he himself became his art in Jesus. He showed us what it meant to be faithful images of the Artist, seeking justice, dispelling lies, bringing wonder, and restoring image bearers to our original purpose. Even when distortion attempted to force its ultimate perversion of art—death—on Jesus, he embraced it and came back to life, revealing a larger, grander image of the Artist than was ever beheld before.

Perhaps that is the call of the Christian artist: to follow Jesus by expressing and multiplying God’s “very goodness,” critiquing distortion, and calling image bearers to behold and wonder. Perhaps it has to do less with whether a song has Jesus in its lyrics and more if it captures the ideal to honor the relationships between art and Artist, between the Original and his image bearers, between expressers and beholders. By doing this, the Christian artist actually follows the greatest commandment to love God and love our neighbor (Mark 12:30–31).

Because of Jesus’ greatest commandment, we are to honor and respect the relationship between artist and audience, like all relationships. But in our fallen world, it has all too often been abused, and growing Christian artists too often find themselves in situations that compromise or hurt those relationships.

When an artist demands their audience to agree with their expressions, their art ceases being wondrous and becomes propaganda. Or on the other side, consider when the audience demands art to satiate their appetite for amusement. Rather than beholders, the audience becomes consumers, and the artist is held captive to the audience’s every demand. The resulting fallout can lead to reduced creativity, expression, and pitiful rip-offs. The shirts I fancied in my youth failed to contribute anything to the culture except a sly critique of the idolatry of brands (by copying them?). Movies like Sunday School Musical and Apocalypse were made to make money from the Christian market. Rather than our art bearing witness to the Creator of wonder, these actions communicate that we are empty of creativity, seeking only to mimic what sells.

Both Tolkien and Lewis avoided these pitfalls and expanded my understanding of what art made by Christians can be. Lewis sought to express his fundamental Christian beliefs through a story that, although obvious and clear, still allowed generations of readers to wonder. Tolkien sought to create stories about power and corruption, the nature of good and evil. Though they don’t serve as direct allegories of Bible characters, they are nonetheless so entrenched in biblical truths and understanding, one cannot ignore these threads woven throughout the narrative. In doing so, Tolkien is credited with the creation of the modern fantasy genre that continues to capture imaginations today.

Though I consider Lewis’s work “Christian art” whereas Tolkien’s is “art made by a Christian,” both were faithful in their art to God because they honor the relationship between artist and audience, between maker and beholder, between the ultimate Artist and those who are made in the Artist’s image. More modern examples include Chance the Rapper, who became the first Grammy winner who never sold physical copies of his music, director Scott Derrickson, who’s made hit horror movies, and Shin Maeng, who blessed the Urbana Student Missions Conference in 2018 with his depiction of the book of Revelation. Their work is art, not because it is successful or “makes secular art with secret Christian code” or “takes back the spotlight for Jesus,” but simply because their work expresses truth and wonder to our Maker and beholders.

To be clear, I am not saying that more overtly Christian art is inferior. Whether you are an art student or connoisseur or a burgeoning Christian artist, I long for us all to flourish and experience art as God intended, whether through dance or film, cooking or quilting. To freely follow in his gifting, we need not restrain ourselves to questions and comparisons of “Christian art” versus “art by a Christian.” I believe God is asking us a different question altogether: “How will you love me and your neighbors through your art?” We’d do well to reflect on this question, to listen and honor the relationships to whom art blesses—even when it comes to designing T-shirts.

By Rick Mattson
Why Minister to Artists?

Because it’s the human thing to do. That is, it’s the image-of-God thing to do. When we walk into the studio or theater and start talking with artists, we enter a world of creativity that represents the other half of God’s design for our lives.

The Faithful Artist
Drawing upon his experiences as both a Christian and an artist, Cameron J. Anderson traces the relationship between the evangelical church and modern art in postwar America.
Login