Building on a Firm Foundation | InterVarsity
Skip to main content

Building on a Firm Foundation 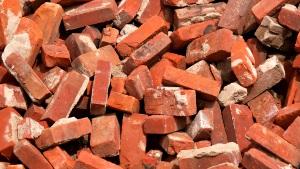 Black smoke rises from an old apartment building. Visible behind the gouged brick facade of a third-story residence is a child’s crib; a bathtub hangs in midair by a twist of copper pipes; a partial flight of stairs dangles like an afterthought and ceiling lights sway from recurring tremors.

But it’s not just the earth that sometimes trembles. Human tragedies can so shake Christians, their families, and their churches that they disintegrate into dust, revealing foundations no more substantial than sand.

Ours is an age of ideology. Globalism, nationalism, liberalism, conservatism, capitalism, communism, multiculturalism, feminism, and humanism, to list the most prominent among the Western world’s ideologies, reign as a pantheon of deified ideas.

In the hope of creating conversation between the church and these “isms,” Christians sometimes welcome ideologies into their congregation. But an ideology often insists on taking the most prominent place in a church, where it argues for softening the angularity of Christian doctrines.

Such softening is not entirely without benefit to the church, since it then must consider the clarity of its evangel and the compassion of its witness. But when the conversation results in a radical reimagining of the word “Christian,” a congregation’s biblical identity as the body of Christ may change into a more ideologically correct, hyphenated identity (such as Christian-feminist or Christian-conservative), and then its Christ-centered fellowship morphs into a more affinity-oriented, ideological community.

But it’s not only the unexamined assimilation of ideologies that changes a church. Sometimes Christians originate their own ideologies by substituting a doctrinally, sacramentally, liturgically, or culturally correct emphasis for a balanced biblical faith and enforcing such an emphasis by publically shaming nonconformists. Indeed, both churches and Christian organizations have been known to construct a cathedral of “Christian” ideology on the sandy soil of subjective experience, cultural trends, doctrinal preferences, or political prejudices, instead of basing their beliefs on God’s Word and ensuring Jesus remains the chief cornerstone.

Do you remember the children’s book Where’s Waldo? That book consists of a series of detailed illustrations depicting countless people all dressed like Waldo in his signature red-and-white striped sweater and knit cap. Readers are challenged to find the real Waldo hidden among the lookalikes. But it’s not easy spotting him.

These days it’s not easy to find the real Jesus either. He can sometimes be hidden among the lookalike ideologies that represent a Christlike value—such as love or justice or stewardship—to the contemporary world. It’s possible for Christians, particularly those Christians who are rather biblically, theologically, and doctrinally illiterate, to get confused—sometimes an ideology looks so like Jesus that sincere believers can mistakenly worship it instead of the Savior.

When an ideology looks like Jesus, it may be invited into the leadership of a church, where its message grows prominent through sermons, Sunday school lessons, and missional programs. With time, as the congregation gives increasing emphasis to the ideology, Jesus is displaced by an “ism,” and the biblical significance of his death and resurrection fades into a metaphor. Eventually, as doctrine, theology, and the Bible itself are also displaced, the church begins to lean, unbalanced, precariously vulnerable to the slightest tremor in the world.

The Cross of Jesus