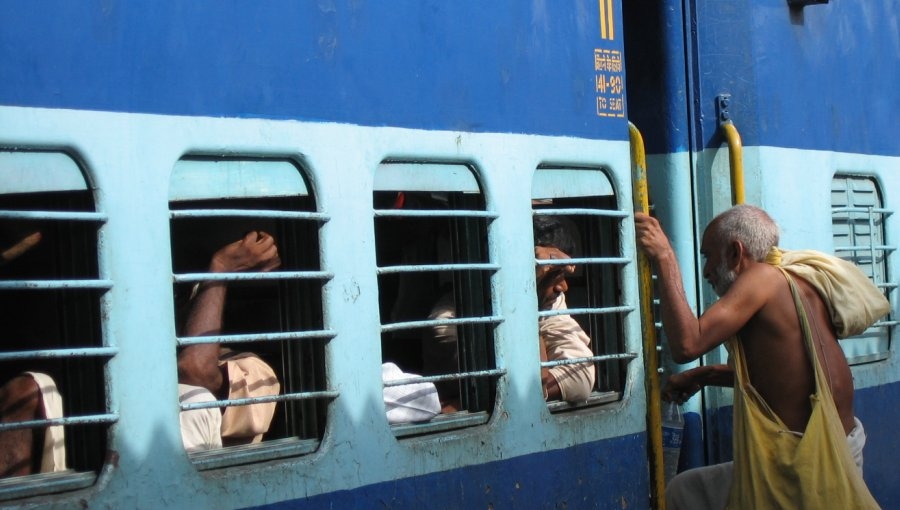 The train was taking almost twenty to thirty minutes to leave, when a man walking on his two hands and one foot, went onto the ladies’ train car.

This man is known around the train station for begging.

As he went through the train car asking for money, Eric waited for him by the exit until he finished.

When the man exited the car, Eric bent low and motioned to his mouth—making the universal signal for eating—and pointed to someone selling food, a couple of steps away. The man nodded in agreement, accepting the offer to eat.

They both went over to the stand, got the food, and then sat down next to each other on the ground.

Eric had bought him potato curry on roti. The man ate and shared some with Eric. Eric then offered this man his water bottle and they took turns, taking swigs of water.

There wasn’t any talking, just quietness and solitude in the exchange.

I watched from the exit of the ladies car—and I wasn’t the only one.

Everyone around them looked, and was intrigued. Those waiting for the train stepped closer to Eric and the man with their hands on their hips, staring at this picture.

It was as if everyone couldn't help but look at this picture of two worlds that do not belong together.

I couldn’t help but think of Jesus and his words when I saw a college student and a physically-disabled beggar sharing a meal in the middle of the train station:

“Truly I tell you, whatever you did for one of the least of these brothers and sisters of mine, you did for me.”

Reflecting on this, I thought: 'Eric had lunch with Jesus.'

It was simple. It was not glamorous. No words were even exchanged.

Yet their silence echoed throughout the whole platform.