Can You Really Be Greek and Christian? | InterVarsity
Skip to main content

Can You Really Be Greek and Christian? 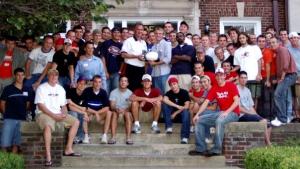 Back when I was applying to college I was a naïve pastor’s kid who decided to forgo Christian colleges for a place where it would be something of a “challenge” to be a Christian. Instead, I’d head to the secularized and faithless University of Illinois. My naivety was two-fold: first, at this point in my life I’m not certain my faith would’ve stood up to much of a challenge and secondly, the student activity fair at Illinois featured enough Christian campus ministry groups to fill a few Christian colleges. I didn’t expect to find so many Christian groups at Illinois and I most definitely didn’t believe that a fraternity would be my entry-point into one of them—but maybe I should have.

The University of Illinois is home to the largest Greek system in the country 36 sororities and 59 fraternities with over 6,800 total members making about 22% of the campus Greek. Still, despite an invite from the Lutheran fraternity (I was on the pastor’s kid recruitment list) and a few random parties—joining a fraternity was close to the last thing on my agenda when I arrived on campus.

What business did a pastor’s kid have joining a fraternity? Apparently, a lot more than I realized.

Sigma Phi Epsilon, one of the largest social fraternities in the country was founded in 1901 at the University of Richmond. It got its start when Carter Ashton Jenkens (yes, the stereotypes about preppy names may have some merit) a divinity student and son of a Baptist minister decided to form a “different kind of fraternity.” The fraternity would be founded on a notion of brotherly love, inspired by the words of Jesus in Matthew 22: "Thou shalt love the Lord thy God with all thy heart and thy neighbor as thyself"—a virtue that to this day is listed as one of the cardinal principles of the fraternity.

Halfway through my freshman year after a night of wandering around campus in a pack of freshmen, I found myself in the living room of Sigma Phi Epsilon experiencing this cardinal principle first hand. While waiting for a friend to finish a conversation with a fraternity member, I sat down on the couch to wait and watch. I had been to a few fraternity parties earlier in the year; some I now look back on with a bit of shame.

This fraternity experience though was different. It was a Thursday night. There were no parties, no half-naked women, no smell of weed wafting through the air—just a group of guys hanging out who seemed to legitimately care about each other. It was nothing other than casual conversation that I observed but it was clear there was something different. It went well beyond “different” however when Abe sat down on the couch.

Through the Bible study that Abe invited me to, I eventually became involved with Greek InterVarsity, learned how to make my faith my own and was trained in Bible study, evangelism, and practical ministry for life in the Greek system. (Oh yeah, I also met my future wife there.) When I think about the brothers that I still call my best friends today, the weeks spent on service projects together and the experience of learning how to live among and serve 60+ diverse roommates, I’m deeply thankful  for my experiences as a SigEp. And while this is increasingly clear to me now It didn’t take long after Abe’s first invite to realize that this was a group that I had been trying to find for years—I just never expected it to be in a fraternity.

Great Possibilities in the Greek System

It would be a gross misstatement to say that every fraternity situation is like the one I walked into at SigEp that night—it may not even be the case if you walked into that same house today. However, I can say that my story is not as rare as one might imagine when confronted with the rampant stereotypes and headlines to the contrary.

There are indeed a growing number of Bible studies in fraternities. According to Greek InterVarsity’s most recent estimates, there were over 320 Bible studies this past year in fraternities and sororities across the country. Just as my Bible study experience was not an isolated one, Sigma Phi Epsilon is not the only Greek letter organization with roots in Christianity.

The sorority Phi Mu was started in 1852 by three Christian women at Wesleyan College in Macon, GA, to create closer fellowship. Their creed states that they will always rever God as their maker, striving to serve Him in all things.

The fraternity Alpha Tau Omega was founded in 1865 by a young cadet at Virginia Military Institute “to bind men together in a brotherhood based upon eternal and immutable principles...to know no north, no south, no east, no west, but to know man as man.” The founders believed true reconciliation and brotherhood could only happen through Christ. Thus, the Tau in the middle of Alpha and Omega represents the cross.

InterVarsity is in the business of seeing God’s renewal become a reality on campus; the Greek system is no exception. With the foundations already laid (though often buried deep and rusted over) and fellowship already present (though sometimes lacking lasting purpose), fraternities and sororities have great potential for renewal.

I didn’t believe it was possible to be both Greek and Christian, and yet here I am years later, working for an organization that counts almost 4,000 Greek students across the country actively involved in renewing their chapters through living the Gospel and sharing it with their brothers and sisters. Four thousand is still small enough to be considered a minority, and there are still systemic problems associated with Greek life. But there are 4,000 couch conversations waiting to happen; 4,000 students inviting potential pledges to come and see what God can do when the Gospel comes alive in a Greek chapter.

Want to read more stories of God transforming life in the Greek system? Head to greek.intervarsity.org to read dozens of testimonies from fraternity and sorority members on campuses across the country.

Eric Holmer is a member of Sigma Phi Epsilon and currently serves as the Associate Director of Communications for Greek InterVarsity.

Thanks for sharing your

Thanks for sharing your story, Eric! I'm once again inspired to see Greek systems transformed.

Oh well, I never heard that

Oh well, I never heard that sororities were good. I'm a little bit afraid of this post to be sincere. Here in Puerto Rico fraternities and sor... are about drugs, pre-marriage sex initiations, "freedom" because it's your life... you know? all that sinful stuff? That king of groups scares my heart out of me. But if you guarantee that there is not liberal sex, beers, drugs, crazy girls/guys, well o.0

Why does Jesus need a

Why does Jesus need a fraternity to work through? Isn't His word enough? A secret society is a secret society. The Kingdom of God IS the true brotherhood. Let us come out of darkness and stop the mixing, merging and compromising!

I am a member of Omega Psi

I am a member of Omega Psi Phi Fraternity Inc. And I lead my first bible study last Wednesday. It is possible to be Greek and A Christian. God gave me my fraternity and I put him above all things. May God Bless You this was a good read and I wish we had a chapter here for this fraternity.