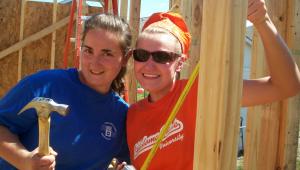 For the past six years, InterVarsity students from mostly New England campuses have been inviting their friends to join them for a week in New Orleans during spring break, where they rehabilitate hurricane-ravaged property during the day and study God’s word in the evening. This week, the fourth and final week for 2012, the group was joined by InterVarsity’s New England Regional Director Chris Nichols. Here is his report:

It's day three of our week at the Katrina Urban Relief Plunge(KRUP). One hundred twenty students and staff from Brown University, Middlebury College, the Rhode Island School of Design, and the University of California—Berkeley have all come to New Orleans to build new homes, paint houses, work on an Urban Farm, and in general serve in the still recovering poorer neighborhoods hardest hit by Katrina.

As we serve we are also exploring the spiritual motivations for service.  Nearly have of our community are still exploring Christianity and we are have dynamic and lively conversations about the nature of justice and what it means to make real  change in life and they systems that are created.  Last night we explored different kinds of justice.We started with distributive and retributive justice

Our leader, Sarah Shin asked a representative from each campus to share what kind of justice their campuses emphasized and the impact that style of justice had on us.  She then led us to think about the gospel's justice perspective which she framed as restorative justice: God in Jesus brings truth and reconciliation where there has only been injustice and pain.  Our discussion led to powerful small group discussions.

It's clear to me that the Holy Spirit is on the move among us.  Everyone is being challenged as they turn toward God.  No one gets to leave unchanged.

There is something amazing about being with such a diverse community as they come face to face with need, with God, with one another.  I'm looking forward to see how it all ends!  4 days to go.....

Photo from KRUP 2009. Reports on previous year’s KRUP experiences can be read at: