The Church Calendar: Ritual or Dance? 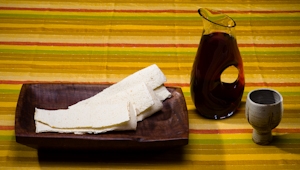 It never would have occurred to my parents to select readings for our family story time that reflected the Christian year. They were unfamiliar with it, as was I for many years. For example, in my senior year of college, my literary-minded apartment-mate proposed throwing a Twelfth Night party à la Shakespeare. Well, I knew about the play but had never connected its title with the twelve days of the holiday song, nor did I realize that January fifth was the eve of a feast called Epiphany. Once, in ignorance, I pointed out to a Catholic friend that he had some kind of smudge on his forehead he just might want to take care of. Only later, to my embarrassment, did I realize it had been Ash Wednesday. I knew almost nothing about this holy day of fasting observed by Christians around the world.

…My church paid little or no attention to the Christian year, as is still the case in so many churches. Baptists, like other Free churches arising from the Protestant Reformation, had discarded the long-standing observance of the liturgical calendar so central to the Orthodox, Catholic, Anglican and Lutheran traditions.

This unawareness was to change for me.

When I met my wife, Charlene, I was a young campus minister with InterVarsity and she a college student. Although she had grown up Catholic and I Baptist, we had both been drawn to a college-oriented Evangelical Free church. There was strong biblical teaching there, but nothing of the Christian year. After marrying, we moved to Miami where we settled together on a small Episcopal church. It was multiethnic, mildly charismatic and missions-oriented. And also liturgical.

With her Catholic upbringing, Charlene felt right at home. Not me. I was lost for months.  I’d never been in a church like this: they used a prayer book and a lectionary, they took Communion—with real wine—at an altar every week, they stood and knelt and crossed themselves, and the pastor—priest, actually—wore colors that coordinated with seasons of some sort. I had no idea what was going on….I had concerns about empty rituals, rote prayers and outdated traditions. Didn’t it all add up to religion rather than relationship, formality rather than faith, aesthetics rather than authenticity?

But I stuck it out, and two choices proved important. First, I determined to learn more by asking questions and reading. About the history of the Episcopal church and the Anglican tradition. About the shape and meaning of the services. About the nature of sacraments and the reasons for ritual. About the holy days and church calendar. Second, I decided to participate with an open heart. I chose to trust that there was something valuable in all of it. I prayed for God to guide me and guard me. I tried to be patient.

Slowly, over time, I began to experience the beauty and power of the liturgy.

I remember the moment when I knew I had truly absorbed this form of worship. I was attending an InterVarsity staff conference. At that time there was little knowledge or appreciation of liturgy in our evangelical ranks. Our guest Bible expositor was a local Episcopal priest, and in our closing meeting he led us in a simple celebration of the Eucharist using the Episcopal liturgy.

As I heard and recited the now familiar words of worship in that very different setting, I was flooded unexpectedly with joy and gratitude. Maybe I was surprised that the liturgy “worked” in an InterVarsity context. I’m not sure. But suddenly I felt united to all the Christians throughout the world who would be saying the same pattern of words in worship that week and to all who had said them over the centuries of the church. A pattern of words that, I now realized, inhabited me and drew me close to God. I was experiencing what C. S. Lewis wrote in explaining liturgical worship:

"Every service is a structure of acts and words through which we receive a sacrament, or repent, or supplicate, or adore. And it enables us to do these things best—if you like, it “works” best—when, through familiarity, we don’t have to think about it. As long as you notice, and have to count, the steps, you are not yet dancing but only learning to dance."

I had learned the steps and now I was freely dancing with my eyes on Jesus.

This dramatically misses the

This dramatically misses the point of the Liturgy, which is this: in Exodus God gave the Hebrew people a Liturgy that was a shadow and image of the worship in heaven. According to Hebrews, He has given Christ the "Liturgy" of the Heavenly sanctuary, which he enters in with the offering of Himself - and calls us to worship with the very life of the All-Holy Trinity. Style has nothing to do with it - to be absent the Eucharistic Liturgy is to be cut off from the Godhead.