Cross-Cultural Interactions in My Everyday Life 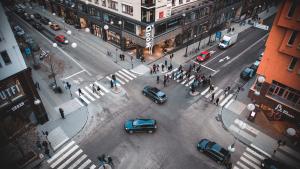 I accidentally bought an expensive leather jacket three weeks after moving to Paris. I could understand if you would think this was because of a language barrier, but I was fluent by the time I moved abroad. No, my friends, this wasn’t about language--this was about crossing cultures.

On my way back to my temporary apartment, groggy from looking for a place to live, I passed a store window with a leather jacket I liked. I decided to go in, see how much it cost, and maybe try it on. Shocked by the price tag, I knew it was out of my budget. But the owner of the store saw me fiddling with the tag and, because I’d brought my Midwestern niceness to France, I acquiesced when she held it out for me to insert my arms in the holes. It was too small, and I was relieved.

Alas, my Wisconsin roots and exhaustion didn’t help me put up a fight when the owner said she could have it in my size as soon as the next day. I assume my mild protest came off more as politesse to her, because she was soon on the phone with a sister store to have it sent over.

Then, the coup de grâce: she asked for my credit card. I thought this was odd, but perhaps it was just how it was when you put something on hold in France. Still, I clarified, if I decided I didn’t want the jacket tomorrow, I would get back what I’d assumed was a down payment. She confirmed.

24 hours later, I was back in the shop with a different clerk handing me the phone where her boss, who’d been so sweet the day before, was screaming. I’d tried on the new jacket and it was still too snug in the elbows, so I didn’t want it. When I told the clerk, she looked shocked and said I had to take it. She pointed at a tattered and semi-hidden piece of paper below the register that said in chicken-scratch French, “No returns. No refunds.”

To make a long and heated phone conversation short, I endured some shrieking from the owner, pleaded my case, and ended up with store credit, which I’ve never used in the three years since because I can only use it on Tuesdays when the clerk who hand wrote it on a torn corner of notebook paper is on duty. Guess who is never there every Tuesday I’ve made the trek back?

This experience has thankfully been the worst (and most expensive) cross-cultural misunderstanding I’ve had to date in France. While I may have handled this Parisian encounter with cross-cultural aplomb, it was back on American soil--my cultural home turf--where I biffed it.

While back in Wisconsin visiting family, I went to the mall to stock up on jeans designed for midwestern thighs as opposed to those of petite chain-smoking parisiennes. Upon entering a store, I was sidelined: “Hi, I’m Kim! We’re having a buy-one-get-one-free sale today. Are you looking for anything in particular? What’s your name?”

In France, you rarely exchange first names with your neighbors, let alone store clerks. At first, I lamented the lack of sociable employees, but now that I swim daily in French cultural water, this warm greeting back in my hometown felt flaming hot.

Once locked in a stall, I texted my cousin: “I’ve just escaped the clutches of an über-friendly mall employee. I’m taking refuge in a dressing room. Have American store clerks always tried to be your bestie after half a second?”

I’ll give myself some credit for not saying anything mean to the clerk’s face, but I’ve got to admit my heart was in a judgy place in that moment. I’m less Midwestern-nice after battling the grit of not-for-tourists Paris for this long. Every time she knocked to check on me, I wanted to tell her to back off, I’d let her know if I needed her help, merci beaucoup. Instead, I gritted out a “No, thank you” and texted, “She just checked on me a third time!”

If I ever move back to the US, stores won’t be the only place I’ll struggle with routine cross-cultural encounters. And, it’s not just because I’d be enduring reverse culture shock for a long while.

We all interact cross-culturally on a regular basis. You might be dating someone of a different ethnicity. Or you work with someone who’s a generation or two older than you. For crying out loud, even trying to communicate across genders is a cross-cultural endeavor.

I once combined all three: I dated a Gen-X, Mexican-American male for four years. We had different views on family, education, work, and money. In my pride, I often saw his perspective as wrong. But when performing an autopsy on our relationship, I realized if I’d been aware and respectful of the cultural dynamics at play, we might have been able to make it work.

In InterVarsity lingo, making it work cross-culturally means “staying on the green line,” a phrase based on our Approaching Differences diagram. Although the diagram is primarily to prepare you to step into a different country’s culture, it’s equally applicable to daily life on American soil.

Whether with store clerks, significant others, or another demographic, there are three additional lessons I’ve learned to get back on the green line:

In a few of my cross-cultural mishaps, I’ve been fortunate enough to have the chance to apologize. Sometimes the misunderstanding is a hit-and-run encounter, but when it’s not, I try to acknowledge and apologize for my role in any miscommunication or hurt feelings. As someone who hates to show an ounce of imperfection, it’s very humbling to do so, but it paves the way for better interactions.

Likewise, I’ve recently added thanking the other person for the life lesson. I went with two houseguests to help them get into a museum after they’d forgotten their e-tickets, and was surprised to find myself in a clash with a security guard. Once my guests were all set inside, I came out and thanked him. My feelings and ego still stung from our confrontation, but he had, as I told him, been patient enough to talk through both sides of our miscommunication. I promised him I’d learned from the experience.

And that’s my final encouragement: Use both positive and negative interactions in the future. Rather than painting broad strokes across all French store owners, or American mall employees, or exes, or security guards, cross-cultural interactions are insight for how to behave and react in the future. Sure, there will be some losses to accept along the way, but there’s more to be gained as we keep learning, on one side of an ocean or the other.

By Jessica Fick
Crossing Cultures at the Table

Crossing cultures doesn’t simply happen when you board a plane or go overseas.

By Lisa Liou
The Goodness of Failure in Racial Reconciliation

Have you ever attempted something that would certainly result in failure?

By Brenda Jo Wong
The Painful Gift of Cultural Displacement

Sometimes God displaces us and sometimes we choose displacement to survive, thrive, or walk in obedience to God. However we end up being displaced, whether through persecution, a natural disaster, or by choice, such as taking a specific job, God uses displacement to shape us and draw us closer to him.