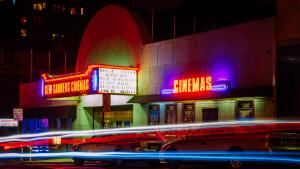 With so many of us stuck at home right now, TVs and screens feel a bit like black holes, sucking in hours of our free time. The Apostle Paul’s words, “I will not be mastered by anything,” seem like a very timely reminder (1 Cor 6:12). That said, movie watching can help us rest and relax—in moderation.

The thing I love about movies is that they’re an invitation into the unexpected. We want to see how the jumbled bits of the story we do know, through the title and trailers, fit together in ways we didn’t anticipate.

For me, what’s often most unexpected—and rewarding—is that moment when I’m just passively watching a movie when BOOM! God enters the picture. What’s so fascinating is that the movie’s director and producers may never have intended to make that connection. But God steps in, “stealing the show,” to use this piece of culture to point me back to him and his truths.

Here are a few spoiler-included examples of what I mean, taken from my “eclectic” aka random list of interesting movies from over the years.

Meet Robert Neville, the last human in New York City. Surrounded by a horde of sunlight-hating zombies itching to off him. Don’t hold your breath on seeing this story on a Sunday School flannelgraph.

It’s intense, a raw portrayal of Neville processing catastrophic tragedy. Most of the film documents his quiet struggle, the coping mechanisms he develops to stay sane. But it all boils over when he meets a young woman, Anna, who tells him there are other survivors, saying, “If we listen, we can hear God’s plan.”

Neville responds, quietly at first, but then exploding, “Every single person that you or I have ever known is dead! Dead! There is no God!”

Thankfully, that’s not the end of the movie. In the last few minutes, Neville discovers a cure for the zombies and prepares to lay down his life. When Anna asks him why, he answers, “I think this is why you’re here . . . I’m listening.”

Self-sacrifice, an allusion to listening to God’s voice, and a sense of the Lord’s ultimate plan—I appreciate how subtly the film portrays Neville’s epiphany. For certain stories and people, an open confession of Jesus as Lord may have been fitting here, I understand. But for many walking into the theater, expecting just another post-apocalyptic story, this subtlety may be more effective in generating curiosity and follow-up conversations about their own beliefs about God.

“I will not fail to speak of Leviathan’s limbs, its strength and its graceful form” (Job 41:12). While Kong certainly isn’t a flesh-and-blood Leviathan, this 100-foot-tall CGI monster does capture a bit of the awe we might feel if we could see the biblical Leviathan. And throughout the movie, we watch different groups of characters uniquely relate to Kong, ultimately mirroring the different ways humanity has reacted to God’s power on display through creation.

The inhabitants of Skull Island believe Kong is their god and protector, worshiping the created instead of the Creator—something humans have done since the beginning of time. Though the film’s core group of scientists and soldiers never get to full-blown worship, they develop a healthy fear for Kong after a few encounters with him. I can see a number of parallels between them and the modern world’s attitude toward creation. We’re impressed by it, awed, scared even, but not enough to make us fundamentally change who we are or how we act.

Then there’s Lieutenant Colonel Preston Packard. In his Ahab-esque obsession with destroying Kong, Packard exemplifies what happens when God’s command to humanity to “fill the earth and subdue it” is twisted from a stance of stewardship and preservation to one of dominion and destruction (Gen 1:28). Packard has to kill Kong. He has to dominate him and prove that humanity is still the top dog/creature/monster.

Sameness—humanity’s ultimate solution to the problem of evil. Make everybody the same, and hatred and war will just fizzle out, right?

Watching the film’s opening scenes, you do get the sense that maybe this actually could work. There’s no fighting, no poverty, no arguments.

But something’s missing. People go about life in their “family units” with a hollow look in their eyes. And later, we discover that tensions still exist. They’re just hidden. Anyone who fails to conform to Sameness, along with the elderly, are “released to Elsewhere,” a euphemistic cover-up for euthanasia.

This film shows us what happens when we try fixing things on our own without God. We try to hide our sin and brokenness, allowing ourselves to be fooled into believing that everything’s fine.

We get a bland, literally colorless life. And just like the vibrant memories of the past that Jonas receives from the Giver—moments of celebration, love, family, life—we miss out on all that God intended for us. We miss the satisfaction of pursuing him through our callings. We miss tasting and seeing God’s new mercies each day. We miss each culture’s divine beauty and the harmony when our differences are reconciled in Christ.

Now that you’ve seen examples of God’s presence in the unexpected, I encourage you: be on the lookout for him anywhere and everywhere. Where in your studies, job, passions, culture, or church is he already at work? How can you learn and grow, tasting and seeing his goodness in a new, unexpected way?

Avengers: Endgame struck a chord in people across the world. And like other art forms, it provides an inside look into today’s Western culture, especially when we consider the movie from a Christian perspective.