Discovering God in the Middle of a Career Nightmare 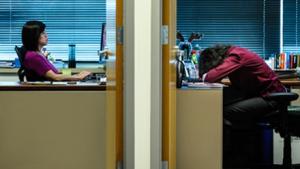 The more people I talk to, the more it seems like everybody has had at least one summer job they’ll never forget no matter how much they may want to.

Mine was counting worms for a bait shop. (Yours probably doesn’t sound so bad now, right? Ha, ha, ha.)

Imagine being covered in dirt from the second you step in the door till even after you shower at night. Spending eight hours with tubs and tubs overflowing with cold, slimy, writhing worms. Stepping into the bathroom to have a box full of wax worms staring you in the face. Dealing with the smell of dead worms all day long in the heat of late July. Closing your eyes only to see images of worms oozing all over. Even dreaming about worms!

Somehow I managed to make it through that job, but every day was a struggle. One of the biggest reasons I kept coming back to work was that I only had to do it for a couple more weeks. It wasn’t like I had to do it for the rest of my life. Soon enough I would be heading back to college to become an English teacher. Then I could put this whole job nightmare thing behind me.

Fast-forward a couple years later into my second full year of teaching. I found myself walking into an empty classroom after an intense one-on-one meeting with my principal that left me feeling like I was about to get fired.

I sank down into a chair and just stared off into space. What was going on?

I thought about all the struggles I’d had that school year. The numerous times I’d felt ridiculously unprepared. The handful of kids who legitimately consulted each other about the antics they would pull in my class. The overwhelming number who couldn’t care less about anything that came out of my mouth. The constant disrespect. The number of times I just collapsed at the end of the day, exhausted by all the stress and drama. Worst of all, the way these kids seemed to think that I hated them.

This wasn’t part of the plan.

I’d chosen to be a teacher because I wanted to serve, wanted to help, wanted to teach, wanted to be a light for God in public school. I’d spent four-and-a-half years of my life learning how to do this job and received multiple confirmations that this was my calling. Add to that two years of teaching experience and all the countless hours of planning and grading, coming in early and staying late.

And now it was falling apart right in front of me. I felt like I was right back in that bait shop, just trying to survive and get through each day. But this wasn’t something that would just go away after a few months. This was what I was supposed to do for the next 40 years. This was a part of me, I thought.

I was upset with God, and wrestled with him. It felt like the last six years of my life were rapidly becoming a colossal waste of time and that he’d brought me all this way to a dead end.

Refuge in the Struggle

I’d love to say that after the talk with my principal, everything magically improved. I tried being tougher, more disciplined, more focused. But things just got worse. I found myself dreading school more and more. The kids seemed to notice and stepped up their shenanigans. One thing after another kept drilling into my heart that I just couldn’t handle this job anymore. And honestly, I didn’t want to.

One morning I literally felt like I couldn’t take another second; the anxiety was tying my stomach into knots. I sent another teacher from my church a text before school started that day: “Every morning I get so anxious and scared. I just don’t feel like I can come back to this place next year. But as I was praying/trying to listen to God this morning, he brought to mind this verse. ‘You will keep in perfect peace him whose mind is steadfast because he trusts in you’ (Isaiah 26:3).”

I found myself repeating that verse in my head. With all my heart, I latched onto those words. I needed them to be true. I desperately craved God’s peace even as it seemed like all my plans were tumbling apart.

During that time, God used my anxiety and worry to breathe a deeper, richer life into his Word than I have ever known before.

He also made it clear that I had a very simple choice to make. I could feed my anxiety by concentrating on all my problems and faults and everything that is wrong in my life. The other option would be deliberately choosing to rest in him and allowing his peace to overshadow me. This was not a one-time decision. It was and still is a daily, moment-by-moment challenge. At the most random of times, I felt my worry about the future creeping back, and I had to choose to take refuge in God once again.

Since then, circumstances have definitely improved. I found a job I enjoy (thank God and thank you, InterVarsity!) with a lot less stress and much more encouragement. But there are still those days and those moments where things just aren’t going right and I get frustrated.

When that happens, God reminds me of the choice I have to make. Where am I going to look? Am I going to trust or doubt him? Too often, I allow myself to doubt and wind up just getting even more stressed out. But when I trust him, my problems seem to shrink and God’s goodness grows. The good days are even better because I recognize them as a gift from him, and the bad days become more bearable because I know God is still in charge and is taking care of me.

So whether your life is going smoothly and all according to plan or it seems like you’re living a nightmare, you have that daily choice too. Even if it doesn’t seem like an active choice to you, you’re unconsciously focusing on something or someone. So the choice remains: will you doubt God or trust him?

Hey Nathan, Thanks for

Hey Nathan, Thanks for writing this article.. I totally feel the same way at work recently.. This made me feel good and is a good reminder to always trust in God. Thank you.

This testimony was very

This testimony was very encouraging. I am currently out of work for 6 months and it feels hopeless. There are a lot of times where I think God is punishing me or He just Isn't listening to me because I have done something wrong. I know that doubt breeds fear and anxiety so I'm also struggling with both. I just need to remember that God is faithful and He will answer me. This helps me remember that I serve a God that can will take of me. God is bigger than all my problems. Thanks for the reaffirmation.

God always reaches out to us

God always reaches out to us in the most unforeseen ways. I am thankful for this story! I attended Intervarsity all throughout college and was a leader for 3 of those years, I even considered staff. I ended up going into teaching and honostly have skipped over the intervarsity emails for the past two years. I am in my third year of teaching and each year has been such a struggle. Something drew me to open today's email, I had no idea what I was going to read, but this was a message I needed to hear today. Thank you!

Thanks, Nathan! I certainly

Thanks, Nathan! I certainly relate to your article, and am sure many others do too. You're right; where will we focus, and what are we trusting in there in the middle of the anxiety and stress. Tough lessons, but they build the Body of Christ into His image... and we're glad that included moving you into InterVarsity. :)

Well written and much needed

Well written and much needed for myself. Thank you kind sir

Thank you for sharing your story. I am also a teacher and can totally relate to how you felt. The verse you shared is a great source of encouragement. Thank you again

Few things in life are as frustrating as a terrible job.

By Sabrina Chan
Wisdom for Graduates: Look, God Is with You!

Congratulations on finishing college! I’m excited about the adventure that lies ahead for you. Many things will be changing, of course, but here’s what I want to remind you of: God is with you in the transition.

By Kathryn Brill
Fake Heart Attacks and Real Hope: My Journey with Anxiety

If we ourselves haven’t experienced a mental illness, most of us know someone who has.