False Guilt or the Holy Spirit? Learning to Discern 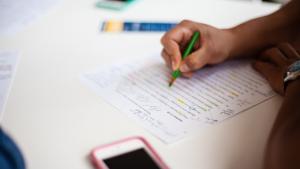 My Bible study leader, Gia, could tell that I was about to lose it. By “the spot,” I instantly knew what she meant. As luck would have it, our dorm hall had a cleaning supply closet that was hardly ever locked. It mostly held brooms and toilet paper but also had an alter ego as our favorite quiet place to go to talk or pray. When you live in a triple, you take any privacy you can get.

In answer to her question, all I could do was nod and head toward the comforting stacks of TP. The door had barely closed before I couldn’t hold it in any longer and I broke down weeping.

Earlier that year, some of my dorm mates and I had protested the fact that our dorm didn’t have its own Bible study. We wanted to help get one started and committed to be part of the team that would pray and reach out to freshmen to make that happen. But once it came time to actually do what we said we would do to help get a study started, my friends and I who had been so eager and enthusiastic just a few months earlier got caught up in our own schedules and had not done much of what we said we’d do.

Earlier that day, Gia had gathered us to ask us what had happened. But my tears weren’t because she was harsh or angry or accusing. Instead, I felt something that I hadn’t experienced in my brief one year of following Jesus.

And it felt different than anything I had experienced before.

I knew I needed to change my actions. But it wasn’t due to anxiety. Or fear. Or shame. Those motivators were much more familiar to me.

Instead, the Holy Spirit gave me a sense that I needed to act differently and follow through on caring for the people that I said I would. Doing nothing was no longer okay. That day, I experienced the same Jesus we read about in John 8 who asks a woman caught in a public, embarrassing moment in her life, “Where are your accusers? Didn’t even one of them condemn you?” When she says no, he simply replies, “Neither do I. Go and sin no more” (John 8:10-11).

Jesus’ gentle questions help her realize that not only does he shield her from the condemnation of others, he also doesn’t condemn her. As the only rightful judge, he tells her to live differently, but he does not heap shame on her.

This passage doesn’t give us too much information about what the woman is feeling. For me in my meeting, it was painful for sure. But I’ll never forget that day because God taught me how to discern between Holy Spirit conviction that leads to freedom and false guilt that leads to crippling shame.

False guilt is paralyzing. When I am caught in false guilt, I see myself (my shortcomings) and people (their judgments) but I don’t see God very clearly. False guilt usually draws my focus toward a deep fear of what other people think about me. I see the stones, both real and imaginary, that others might cast toward me. Like the woman in John 8, it isn’t until I hear Jesus’ words to me that I experience the freedom to know that I am both loved and accepted as I am and also called to do better. Like her, I need to know that Jesus doesn’t condemn but he also invites me to be transformed. Unlike the paralysis of false guilt, true conviction sees a way forward. It gives me a step to take even if that step is scary.

In the short run, this God moment in the supply closet changed the trajectory of my year. I met and became friends with some people who I still know today and who inspire me with their lives of faith. I also learned how to be less controlled by my fears of what people might think of me, how to have joy that comes from hearing from God and acting out of conviction, and how to be a person of hope. I am grateful that my year didn’t end the way it started.

Last year, I was reminded of this when I was given the chance to preach at my church—something that I had only been asked to do once in my 20 years of membership. As I sat with the passage that I was assigned, I felt like I wanted to address the role of believers to speak up in the face of current headlines, particularly related to police shootings of Black men. I felt nervous that my predominantly Asian American church would not know how to respond to that word. It was also tempting to feel paralyzed by the historic lack of action by churches to speak up. But God was gracious, and instead of feeling paralyzed by false guilt, I felt like God gave me the ability to teach and preach on something that felt timely and important. And even more so by God’s grace, many people said that they felt challenged yet not condemned—an encouraging sign that the Jesus of John 8 was alive and well in my beloved community.

Maybe there’s an area of your life where, like me, you’ve settled for doing nothing when God has been calling you to act. What would it look like to step up? No condemnation. No shame. Just pure joy.

Tracey Gee is an InterVarsity staff working in Southern California. She is also an author and editor of More Than Serving Tea: Asian American Women on Expectations, Relationships, Leadership, and Faith.

By Jonathan Rice
Who Is the Holy Spirit?

When describing God, the language of the Bible is not merely truthful but careful.