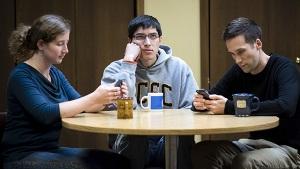 Are you tired of crappy, superficial, purely electronic friendships?

In my last post, we explored three practices for developing deeper friendships. Here are two more practices that can help your friendships go to yet another level of depth.

4. Call out the elephants in the room.

Maybe you have friendships where you regularly spend time together—going to movies and restaurants, and even having fun from time to time. But something about it feels superficial, mundane, shallow.

Best-selling author and psychiatrist M. Scott Peck, in his book The Different Drum: Community and Making Peace, described this dynamic as “Pseudo Community.” It’s where most communities start—and often where they stay.

In Pseudo Community, we are nice, polite, and tolerant of one another, but we avoid conflict, honesty, vulnerability, or challenge at all costs. Over time, as Pseudo Community becomes our norm, it leaves us with that nagging feeling of inauthenticity and superficiality.

Jesus had a penchant for breaking down Pseudo Community. When there was drama among his friends, he didn’t avoid it or gloss over it. He called out the elephants in the room. Even when his friends were joyful, Jesus was not afraid to challenge them if he thought they were missing something.

I was caught in the middle. I knew this dynamic was going on, but I clung to Pseudo Community like a drowning man to a buoy. I told lots of jokes to break tension. I changed topics or avoided conversations when the issue came up. I ran from the conflict. And for the entire first half of the trip, our mission trip appeared to be going smoothly, though we all knew that there was a big problem. I had successfully managed to keep Pseudo Community going strong even with a raging undercurrent of tension and conflict.

Eventually one of the program staff confronted me about my conflict avoidance. We both agreed that the issues needed to be named and went on to have a conversation with my team and the program staff.

After some painful exchanges and intense conversations, God slowly took our community to a deeper level. Apologies and forgiveness were exchanged and a new level of honesty and depth developed among us all. My students became more teachable and the program staff became more understanding. I learned a hard but incredibly necessary lesson about how my conflict avoidance hinders deep community. Years later, I am still thankful for how God worked in that process.

We often settle for superficial friendships and Pseudo Community because going deeper is a scary place. When we call out areas of tension, we have to deal with conflict, be honest with others, and give and receive challenge. It’s certainly much safer to stay in Pseudo Community. But I think we all know deep down that it’s not better.

5. Get help with interpersonal blind spots.

The most frequent derailers of deep friendships are interpersonal blind spots. We all have them but often can’t see them in ourselves (hence blind spots). We can, however, easily spot them in others.

Think about a friend or acquaintance who has a particularly annoying habit that everyone knows about except the person themselves.

In high school, I had a friend with incredibly bad body odor. You could literally smell him around the corner. And he had no idea. But none of his “friends” (myself included) had the courage or honesty to tell him straight up (this is textbook Pseudo Community, by the way).

My interpersonal blind spots weren’t as egregious as heinous body odor, but they were just as derailing and just as imperceptible to me. I have this nagging tendency at large gatherings, parties, and other social functions to dominate conversations. I’d make way too many jokes and then I’d interrupt people with my “funny” stories (often I was the only one who found them funny).

People even gave me the nickname “Senator” because I could sometimes act like a smarmy politician, desperately trying to get people to like me. I always knew I was a gregarious, extroverted guy, but I had no idea I was coming across that way and to that extent.

Thankfully, I had a few close friends who firmly and lovingly called me out on my interpersonal blind spot. They pointed out how I was alienating and annoying people and taking up way too much social space. I’m still working on it, but without friends who were willing to bring it up to me, I don’t know where I’d be today.

We don’t have to settle for mediocre, superficial friendships. We were created for more. But pursuing deeper friendships won’t be easy. It will take time and effort. There will be risks involved. It may not turn out exactly the way we hoped. But we have a marvelous example in Jesus Christ. And we have a God who empowers us and walks with us every step of the way.

You might also find these resources helpful in developing deeper friendships:

Blog Categories:
Your Place in the Church
The Post-College Transition
Relationships