Giving Up My Girlfriend | InterVarsity
Skip to main content

Giving Up My Girlfriend 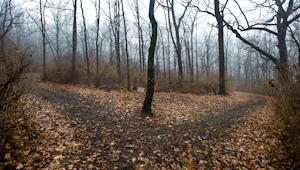 As we go deeper in following Jesus, we all at some point enter into a heart-wrenching wrestling match with God in which we repeatedly ask whether he’s truly out for our best interest. When we’re called to give up something or someone that means a lot to us, this question can be seriously distressing.

Toward the end of my junior year of college, as I was applying to be a leader with InterVarsity during the upcoming school year, the staff workers affirmed that they would love to have me serve as an upperclassman small group leader. But they saw a roadblock in that path to leadership. I was in a romantic relationship at the time which they felt was a stumbling block for me and could be the same for those I'd be leading.

Why was my girlfriend such a big deal? How was that relationship connected to serving in ministry?

When we started dating, my girlfriend had told me that she considered herself a Christian. But as the relationship went on, I didn’t see any fruit of that. The truth was that she merely believed God exists, with no mention of the gospel or trust in Jesus Christ.

Her misstated belief had repercussions in several areas of our relationship. Our lifestyle and values were dramatically different. She was a heavy drinker, for example. And we regularly fell into sexual sin. In addition, getting her to pray for me or come to church with me took a lot of effort.

I agreed with the staff that the relationship was a hindrance that was pulling me away from my commitment to follow Christ, but I didn’t think it was a sin to date a non-Christian. Why would God want me to end the relationship? I wondered.

Still, I knew that that was exactly was God was calling me to do—to lay down this relationship for the sake of ministry, for the sake of the gospel, for the sake of my relationship with and commitment to Christ. And I began to see that either my girlfriend was going to be the center of my life and God would be on the outside, or God was going to be the center of my life and she would be on the outside—meaning we’d no longer be dating. In essence, God was telling me through the loving, hard truth spoken to me by the staff that if I didn’t break off the relationship, I’d be missing out on much of what he wanted to do with my life.

Any relationship is hard to let go of, of course, but this one was particularly hard. I was unsure whether the hurt from losing a relationship that meant so much to me would be worth the obedience that God was calling me into. At the point of decision, I had no idea what was in store for me if I said yes to God. But I decided to trust Jesus’ words in Matthew 16:

Whoever wants to be my disciple must deny themselves and take up their cross and follow me. For whoever wants to save their life will lose it, but whoever loses their life for me will find it. What good will it be for someone to gain the whole world, yet forfeit their soul? Or what can anyone give in exchange for their soul? For the Son of Man is going to come in His Father’s glory with His angels, and then He will reward each person according to what they have done. (vv. 24-27)

I ended the relationship and became a small group leader as a senior. And God did not disappoint.

My senior year of college became the most fruitful year of ministry that I have ever had. The small group I helped lead was specifically for upperclassmen who were science or engineering majors. My coleaders and I were hoping our group would be a vibrant witness to the scientific community on campus by demonstrating that people can be faithful to the Gospel and serious about the study of science.

Coleading this small group brought me tremendous joy. I had the privilege of hearing each member’s story, walking with them through their struggles, and caring for them in practical ways. In addition, I got to be used by God to model the acceptance of new Christians into our group as well as facilitate the growth of established Christians in our community.

The small group became so much more than a Bible study. We partnered in inviting friends to Q&A sessions about Christianity. We pressed into prayer for each other and for our campus, often taking prayer walks at night. We broke bread together in our homes, sharing warm meals and enjoying close fellowship over games and activities. We pored over Scripture every week with vigor and enthusiasm. (Science majors bring great insight into inductive study!)

Just like it was for Jesus, ministry became a joyful blessing unlike anything I had experienced before.

Choosing to forsake my dating relationship to embrace small group ministry also allowed me to experience the joy of partnership and friendship. My two coleaders became two of my dearest friends. (It was a joy to partner with two other INFJs!) Our shared vision and practice of ministry gave us great synergy, which in turn was used by the Holy Spirit to help many in our campus fellowship to grow spiritually and many non-believers to come to faith. Inspired by my coleaders’ sacrifice and selflessness in following Jesus, I learned much from them about what it means to show grace and to stand firm in your faith.

In addition to friendship with my coleaders, I benefitted from the regular, close-knit community that formed between all the upperclassmen small group leaders. Under the guidance of the staff, we all prepared meticulously for our weekly studies, encouraged each other through hard times, and challenged each other to love our small group radically and lead faithfully. Many of these leaders have become my accountability partners and intercessory prayer warriors.

My view of dating is different now as well. Even though I am still currently young and single, the dating relationships that I’ve had since choosing small group leadership have demonstrated to me the greater joy of being with someone who loves Jesus just as much as me (if not more!) and desires to live out the gospel story. There’s nothing more attractive and beautiful than someone whose heart is set on the Lord.

Joy of Intimacy with God

Without surrendering my relationship with my girlfriend, I also would not have known the intimacy of a more important relationship: one with the living God. I chose to believe that God had my best interests in mind, and he did not hold back from revealing more of himself. As I depended on him to meet my deepest needs, God demonstrated how he truly is enough. I know in a new way the truth of Oswald Chambers’s words when he said:

Obey God in the thing he shows you, and instantly the next thing is opened up. God will never reveal more truth about himself until you have obeyed what you know already. . . . This . . . brings out the delight of real friendship with God.

How is God calling you to sacrificial obedience right now? A blessing of joy may be just around the corner; all you have to do is trust him and take the step.

Keith Sun is a soon-to-be medical student at the West Virginia School of Osteopathic Medicine. He calls the San Francisco Bay area his home and is an InterVarsity alumnus from the University of California, Davis.

There Is Another Way to Live