The Goodness of Creation | InterVarsity
Skip to main content

The Goodness of Creation 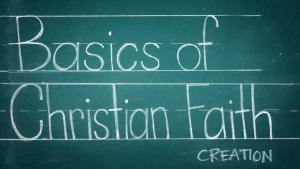 When natural disasters happen, such as earthquakes, hurricanes, or tornados, our world seems a hostile place.

Since the Bible teaches that the earth was no accident but the creation of a personal and intelligent God, such natural disasters can cause us to ask: Was this world really created good?

Is This World Real?

Some ancient philosophies consider our material world an illusion. Plato believed that the particulars of this world—the things we experience through our senses—are merely shadows of universal realities. And Hinduism teaches that we must escape the illusions of our unreal physical existence to attain Enlightenment.

In contrast to cosmologies that speak skeptically about this world, the biblical record reveals that God created the heavens and the earth as distinct, real things. In Genesis 1:11, we read: “Then God said, ‘Let the land produce vegetation: seed-bearing plants and trees on the land that bear fruit with seed in it, according to their various kinds.’” The Scriptures assume that what God created actually exists. Our world is neither a shadow nor an illusion. Instead, the natural world is real, despite our sometimes inaccurate interpretations of its phenomena.

But Is This World Good?

Even if we believe that this world is real, we are still left with the question of whether or not it is essentially good.

The Scriptures assume that this world is intrinsically good. Why is it good? Basically for two reasons: (1) God’s character is good (the Bible assumes everything God creates is good because God himself is good [Psalm 136:1]), and (2) God declared creation good (the Bible assumes God tells the truth about what he has created, and he has declared his creation good [Genesis 1:31]).

Yet This World Is Also Fallen

But something is now wrong with this world. It is still basically good, but it is fallen, tainted, cursed because of the original disobedience of humans. Since that disobedience, all humans lack the moral innocence, spiritual aliveness, and loving relationship with God that Adam and Eve once enjoyed in Eden. As a consequence of their sin, we have human spirits in need of new life, and the natural world is in need of deliverance. As Paul’s letter to the Roman church makes clear, today all creation groans as it awaits deliverance from the results of sin:

The earnest expectation of the creation eagerly waits for the revealing of the sons of God. For the creation was subjected to futility, not willingly, but because of Him who subjected it in hope; because the creation itself also will be delivered from the bondage of corruption into the glorious liberty of the children of God. For we know that the whole creation groans and labors with birth pangs together until now. Not only that, but we also who have the firstfruits of the Spirit, even we ourselves groan within ourselves, eagerly waiting for the adoption, the redemption of our body. (Romans 8:19-23 NKJV)

Though we, too, groan and labor, God calls us to hope. The following biblical text is one of the most hopeful in the New Testament. The passage reads: “Repent therefore and be converted, that your sins may be blotted out, so that times of refreshing may come from the presence of the Lord, and that He may send Jesus Christ, who was preached to you before, whom heaven must receive until the times of restoration of all things” (Acts 3:19-21a NKJV). God promises the restoration of all things good.

Living in the Meantime

Our brief lives, our present time on this imperfect earth, seem suspended like a tightrope between past and future. Our living in the meantime, before the restoration of all things, can cause us to wonder: How should we live?

In Romans we are not only told to live thankfully before our Creator, but we are also warned that our not living with gratitude toward God results in a terrible series of downward steps into degradation (see Romans 1:21).

This world was created good. It may be fallen, but it is not an illusion or basically evil. Creation is still essentially good. And for this goodness, a gift from God, we can be thankful.

By Willie Krischke
A Native Perspective on Earth Day

The last thing I want to do is perpetuate a stereotype. Every now and then I meet someone who still thinks Native Americans have a “special connection” with the earth—that they can talk to animals or put their ear to the ground and hear a herd of buffalo coming from ten miles away.