The Gospel of Christmas | InterVarsity
Skip to main content

The Gospel of Christmas 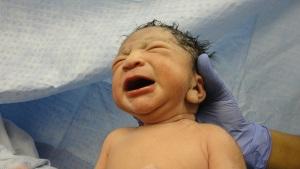 If I, a woman, were to write the gospel of the entry of God into the world as one of us, I’m pretty sure I would not start with his human genealogy, as Matthew does. Or with Isaiah’s prophecy about the coming of a messenger to “prepare the way for the Lord,” as Mark does (Mark 1:3). Or with Luke’s orderly account of that messenger’s birth. And certainly not with John’s spacy rendering of the Godman as the Word. No. I would start the account of God’s birth the way any woman who has had a child would begin such a story—with the birth itself.

If I were Mary, say—who would certainly have had a unique and relevant experience of Jesus’ life—I would begin my gospel with the gestation, perhaps providing details about my morning sickness and what I ate throughout my pregnancy and how much weight I gained. I would certainly mention that first astonishing movement of the Godfetus within me—so much like the bumping of a boat against an invisible mooring deep inside of me—and how the child the angel had spoken of became real to me at that moment.

But I would focus, as we women do, on the birth itself: on the contractions of my uterus to expel the child, on my pains, on the number of centimeters my cervix had dilated at each stage of the birth process, on the reports of the child’s progress through the birth canal by whoever was in attendance and the eventual crowning of the baby’s bluish scalp between my legs, on the blessed moment when the Godbaby left my body and, covered with my blood, took up a separate existence.

The actual birth of God in human form is a big event, full of irony and mystery and strange familiarity. It is bigger, to my mind, than every subsequent story of Jesus’ life on earth, bigger even than the story of his death and resurrection, which could not have happened without the pain-wrought passage of the divine baby through an ordinary human cervix and vagina slick with birth fluids. The humblest of particulars for a Godbirth, if you ask me. Humbler even than the stable and grimy feed trough full of hay that served as Jesus’ nursery and bassinet. . . .

I had both of my daughters by Caesarean section. Grudgingly. Each after a full day of hopeful labor—twenty-seven long hours, in Charlotte’s case. I was so exhausted by then that I no longer noticed my mother-in-law’s overpowering perfume or my grad student friends chattering at my bedside or the mountain ridges of pain recorded on the fetal monitor. By the time the doctor decided the baby’s heart would be in danger if it didn’t come out soon, I was sleeping through massive contractions. They had to wake me up to insert the needle for the epidural between my vertebrae and prep me for surgery.

Soon I was lying spread-eagle on a table, the anesthesiologist fiddling with my wrists. Woozy from drugs and exhaustion, distracted by the surgeons’ discussion of the astronauts on the TV screen floating on their tethers around space shuttle Endeavor, and separated from all view of the birth itself by a curtain, I was nonetheless alert to the moment at hand, the emergence of a slippery, wet being into the strange antiseptic metal world in which I lay, the holy metamorphosis of that first thud of life within me into a daughter. I wept. My husband, leaning helplessly over me, wept too. . . .

I tell you all this to give you an idea of what all was left out of the story of the coming of the Messiah—or, literally, the Anointed One. Mary’s labor. Joseph or perhaps some compassionate stranger attending. Their hours of hope and fear. Their exhaustion and relief when it was over. Someone’s grubby knife cutting the umbilical cord. The whole embarrassing nature of birth itself, involving body parts not generally viewed or even mentioned in public, birth fluids deemed impure in most ancient cultures, and such potential humiliations as the accidental release of the mother’s bladder or bowels. The messy, awkward realness of God’s birth as a human being. The cursed result of Eve’s sin, some might say. That’s what God took on to save us from ourselves.

Of course, you might argue that God didn’t see it that way. That, for him, birth—every revolting detail of it—is beautiful. When Jesus was born, God the Father was perhaps as wet-eyed as Kris and I were when witnessing our daughters’ entries into the world. . . . God likely watched over his own emergence from his human mother in unadulterated delight.

There is obscurity in this notion—the same obscurity that attends any examination of Jesus’ dual existence as human and divine or even cursory consideration of the triune nature of God. How is it that Jesus, who was God himself, “grew in wisdom and stature, and found favor with God” (Luke 2:52), as we’re told he did? Later, on the cross, Jesus cries out, “My God, my God, why have you forsaken me?” (Mark 15:34). How could God forsake himself? And during Jesus’ lifetime on earth, a Samaritan woman he meets at a well confidently exclaims, “I know that Messiah . . . is coming. When he comes, he will explain everything to us” (John 4:25). If she is right—and Jesus himself confirms that she is when he responds, “I, the one speaking to you—I am he” (4:26)—she must be speaking of the complete revelations we’ll all enjoy with Christ’s second coming. Because Jesus did come, after all. He stood before her, drank water from her dipper, looked her directly in the eyes, spoke to her. Yet for now, so much remains unexplained.

Consider Jesus’ entry into our world. Mary writhing and panting in the ill-lit stable. The carpenter Joseph, worried, inept, desperately reviewing in his mind a lamb’s birth he had witnessed once in his long-ago youth. Those birth fluids. The blood-smeared infant mewing forth a faint protest from the scratchy hay in the feed trough.

This pathetic spectacle of a birth clothes all the mystery of the Almighty’s promise to his otherwise doomed creatures. I have come to save you from yourselves, God tells us, through one of your own—a Messiah, humbly anointed in amniotic fluid, in urine, in blood. I give you the very word of my own mouth, who is me. He was with me in the beginning. Through him all things—even you!—were made. Without him, nothing else exists. In him is life, and that life is the life of all people.

Patty Kirk is writer in residence and professor of English at John Brown University in Arkansas.