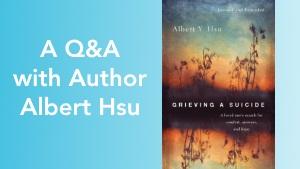 The holiday season can be especially difficult when you’re grieving any kind of loss, but grief from a suicide is particularly complicated. In 1998, Albert Hsu received a call that his father had died by suicide. Last year, InterVarsity Press published a revised and expanded edition of his book Grieving a Suicide: A Loved One’s Search for Comfort, Answers, and Hope. Here, Albert reflects on grief, the current statistics around suicide, where he finds hope, and how we can help those who might be struggling with suicidal thoughts.

The first edition of Grieving a Suicide was published in 2002, four years after your dad’s death, and a year after you became a father. As you did research for the revised and expanded edition, what surprised you?

This was not exactly a surprise to me, but over the past 15 years or so, suicide rates have increased across almost every demographic, from teen girls to older men. A 2016 CDC report found that from 1999 to 2014, the suicide rate in the US increased by 24 percent to a 30-year high. Suicide has become a significant public health crisis. The first edition of my book said that there were about 32,000 suicides in the US every year. Unfortunately, for this new edition, I had to update that number to 42,000 per year. Each suicide leaves behind on average six to ten survivors—loved ones, spouses, children, parents, friends—who are immediately impacted by the loss. That’s hundreds of thousands of people each year, and millions cumulatively, who grieve this particular kind of death.

Tell us a bit about your dad. How do you remember him? What memories do you have of him?

My dad was a PhD in electrical engineering, a brilliant man who designed satellite technology. He was a bit of a stereotypical engineer, a reserved thinker type who was constantly inventing gadgets and improving household devices. He was also a lifelong learner who would go to the library and read up on all sorts of eclectic areas. In his later years he taught himself how to play the clarinet!

Any grief related to the death of a loved one is complicated. Why is being a suicide survivor particularly traumatic?

A death by suicide is what counselors categorize as complicated grief or complicated bereavement. At one level, there’s a layer of loss in grieving the loved one that would take place no matter how the person died. But there’s also an additional layer of trauma, the impact of the suicide that hits the griever and causes significant damage to our psyches. Psychiatrists say that suicide survivors experience trauma similar to that of soldiers in combat or survivors of war or terrorism. So it’s a one-two punch. The grief is hard enough, and the trauma heightens it and complicates it further.

How did your father’s suicide influence and change your faith and your view of the world?

I’ve become much more aware of how fragile this life is, and how all of us struggle with so many things. I’ve come to recognize that suffering is in many ways just a normal part of living in a fallen world, and that we can’t always escape pain or the awful things that happen. But Christians don’t just sit on the sidelines fatalistically. We have confidence that God has acted decisively on behalf of us and the whole world. Through Jesus, God walks alongside us and works through us to alleviate suffering, to be present with those who struggle, and we partner with him as he continues to bring hope and healing to the world.

What was most helpful and least helpful to you in the first year after your dad’s death?

Most helpful: Friends and community that came around me and were a safe place for me to grieve, who would listen and help me process. I was particularly grateful for how my wife, Ellen, was present with me throughout everything and gave me space to just be, whatever I might have been feeling at the time.

Least helpful: People who gave clichés about how things will work out fine or what doesn’t kill us makes us stronger. Christians tend to want to give a quick fix, to say things that show that there’s a plan behind everything. But even if there’s a sense of truth behind it, the way these pat answers are delivered often minimizes and trivializes the reality of the loss.

Is there a metaphor that captures the path of your grief through the years? How has it looked different one year out, five years out, ten years out? Did you gain new insight about yourself and your journey as you worked on the revised edition?

A while after my dad’s death, I had a dream where my family was in a car on a road trip somewhere, and at one point, the car stopped, and my dad got out of the car. He stood on the curb while the car pulled away and the rest of us continued on without him. And his figure in the rearview mirror gets smaller and smaller in the distance. That’s one image of the grief journey. For the most part life goes on without him. While we feel his absence in that he’s no longer in the car with us, the danger is also one of forgetfulness, and we have to be intentional about practicing remembrance and honoring his memory.

As the years go on, grief changes. When he died, I was in my mid-twenties and grieved his loss as my father. But now, in my mid-forties, I grieve him as the grandfather that my sons have never known. I lament all the milestones missed, the holidays and birthdays he wasn’t present at. So we continue to grieve, but in different ways.

What are some signs that might indicate someone is suicidal? What can friends do to help?

The primary factor in a majority of suicides is untreated depression. Hopelessness, self-destructive habits, suicidal ideation or attempts are all warning signs. The American Foundation for Suicide Prevention has risk factors and warning signs here, and also resources for how to help a friend at risk. The good news is that suicide is preventable. People who are at risk are often torn between the desire to die and the desire to live. They’re facing incredible pain and want the pain to stop, and sometimes suicide is the way they choose to stop the pain. But if we can either help reduce that pain or increase their capacity to handle the pain, then we can decrease the risk of suicide.

If a friend seems to be at risk, don’t be afraid to talk to them or intervene. Help is available. Talk to a friend, a counselor, a pastor, a hotline, or even call 911 in an emergency. National suicide prevention hotlines are available at https://suicidepreventionlifeline.org/ and (800) 273-8255.

I imagine that, after living through the suicide of a family member, it’d be easy to despair yourself, or to live in fear that other family members or friends might also die by suicide. What keeps you from despair and fear? Where have you found reasons for hope?

I’m certainly much more aware now of the realities of depression, mental illness, and suicide risk, and it can be scary to realize our vulnerability. But I am also hopeful that the church has become a little more aware of these issues and can minister to those who struggle. After Kay Warren lost her son Matthew to suicide in 2013, she launched http://hope4mentalhealth.com/ and held conferences and provided resources to help churches minister in their communities. Christians shouldn’t be afraid of counseling or medication; these are all ways that God works through to help people.

While losing my dad to suicide has been a difficult, painful journey, I’m grateful that God is a god of compassion, incarnation, and redemption. Jesus knows our pain and has experienced the depths of human suffering, even dying on a cross. But the story doesn’t end there. On the other side of crucifixion is resurrection. For Christians, death is not the end of the story. Jesus has defeated death and gives us hope to carry on.