Have You Stopped Praying? | InterVarsity
Skip to main content

Have You Stopped Praying? 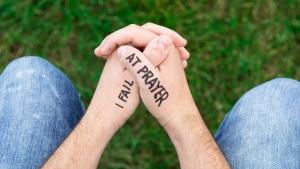 But I suck at praying.

I have gone days, weeks, even months without an authentic prayer time. I have told myself dozens of times “I’ll just pray before bed,” and then I close my eyes and I’m asleep. I have gotten angry, felt hopeless, and sunk into private discouragement over my prayerlessness. And I have told the following lies:

Why We Don’t Pray

Have you stopped praying? Prayerlessness is an issue I’ve dealt with—and as a full-time minister, it’s been a source of shame for me as well. Until I mention my struggle to others and realize I’m not alone.

Jesus wants us to pray (read Matthew 6:5-15 for proof). But many of us don’t. Why not? Over the past several years I’ve discovered some key answers to that question. And in the process, I’ve begun to pray again.

Reason #1: We think prayer is harder than it is.

Remember all those retreats, teachings, and trainings on prayer? After a while, it just got overwhelming. What was I supposed to be doing again? Which person of the Trinity was I praying to? How was I supposed to position my body, and for how long? And what time of day was best?

When I decided to pray again, I determined to get to the heart of prayer, connect with Jesus, and simply pray. For me, a big part of this has been journaling (which can also get a little overwhelming, but stick with me here). After spending some time studying Philippians 4:4-6, I developed the following one-page tool to help me pray every weekday morning: 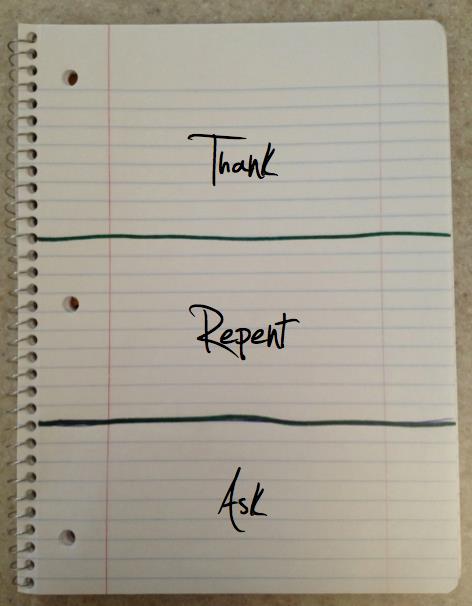 Breaking prayer down into these three essentials has done wonders for me. I started engaging with God with this tool two years ago, and I have prayed more over those two years than the previous ten combined. And I don’t always write in those blanks. Sometimes I draw in them. Sometimes I put them in my mind and pray silently through them while taking an early morning walk. It’s not hard—and it helped me start praying again.

Reason #2: Other stuff gets in the way.

Let’s face it, prayer is often the first thing that gets pushed out by other things. More pressing things. More urgent things. More fun things. I have three papers to write, two difficult conversations to have, five miles to run, and these backlogged episodes of Downton Abbey aren’t going to watch themselves!

The only way I’ve been able to overcome this obstacle is by putting prayer in my schedule. That may not sound very “Spirit-led,” but trust me, it is. Consider the fact that my schedule also includes lunch dates with my wife. Jessica has never told me to stop scheduling dates with her because it’s not romantic. She appreciates that she’s a priority and that I’ve chosen to put other things aside for her.

If I want to conquer my prayerlessness, I need to schedule those times in, without buying into the lie that putting prayer in my calendar makes it less spiritual. If putting something in my planner that draws me closer to Jesus and helps me rely on him more isn’t Spirit-led, I don’t know what is.

Reason #3: We feel guilty about our prayerlessness.

Those of us who have gone a long time without praying can feel paralyzed in our efforts to start again. Guilt was the biggest source of paralysis for me. I felt like it had been so long since I had communicated in any real way with Jesus that he wouldn’t be interested in my efforts to reengage. A total falsehood I know, but one that kept me from praying for far too long.

That’s why, on the cover of my journal (and the three that have preceded it), I’ve written these words with a Sharpie:

“I can start again.”

Those four words are truer than my guilt. They are what I need to see on those mornings when it’s been a week since I’ve prayed. They also prevent me from starting each journal entry with “Well, it’s been a while since I prayed . . .”

Have you stopped praying? Don’t let over-complication, outside distraction, or guilt get in your way of beginning once more. I’ve started again. So can you.

We could recommend a lot of great resources on prayer for you—but we'd rather have you actually start praying again. Why not right now? You can start again.

Steven Grahmann is the Area Director for InterVarsity Christian Fellowship in Arizona and has been on staff since 2000. He lives in Flagstaff with his wife, Jessica, and two boys.

wow! this was an amazing

wow! this was an amazing article! im from the Intervarsity of Philippines! i was really blessed.

Thank you for this.

Thank you for this.

Well put. For me the key

Well put. For me the key issue is a combination of #1 and #3, although my experience of #1 is less about remembering the correct procedures than about living up to a problematic ideal. And I think InterVarsity, our churches, and other influencers of Christian culture, despite their good intentions, have something to answer for here. Every talk, retreat, and Bible study on prayer that I've ever attended has left me with the impression that the "correct" way to pray, or at least the "best" way, is to get up well before dawn and spend an hour or more in focused conversation with one or more persons of the Trinity before tackling the rest of my day. That's what Jesus did, so that's what we should try to do, right? That's the message we're given. But getting up extra-early is hard, so I end up not doing it. My prayers are abbreviated to a few minutes in the morning, a few more at meals, and maybe a few more at odd times throughout the day. The distance between what I actually do and the ideal I've been taught isn't a vast, unbridgeable chasm, but it looks like one, so I feel guilty that I'm letting it exist, and the guilt widens the chasm even further. It *looks* like I have to make too big a change too quickly, so I don't change; it *looks* like I have to get from here to aaaaaaaaaaaallllll the way over there all at once, so I don't take any step at all. That's why I appreciate your grace-filled approach here so much, and in particular your "I can start again" note. "I can start again" is something we need to tell ourselves more often. Thank you for writing this article.

Thank you! What a wonderful

Thank you! What a wonderful reminder - don't focus on the guilt; I can start again.

This was so simple and

This was so simple and practical. Having been through the "cycles" of prayer/prayerlessness myself, I found this article very helpful!