How God Helps Us Love Ourselves | InterVarsity
Skip to main content

How God Helps Us Love Ourselves 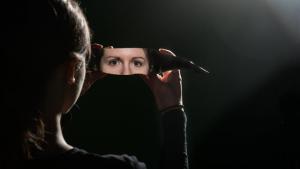 Just last semester, I was leading a Bible study with some friends who don’t follow Jesus, and one of them texted me out of the blue asking, “Erica, can God help me love myself more?” She had just participated in her first Bible study—one on Genesis 3—in which our group had highlighted the way that Adam and Eve began to feel shame and wanted to cover themselves.

This dynamic of shame and hiding, both from God and from one another, still colors our human experience to this day. How many of us have felt the pain of shame or guilt that causes us to believe that we are unworthy even of being around others? How many of us fear that there are certain things we just can’t talk to God about, or that we are too messy for God to love?

But here’s what else we noticed during our study: God could have simply destroyed humans after they disobeyed him, dishonored him, and hid from him—but he didn’t. Instead he responded with a plan, one that he began immediately in his very first actions in a post-Fall world, and one that deals with the shame of all peoples over all time. The Creator got his hands dirty, sacrificed the life of an animal, and covered Adam and Eve’s shame with its skin.

Jumping over several centuries to the life of Jesus, we might ask what his story has to do with the shame and hiding we see back in the Garden. But as we read about Jesus, we see that he too covers over shame and then gives honor to those he encounters who open up to him.

Simon, one of Jesus’ first followers, felt deep shame when he witnessed Jesus’ power through a miraculous catch of fish. “Go away from me, Lord; I am a sinful man!” he said, wanting to hide his shame and embarrassment. Jesus responded by choosing Peter to take on a new vocation in partnership with him: fishing for people.

A woman who had previously had five husbands and was now living with another man encountered Jesus when she came to draw water at a well. He let her know he knew her secret and saw her shame, but he didn’t stop there. Instead, he went on to honor her by telling her his true identity—Messiah—and by sending her back to draw the others from her village to him. When the woman tells the villagers, “Come, see a man who told me everything I ever did,” she seems genuinely excited, not ashamed.

Another woman, who had been bleeding for 12 years and who was therefore seen as dirty and excluded by her community, crept through a crowd just to touch Jesus’ cloak in the hope that she would be healed. When her sickness vanished and she was indeed healed, Jesus stopped the crowd to look for her. After she told the whole story of her sickness, shame, and healing, Jesus honored her in front of the very people who had rejected her, calling her “daughter” and proclaiming for all around to hear, “Your faith has healed you.”

Jesus and My Shame

What do these stories have to do with us today? How can God help me love myself?

His healing of our shame starts when we become exposed and vulnerable before him. Instead of hiding, we admit what he already knows about our places of shame.

In each of these stories, Jesus met the vulnerability of those who were caught in shame not with further condemnation and isolation but with love. He drew them close, revealed more of himself to them, honored them, and gave them new purpose.

Many of us know that God’s love for us and his creative plan culminated in Jesus’ voluntary, humiliating death on the cross. But do we really believe that Jesus, for the joy set before him—part of which is being in close relationship with us—“endured the cross, scorning its shame, and sat down at the right hand of the throne of God”?

In Romans 8 Paul asks, “Who will bring any charge against those whom God has chosen? It is God who justifies. Who then can condemn? No one. Christ Jesus who died—more than that, who was raised to life—is at the right hand of God and is also interceding for us. Who shall separate us from the love of Christ?” I’m convinced that Peter was able to start fishing for people, and the woman at the well was excited when Jesus told her “everything [she] ever did,” because they knew that Jesus knew their shame, and still wanted them.

Is there a corner of your life that you are ready for Jesus to transform? I hope that today you’ll begin to feel new freedom and love for who you are as you ask Jesus to take on your shame.

The author grew up in a culture that emphasizes guilt and innocence, and recently has met many friends from cultures that deal more in shame and honor. She has increasingly seen how the Bible speaks to both of these lenses, and it has begun to impact the way she shares stories about Jesus. She is on a journey to discover the beauty of God's love in every culture, and to look for her honor and significance from Jesus alone.

Learn more about how Jesus can cover your shame by watching Prodigalia or The Deep, or by listening to Chai Ling’s story.