How I’m Changing the World | InterVarsity
Skip to main content

How I’m Changing the World 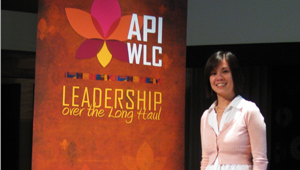 After attending the Asian Pacific Islander Women's Leadership Conference (APIWLC), I've been reflecting on what it means for me to be a leader as an Asian American woman.

Throughout my years with InterVarsity, I've always had a clearly defined leadership role. As a student I was on my chapter's leadership team and led a Bible study. In my three years as a campus staff member, I discipled individual students and taught and trained groups of students.

But now that I’m a graphic designer with twentyonehundred, I'm just a minion. Projects are assigned to me and I need others’ approval to complete them. I have to ask permission to implement new ideas. It’s a big contrast from the do-it-yourself grassroots mantra we encourage in our students and staff on campus.

The project for which I do have some leadership (2100's weekly infographics) also happens to be the most unofficial part of my job, treated as the lowest priority. As such, I've always felt hesitant to embrace my role as a "leader” for this project.

Calling myself a leader in my current job feels like a bit of a stretch. APIWLC stirred in me a tension: the desire and ability to lead without knowing how that’s supposed to look right now.

Being an Asian American Woman at Work

Being an Asian American woman significantly impacts how I interact with my work context. I am currently the only Asian American woman on my team, and one of five in our office of about 100 people. My team (as well as the office) is dominated by white, married, older men. In its 35+ years of history, twentyonehundred has always been led by a white man.

Some people may think race or gender no longer matter, that we're in a "post-race" world. But it's something I am always aware of, especially now that I do not have a local Asian American community. Whether or not it's felt by others, I am always conscious when I am the only Asian American in the room. I take up less space, physically, yes, because I am 5'2" and less than 100 lbs. But I also take up less space in the conversation, in the way the dominant culture is formed, in decisions that get made.

My ethnic and gender identity are all wrapped up with my perfectionist tendencies, my hesitancy to speak up, and my desire to maintain harmony. This raises many challenges in how I represent my voice, point of view, and experiences to the people I work with.

At the conference, we talked about how Asian American women often sell themselves short. We rarely take credit for our accomplishments; we do not like to tell people that we're good at something or that we have something to contribute. It goes against everything we were told about how to be a "good Asian girl."  I've realized this is very much how I operate. I'm self-deprecating and hesitant to feel proud of my achievements. When I do receive praise, I feel sheepish, even guilty. I tend to use humor to offset my discomfort in talking about my abilities and qualities.

Several times throughout the conference, we were reminded that God created us in his image. I have worth, I have value. I am a daughter of God, dearly loved and called to do good things that he prepared just for me. I am enough.

Hearing that was deeply healing and encouraging. I came into APIWLC feeling emotionally drained, unexcited and unconfident. In spite of these feelings, I strongly sensed God’s reassurance that he was present with me and wanted me to be there. He reminded me, "I am writing your story, Laura. Trust me."

The journey continues for me, and for Asian American women. I want to believe that like Esther, God has uniquely called each of us "for such a time as this." But I also am aware that there are obstacles: deep-set cultural norms, working against the majority, our inhibitions and bad habits, the desire to go the easy route.

I wish I could conclude these reflections saying that now I feel totally empowered to change the world. But I'm not so naive to believe it'll be easy. I'm still learning, processing, and growing into the Asian American woman, and the leader, that the Lord has made me to be. Only he knows the rest of the story.

Laura Li is a graphic designer for 2100 Productions and former Campus Staff Member with the Asian American chapter at her alma mater, the University of Michigan. This post originally appeared on her blog: la-raison.blogspot.com.

Wow! What an engaging and