How InterVarsity Is Adding to Slum Populations 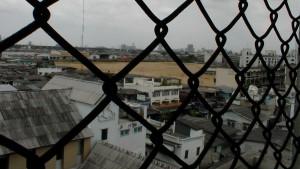 The cover story for the September 2013 issue of Christianity Today introduces us to missionaries like InterVarsity alumna Michelle Kao. Missionaries—dubbed  “New Friars”—who have followed Christ to the slums of the earth to serve and live in solidarity with the poor.

This summer, 70 InterVarsity students and staff followed Christ to five different slum communities around the world on a Global Urban Trek—just like Michelle did as a student—to discern if God is calling them to become New Friars as well. In the Christianity Today article and below, InterVarsity’s Associate Director of Missions, Scott Bessenecker, reflects on a 2011 Trek visit to Bangkok, the injustice experienced by the poor God loves, and the kinds of prayers we all should pray.

Global Urban Trek: An Immersion into the Deep Wounds of Poverty

From the Asok BTS station (Bangkok’s Skytrain) it is a short walk to Soi Cowboy. In the summer heat the frigid Skytrain air conditioning bites my sweaty skin and a barrage of TV commercials blares from screens mounted on the walls of the car, dangling before us products I have seen and some I haven’t. I don’t watch much TV in the U.S. but I can’t recall ever seeing skin lightening commercials. Here, they are as plenteous as acne ads, as if dark skin were a dermatological illness. It is another reminder of how the world is bent toward the minority of light-skinned people that occupy the planet.

The BTS vomits us out onto the platform at Asok and we are embraced by the humidity. At first the warmth is a welcome arm around the shoulders, and then it becomes a suffocating blanket. I am with a handful of university students participating in the Global Urban Trek. We are preparing to walk through one of three red-light districts catering to westerners. After our briefing by Ivan and Kashmira, a couple who serve with Youth With A Mission and live in a poor area alongside sex workers, the student’s eyebrows are arched in trepidation and they look out on the world through nervous eyes. They are mostly quiet. One student, Andrew, pulls me aside. “This is the most real thing I have ever done,” he tells me.

We pair up to walk the gauntlet of go-go bars on either side of the soi. Ivan sends us out in intervals, like animals boarding the ark in anticipation of the mighty flood. We are told to look with the eyes of God, listen to what he tells us, and pray. Although I do this prayer 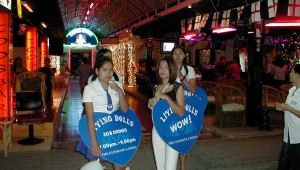 immersion every year I am too overwhelmed and distracted to hear much from God in the moment. Women line either side of the passageway like boxes down the cereal aisle of a grocery store. Music thumps, the street swarms with mostly older men from the west, and lights pulse in hopes of outdoing the bar next door. It’s enough sensory stimulation to trigger a seizure.

Outside one go-go bar I see something I haven’t seen in the dozen years I’ve been doing this. The women here are adorned with identical necklaces, and each necklace dangles a small black disc displaying a number. To those shopping for a sexual encounter, these are not human beings made in the image of God, full of intelligence and creativity and complexity. They are not unbelievably creative creatures capable of wielding the authority and intellect to build a bridge or transplant a kidney or maneuver a craft 10,000 miles in space. These women are commodities; they are items for sale. Their bodies can be ordered by number, just like an item on the Extra Value Menu at McDonalds, so that one doesn’t have to remember a name, doesn’t have to confront the reality that these are our sisters. It is easier to exploit a nameless body without the inconvenience of pricking one’s conscience. Some of these men will pay more to have their lawn mowed and give more dignity and respect to the kid who mows it.

We return to the Bangkok Christian Guesthouse to meet up with the others who have had similar experiences in other red-light districts. We are shell shocked. Some students ask hollowly, “What’s wrong with me? Why can’t I feel anything?” Others weep in prayer. Still others are taken to dark places in their past—to that moment of their own molestation. The debrief is slow and a little painful, but we must begin to sort out what we’ve seen—looking at such horror through God’s eyes.

Every day our appetites are whet for any number of things. A sizzling steak bounces on a griddle in slow motion, a glistening car speeds smoothly along a picturesque boulevard, seductive pictures call to our base nature of covetousness. The Global Urban Trek is our attempt to whet our appetites for the kingdom of God. We want to arouse a covetousness for God and for the kingdom Christ said was at hand.

After orientation students will be sent to live alongside our friends who reside in urban poverty all over the world. They will begin to drop the labels they have been taught, monikers like “the poor” or “the prostitute” or “street kids,” and they will exchange these with other words—auntie, uncle, neighbor, Mario, Klu Moi.

(Originally posted on Scott’s blog, The Least of These.)

How is your InterVarsity/USA chapter or church fighting human trafficking or poverty?

Enter a comment below and automatically be entered into our #FreeBookGiveaway.

We will pick one random winner by 1 p.m. (CST) on Monday, September 16, 2013. The winner will receive a signed copy of Scott’s book The New Friars: The Emerging Movement Serving the World’s Poor.