How Jesus Has Influenced Education | InterVarsity
Skip to main content

How Jesus Has Influenced Education 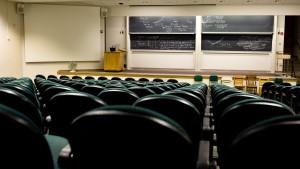 But did you know that Christians have already left a long legacy in the world of education? It’s true. The brilliant scholarship and teaching of Jesus sparked some of the most impactful and revolutionary education initiatives that the world has ever seen.

In his book Who Is This Man? John Ortberg offers snapshots of times and places where Christians were at the forefront of literacy and intellectual development. We’re offering you an excerpt of Ortberg’s words below to inspire you to think about the legacy you’re leaving on your campus and in the world.

Education changed . . . when Martin Luther emphasized from the New Testament the priesthood of all believers. Luther said it means that every person needs to be able to read and write so they can study the Scriptures for themselves because we are all to be priests now. This led to a goal of universal literacy for everybody in a society.

Luther said he would write a book about parents who neglect the education of their children: “I shall really go after the shameful, despicable, damnable parents who are not parents at all but despicable hogs and venomous beasts devouring their own young.”[1] (Luther apparently did not have a hard time expressing his emotion.)

In America, the first law to require mass universal education was declared in Massachusetts in 1647. It was called, believe it or not, “The Old Deluder Satan Act.” “It being one chief product of that Old Deluder, Satan, to keep men from the knowledge of the Scriptures . . . ; and to the end that learning may not be buried in the graves of our forefathers.”

This is a beautiful vision that everyone should learn: that ignorance is the devil’s tool, that God is the God of truth.

George Marsden noted that “one of the remarkable facts about American history is that within six years of landing in the Massachusetts wilderness, Puritans established what would soon become a reputable college.”[2] This is from its student handbook: “Let every student be plainly instructed and earnestly pressed to consider well, the main end of his life and studies is, to know God and Jesus Christ, which is eternal life, (John 17:3), and therefore to lay Christ . . . as the only foundation of all sound knowledge and learning.”

That was Harvard University. Then educators began Yale and William & Mary and Princeton and Brown with the same founding purpose, that the main end of one’s life and studies is to know God and Jesus Christ. All but one school started before the American Revolution was begun to serve the Jesus movement.

Ninety-two percent of the first 138 colleges and universities founded in America were begun for followers of this uneducated, itinerant, never-wrote-a-book Carpenter.

Many people have heard of Sunday school. Most have no idea where it came from. In 1780 a Jesus-follower in Great Britain named Robert Raikes could not stand the cycle of poverty and ignorance that was destroying little children, a whole generation. He said, “The world marches forward on the feet of little children.”[3] So he took children who had to work six days a week in squalor. Sunday was their free day. He said, “I’m going to start a school for free to teach them to read and write and learn about God.” He did, and he called it “Sunday school.”

Within fifty years, there were 1.5 million children being taught by 160,000 volunteer teachers who had a vision for the education of a generation. Sunday school was not a privatized, optional program for church kids. It was one of the great educational triumphs of the world.

The alphabet of the Slavic peoples is called Cyrillic. It was named for Saint Cyril, who was a missionary to the Slavs and discovered they had no written alphabet. Thus he created one for them so they would be able to read about Jesus in their own language.

In nation after nation, Christian missionaries found languages had not been committed to writing. So in acts of remarkable sacrifice, they devoted their lives to this task. In many cases, the first efforts of the scientific study of a language were done by Christian missionaries. They compiled the first dictionaries. They wrote the first grammars. They developed the first alphabets. The first important proper name written in many languages was the name Jesus.

A Methodist missionary, Frank Laubach, cited an extraordinary encounter with God about a century ago that put him on a mission to lift the world out of ignorance. He began a worldwide literacy movement. The phrase “Each one teach one” flows out of the extraordinary life of this man. He traveled to more than a hundred countries and led to the development of primers in 313 languages. He became known as “the Apostle to the Illiterates.”

(Excerpted from John Ortberg, Who Is This Man? The Unpredictable Impact of the Inescapable Jesus [Grand Rapids: Zondervan, 2012], 66-68. Used by permission.)

Who will you become known as? And how is God calling you to use your mind for his glory? By teaching the illiterate, perhaps? By changing the culture of the academic world? By showing how intellect and faith fit together in your studies? Pay attention—and then walk forward in obedience, as the faithful ones before you have done.

John Ortberg is the pastor of Menlo Park Presbyterian Church in Menlo Park, California. He is the bestselling author of When the Game Is Over, It All Goes Back in the Box; The Life You’ve Always Wanted; and If You Want to Walk on Water, You’ve Got to Get Out of the Boat. John and his wife, Nancy, have three grown children.