Inside the Bubble: What Jesus Does with Your Limits | InterVarsity
Skip to main content

Inside the Bubble: What Jesus Does with Your Limits 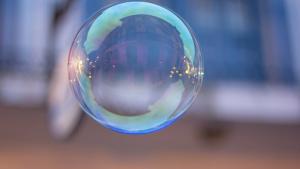 The human brain is breathtaking and maddening.

Even while it dazzles us with its seemingly endless capacities, it bedevils us with its limits. Isn’t it fascinating how the smartest, most talented people can still display the most puzzling blind spots? The physics genius who cannot make small talk in a checkout line, for example, or the virtuoso musician who’s hopeless at spelling.

Anytime we marvel at what the brain can do, if we stick around long enough, we eventually get a look at what it can’t do. How can our minds seem to have such unlimited potential and yet still be so limited?

The fashionable term for these limits right now is “bubble.” Its most popular use is as a diagnostic tool, whether applied to ourselves or others. It’s common to hear people say things like, “You know, I’m trying to grow in that area. I just didn’t know I really grew up in a bubble.” Or: “Ugh, I can’t believe they posted that; it’s so ignorant. Of course, it’s because of their social media bubble—they never listen to anyone they don’t agree with.”

Personal and cultural awareness of our bubbles has likely never been higher. And each time we mention or reflect on them, whether we know it or not, we’re grappling with what it means for humans to be limited.

An unlikely voice in this conversation is the Apostle Nathanael. In John 1:44–50, Philip comes to him saying he’s met the Messiah, “Jesus the son of Joseph from Nazareth.”

“Nazareth!” Nathanael responds. “Can anything good come from Nazareth?”

Like most of our instinctive, gut-level reactions, Nathanael’s words revealed something he might have wished had stayed hidden: in this case, a mindset shaped by the bubble of cosmopolitan Jewish life. Nazareth? Get out of here. That’s a backwater, flyspeck, junkyard, nowhere place. Be serious, Philip. Wherever the Messiah’s going to come from, we both know it can’t possibly be Nazareth.

Nazareth was outside the limits of Nathanael’s experience. His whole life had shaped his imagination to exclude it from Messianic possibility, to give it little thought except, perhaps, a contemptuous shrug. If Philip’s invitation hadn’t come from outside of his bubble, Nathanael might not have reacted so strongly. But it did.

It’s tempting to sit in judgment at Nathanael’s reaction. Yet when our own bubble gets pricked, doesn’t our Nathanael-ness similarly spring up? We know we don’t know everything or have perfect understanding. But it still confuses and maddens us when that fact hits us up close. For people who are clearly not omniscient, it turns out we’re quite touchy about it.

You and I have a bubble. Everyone does. No matter who we are or where we grew up or how enlightened we think we are, we all have a bubble. That is what it means to be limited. God is the only being in the universe who doesn’t have a bubble. He knows all and can do all. But not us. We are always, ever shaped by our experiences and environments. To be human is to be limited. Inescapably bubbled.

Jesus’ response to Nathanael’s bubble is a priceless mixture of grace and power, of addressing our limits from the inside and outside. “Now, here is a genuine son of Israel,” he says as Nathanael approaches him. “A man of complete integrity.”

Bear in mind that Nathanael had just insulted Jesus’ hometown with a display of shallow ignorance. Yet Jesus, with no hint of sarcasm, calls him a man without a lie in his heart. How can this be? For us, this is nowhere close to our natural instinct. Yet for Jesus, Nathanael’s bubble was no impediment to a work of redemption. Seeing the barricades of his limited mind, Jesus slid between them and instead spoke words of life to him.

Nathanael, understandably, was taken aback: “How do you know about me?”

Jesus replied, “I could see you under the fig tree before Philip found you.” With this, Jesus quickly and decisively explodes Nathanael’s bubble with a demonstration of omniscience. Nathanael’s limited human mind bumped into God’s infinite mind through the incarnate Son. Jesus gives Nathanael a second helping of grace, this one harder than the first but no less valuable: I’m something entirely different from you, Nathanael. What are you going to do with that? As he does, the limits of Nathanael’s holy imagination burst entirely, ready to be refashioned by Jesus into a glorious, sanctified expansiveness.

We are Nathanaels at heart. To know this is to own that we make so much of the world into a Nazareth. There are ideas, experiences, ideologies, and, yes, theologies that don’t look like ours or “sound right” to us. We can’t hear them—are even threatened by them—because our bubbled souls bounce them away. It is enormously humbling to know that we carry our inner Nathanael into every conversation, every interaction, and every quiet time.

But to know this is also to glimpse the horizon of an extraordinary new life, exemplified by Nathanael and Jesus’ final exchange: “Rabbi,” Nathanael cries out, “you are the Son of God—the King of Israel!”

And Jesus answers, “I tell you the truth, you will all see heaven open and the angels of God going up and down on the Son of Man, the one who is the stairway between heaven and earth.” Or to put it another way: I know that was hard, Nathanael, but listen: if you follow me, if you keep letting me pull you out of your bubble, you’ll see things you never dreamed of before. Spiritual vitality you can’t even imagine, a heart overflowing with virtue and dynamism. A life like no other.

In God’s kingdom, this is what it means to be limited: To see and embrace our inner Nathanael. To be honest about our bubbles—to know that they exist, where their edges are, and how we react emotionally when they’re touched—and to hunger for Jesus to come and absolutely blow them up, knowing that, outside our bubbles, even more of God’s soul-satisfying life awaits.

God’s invites us to not only join him in the suffering around us; he is also inviting us to explore our own personal disappointments and losses on a deeper level. This difficult time can be an opportunity to cultivate newness.