Jesus Is Not Your Vending Machine | InterVarsity
Skip to main content

Jesus Is Not Your Vending Machine 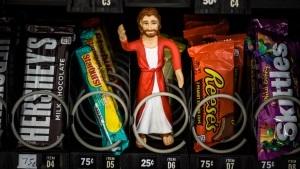 Have you ever put money in a vending machine and then had the bag of chips get stuck? It’s an infuriating experience, and hardly matters that I’ve only lost about 50 cents. I put that money in the machine and I expect to get my chips! So I will do whatever I can to get my snack unstuck: stick my hand as far up the delivery slot as it will go; kick, shake, and rail at the machine; and in general make a fool of myself. But usually, there’s no getting those chips out.

Of course, that’s not really how vending machines are supposed to work. Most of the time, you go to a vending machine, scope out the offerings, insert your money, make your selection, and voilá! With a twirl of the dispenser, the processed goodness of your choice falls into your waiting hands.

Often we treat Jesus like he’s our personal vending machine—someone who’s there to answer our prayers as we see fit. Like we are the boss. Like we know what we really need in this life if only he’d respond to our demands. And then when he doesn’t deliver, we get angry (or bitter); we wonder about his goodness; we rail at him and blame him that our life is not as we’d pictured it—kind of how we act when a bag of chips gets stuck in a vending machine. But Jesus is not our vending machine.

Jesus is not our vending machine because, to begin with, most things in a vending machine aren’t good for us. We may trick ourselves into thinking that that Snickers bar is going to fill up our empty stomachs, but a half-hour later, there we are again, standing in front of the vending machine feeding quarters into the slots, believing one more snack will satiate us. We want another Snickers bar, but it’s not what we need. What we need is a meal.

I’m a parent, so I know a thing or two about the difference between wants and needs (notice I did not say I was an expert). Here’s an example of a conversation that happens almost daily at my house between me and my three-year-old son:

“Mommy, I feel hungry. I want some ice cream.”

“I hear that you want ice cream, but you’ll ruin your appetite.”

And so it goes on and on and ever on. As a parent I know that ice cream may taste good, and it may address Fox’s hunger, at least a little, but a balanced meal will be a lot more satisfying and will give him nutrients he needs to stay healthy. So I say no. But Fox only knows that he’s not getting what he wants, and he’s still hungry (at that moment, anyway).

There’s no arguing with three-year-olds—but also, aren’t we like this with Jesus? We are toddlers who can’t see the meal for the ice cream.

Jesus knows what we want, but more importantly he knows what we need. When we demand that he give us what we want (or think we need), I imagine him like an exasperated parent, shaking his head and saying, “No. I’m trying to tell you that if I give you what you want, I’ll be depriving you of what you really need.”

Of course, that imagined headshake is speculation. But we do know that Jesus has promised us good things from God—his Father and ours. In Matthew 7:11 he says, “If you then, who are evil, know how to give good gifts to your children, how much more will your Father in heaven give good things to those who ask him!” He doesn’t promise to answer our specific demands (or our demands at all, no matter what the prosperity gospel preaches), but he does invite us to pray, and he promises to give us good things. Just what those good things are, he knows better than we do. He is God, after all—which leads me to my next point.

This seems obvious, but it’s worth naming: we shouldn’t treat Jesus like a vending machine because he’s the Lord of the universe and we are not. Does it strike anyone else as supremely narcissistic that we act as if we can order Jesus to do anything and expect him to obey us? This is an issue of posturing. Jesus has certainly invited us to offer him our prayers—which include the desires of our hearts—but these prayers are part of our relationship with him. And we are not the boss of him. He is the boss of us. And yet, when we demand things of Jesus, we are not only assuming that we know what’s best; we are also implying that we are in control of him.

My husband and I will occasionally refer to Fox as “boss” because he likes to order us around. “Mommy. Stop talking!” he proclaims. “OK, boss,” I’ll say. These orders are partly developmental, but I still bristle, because he is not in charge. Or at least, he shouldn’t be. I don’t want him talking to me like that, or to any other adult for that matter. It’s not that I expect him to not make requests of me, but when he yells, “Stop talking!” he’s not asking, he’s demanding.

It bears repeating that Jesus wants good things for us and tells us to pray to him. A little earlier in Matthew 7 he says, “Ask, and it will be given you; search, and you will find; knock, and the door will be opened for you. For everyone who asks receives, and everyone who searches finds, and for everyone who knocks, the door will be opened” (verses 7-8). But asking doesn’t mean demanding. And it also doesn’t mean that Jesus will give us anything and everything we ask for; he wants to give us good things, but those good things are according to his will, not ours.

In general, Fox is a good kid. He is sweet-natured and funny, and he naturally wants to please us. It pleases me to no end when he asks to read a book instead of watch a show, or to drink some water instead of juice, or when he makes the decision to take a nap instead of spending his time in bed kicking the walls. He may not always know what’s best for him, but as his parent I rejoice when I see him making strides toward wisdom and self-discernment.

We can (and sometimes do) act like toddlers with Jesus, demanding what we want without regard to what we really need. But ultimately, if we are in relationship with him, the Holy Spirit will be at work in our lives, transforming our hearts and minds so that we will know his will and begin to pray for things that really are good for us.

Jesus Is Not Your Sports Buddy

Jesus Is Not Your Trophy

Jesus Is Not an Accessory

Jesus Is Not Just Your BFF

Jesus Is Not Your Superstar
Blog Categories:
Scripture
Spiritual Formation