Jesus as Prophet—Repentance & a New Reality 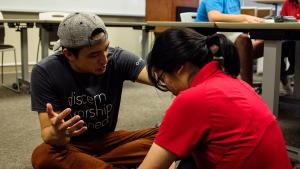 What roles does Jesus play in your life? In college, I would have said things like “Savior,” “Lord,” “Friend,” and “Redeemer” due to my church upbringing and perhaps whatever worship songs were sung that Sunday. Out of all the possibilities, however, I’m convinced that “Prophet” would have been on the bottom of my list. And I don’t think I’m alone in this either.

After the loss of George Floyd, Ahmaud Arbery, and so many other precious Black lives, I have been thinking about how Scripture says we are being formed into the image of Jesus (Rom 8:29). I can’t help but wonder how this “prophet” gap in my—and my students’—perspective of Jesus has affected our formation and actions, or lack thereof, in response to such losses. How would our witness be different? What would we have spoken more about? What would it mean for us to be more prophetic?

The Role of the Prophets

Prophets are a peculiar group in the Bible. They’re best known for predicting the future—as well as being major party poopers—but they were so much more. They were predominantly charged with calling God’s people to return to right relationship with him. As the Bible Project explains, they had several roles:

The prophets called out where God’s people had wronged each other and therefore had wronged God, ranging from treating foreigners unjustly to relying on political alliances for security (Ezek 22:7; Is 30).

Prophets called the people to repent and turn from their sins (Is 1).

Prophets declared the consequences of continued rebellious, unjust behavior as they spoke about the Day of the Lord, where God would pour out the full consequences of their actions (Is 13).

Prophets painted a portrait of a new reality where not only God’s people but also people from all nations on earth would be restored to him (Is 11).

Prophets were God’s loving wake-up call to people who had normalized social injustice and idolatry. They offer a glimpse of God’s heart that longs for the righting of all relationships: with the land, other people, and God himself. And that’s why Jesus’s role as a prophet is such good news.

When Jesus comes onto the scene, he picks up where the prophets left off. He calls out people’s sin but also invites them to repent (Lk 11:39–42). Without Jesus’ prophetic voice, we may have a Jesus who’s a king, priest, and teacher, but we’d lack a Jesus who convicts us when we’re wrong.

When we practice being a prophetic community, it becomes a way of witness to the world, helping others see God’s goodness, like in Charlene’s story shared in Sarah Shin’s Beyond Colorblind. Charlene was an African American student whose father told her she could be anything she wanted in college—anything, that is, except a Christian. Needless to say, Charlene grew very opposed to faith.

As school began, several aggressive racial incidents happened. One student had an expletive scratched into the hood of her car. The school newspaper published articles of how Black students didn’t belong at such a prestigious university, and Black students were being treated horribly across campus.

Charlene searched for any groups who were actively responding to these events and heard about one student group—InterVarsity’s Black Campus Ministries (BCM)—praying and protesting. Surprised, she began attending BCM meetings. I love you, but I don’t love your God, she thought.

But she began realizing that these students really believed that God cared about justice and heard their prayers of hurt and isolation. It ultimately led her to commit her life to Christ.

When we embrace Jesus’ prophetic role, we not only find a Jesus who calls us collectively out of patterns of darkness but also invites us to love a hurting world. It may bring some of us dissonance, but as we press into that instead of avoiding it, we will meet Jesus, who longs to right our relationships with both the Father and all people.

The Day of the Lord & a New Reality

But wait, what about the other aspects of a prophet’s role? In Luke 4, Jesus quotes from Isaiah 61 but stops mid-verse, leaving out the “day of vengeance of our God.” Tim Keller remarks that this is very striking . . . because Jesus didn’t come to bring the vengeance of God. He came to bear it. He didn’t just stand with us who are wronged; he stood in for us, who wronged others. He didn’t just foretell consequences; he took them!

Jesus doesn’t just paint a future picture of the new reality. Jesus is the new reality. And he’s inviting us to live into that new reality and prophetically proclaim it. How will your community live out the role of the prophet?

By Kelly Aalseth
A Prayer for Lingering in Racial Discomfort

This Welcoming Prayer has significantly helped me in processing strong emotions, and I’ve adapted it for this season. This type of prayer helps us to welcome the emotions and learn from them, to let go of the things that tempt us to leave too soon, and to open ourselves to God.