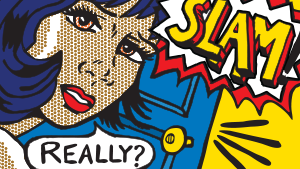 My longest adult relationship before marriage lasted about a year. But it limped along for six months too long.

For quite some time after we broke up, I wanted to blame him for my heartbreak, for all the ways that the break-up shaped the next few years of my life. After all, he was the one who kept waffling, telling me he liked me, telling me he might fall in love with me, but then saying he just didn’t know yet.

Of course, it’s not that simple.

I was the one who stuck around hoping that he would fall in love with me, believing—without a shred of evidence—that the more I tried and the harder I pulled for us, eventually his feelings would catch up. I put all my hopes into the relationship, investing so much of my energy, my plans, myself.

And the more I clung, the more fear took over.

At the root of it all I was afraid of being rejected and of what that would say about who I was.

The Sting of the Slam

Eventually, my fears were realized. He broke up with me. I remember him saying something like, “Any two people could probably make it work if they had to, but it wouldn’t make for a good relationship. Don’t take this as a slam, but you’re just not right for me.”

I took it as a slam.

He was right, though. Sure, he should have done some things differently—but I should have too. I was so afraid of rejection that I hung on to a relationship that was doomed three or four months after it began. I saw the signs of unhealth from the outset but refused to acknowledge them: the conversations that were like pulling teeth; the complete lack of overlap in interests, hobbies, and outlooks; the wariness of my friends and family who were looking on; not to mention the fact that we were on completely different pages when it came to how committed we were to the relationship.

My fear of rejection ruled me. I was too afraid to break up with him. And I was afraid that if I mentioned the red flags, he’d break up with me. It was a sinking ship, but darn it—I was goin’ down with the boat.

I’m not exactly sure when my fear of rejection began. The above example, while highlighting the idol my fear of rejection became, is certainly not the only story I could share. I’m full of examples in which my fear of rejection takes on gargantuan proportions. If it’s not sinful, it at least toes the line. Of course no one likes rejection. But when you fool yourself into staying in an unhealthy, doomed relationship, you have a problem. It could stem from my desire to avoid conflict or my need to be liked, or maybe it’s an offshoot of my fear of failure. More likely it’s all of those things rolled together.

But it is not a very winsome quality. It can come across, at best, as skittishness caused by discomfort, and, at worst, as clingy and desperate. And it can manifest itself in so many ways. It can keep you from seeking out actually fulfilling relationships or a new job, or stop you from simply being yourself. It hinders just about any choice or decision that isn’t a sure thing; it sneaks its way into interactions and relationships and choices of all sorts and is the impetus for lost opportunities. It keeps us from living authentically and fully and confidently.

When I refuse to say something or speak up for myself because I’m afraid of rejection, I am brazenly refusing to trust God. I am saying to God that it’s more important for me to maintain my fragile ego than it is to follow him and trust in his goodness and grace. Because the truth is that if I do step boldly into something uncomfortable—if I do face the possibility of rejection and it comes to pass—most of the time, all I really risk is a hit to my pride. And if we can’t even risk that, what will happen when God asks us to risk even more?

These days I’m not afraid of losing a relationship, but I am still afraid of rejection. My path away from fear is long and slow and seemingly never-ending; my fears change but the struggle continues. Here’s just one example: I have always loved to take on artistic pursuits, but I’m afraid of where they’ll lead—or, rather, I’m afraid they won’t lead anywhere. I have a stash of unfinished stories, novels that haven’t gotten further than one page (or sometimes one paragraph), and dozens more ideas percolating in my imagination. But rarely do I even write my ideas down. Forget all the rejections from publishers I’d be likely to receive if I were to finish a story; I’m afraid of what anyone would say. It cripples me before I even begin. And that is a waste of a gift God has given me. What a shame.

But I keep moving forward with hope, trusting that, with God’s help, each time I make the choice to risk rejection, I am overcoming my fear.

Of course, even if we do overcome the fear of rejection, we are still not promised an easy road. There’s no guarantee of a perfect relationship, or a perfect career, or a perfect life. The path ahead will be bumpy—that we can be sure of. But we are always asked to trust in the goodness of God.

It is as simple and as complex as that.

For more help on facing rejection, check out these resources:

The Girl in the Orange Dress: Searching for a Father Who Does Not Fail

Great article, very relevant to my life. I thought I was just getting a tale about relationships, and you provided both that and a reflexive parallel to the common fear of rejection. Also as a graduated English major with a fear of rejection (relationally and creatively) I found this insightful. I wish I had more motivation to start my stories! I think encouragement-- real and honest (and authoritative, perhaps?)-- is very helpful for this.

Wow, Katie. This is literally

Wow, Katie. This is literally the story of my life, right down to the pile of unfinished stories and love of Pixar movies. Thank you so much for sharing. You are a talented writer, and I hope you do publish more of your work.