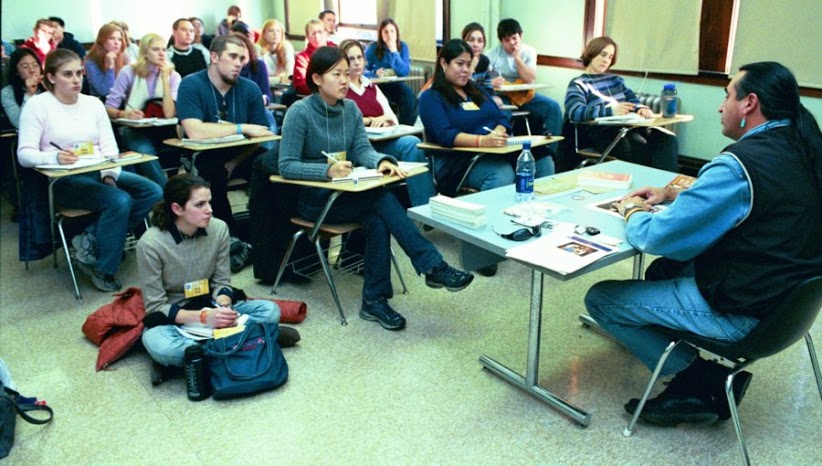 On February 9, Richard Twiss left this earth and entered his true, eternal home. We know he is now in the physical presence of the Lord and Savior he loved so deeply and served so well.

He left behind a legacy that is very much alive. It's impossible to measure the breadth of his ministry, and the number of ways God worked through him. On Sunday, many who knew and loved him will give testimony to his influence by gathering to celebrate his life.

Many at InterVarsity, in particular, were friends, students, and mentees of Richard's. Staff worker Eric Seaberg recounts here a few qualities of Richard that particularly encouraged and shaped him.

Richard Twiss was a significant mentor/teacher for me in my own personal journey into the indigenous part of my heritage with the Sami Nation. I received so much revelation and insight from him over the years that it’s hard to know where to begin.

What I especially appreciated about Richard was his ability to push out the boundaries and limitations of contemporary theology in the West—to include a much broader and deeper view shaped by his indigenous roots and experience as well as by the huge stream of influence from the emerging church in the Global South. He could be controversial at times, but he always shared his perspective with such grace and good humor that you just had to love him, even while you were simultaneously absorbing a new insight that was shaking and challenging your own narrow evangelical mindset.

The generation of Native vision casters that Richard represented (along with guys like Terry LeBlanc, Ray Aldred, and the whole network of the North American Institute of Indigenous Theological Studies [NAIITS], which Richard helped create) really revolutionized the global indigenous church and helped bring revival to many enclaves of indigenous people groups. He was instrumental in forming the “World Christian Gathering of Indigenous People” conferences, which connected indigenous movements within the body of Christ from all across the globe. He also created many conferences for the North American Native community (e.g., the “Many Nations, One Voice” conferences) to help develop awareness of unique Native cultural identities in this country and raise up a whole new generation of visionary Native leaders.

For years it seemed like Richard was traveling everywhere in this country and abroad, bringing his message of affirmation regarding indigenous identity and culture and of reconciliation and justice for past oppression of Native peoples, as well as a prophetic vision for the future role of Native believers, to hundreds of communities and churches. Only in recent years did he begin to pull back from that mission and stick closer to his home in Oregon to focus on writing and teaching.

I am proud to include myself in this particular generation of leaders. They have profoundly shaped me over the last two decades, and I will continue to count myself as one of them for the rest of my life in this world. We all seem to have begun this fascinating indigenous journey when we were younger adults in the 1980s and 1990s, and I am convinced it was a profound spiritual movement—orchestrated by the Lord—that brought each of us together (to our surprise and delight) for a much higher purpose in the kingdom of God.

I am blessed, and Richard was blessed, to be part of a movement that is bringing all of the indigenous nations into their true identity, purpose, and calling for these end times. And it was certainly no accident that connected all of us, along with the amazing people groups that we all come out of.

This Sunday, March 10, at 4:30 p.m. PST, friends and family will gather to celebrate Richard’s life and legacy. You can view the service live by going to livinghopechurch.com and clicking on “Watch Sermons.” Join us in praising God for the gift of this remarkable man—and may we be faithful to carry on the good, powerful work God used him to do.

Eric Seaberg is a Campus Staff Member with InterVarsity at the University of Wisconsin in Madison.

View Richard's obituary or our news article to learn more about his life.

The Life of God on the Reservation