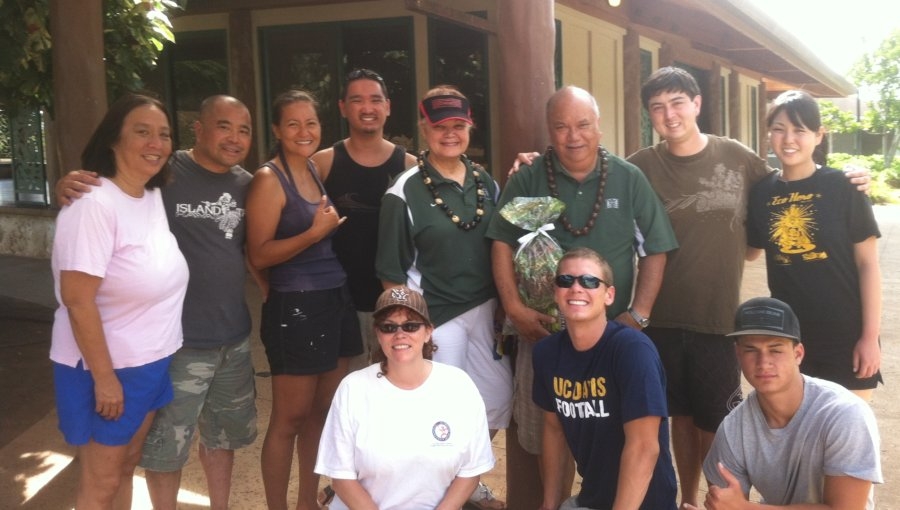 When I moved back to Hawai‘i in 2007, I participated in Ho‘olohe Pono—a two week summer immersion into the Native Hawaiian community—to listen, learn, and serve with the aloha (love) of Jesus.

This summer was my fifth time attending, and I took five students along with me.

Students and InterVarsity staff from multiple campuses in Hawai‘i, came together with community members to listen to the Hawaiian community, to see how God is at work among the Hawaiian people.

InterVarsity staff Moani Sitch started Ho‘olohe Pono in 2005 as a way to build bridges between the church and the Hawaiian community. Among many other things, we heard from cultural practitioners, kūpuna (elders), and activists, and we served in a lo‘i kalo (taro patch) and loko i‘a (fishpond)—important parts of Hawaiian sustainability and mālama ‘āina (caring for the land).

The things I learned through Ho‘olohe Pono, have helped me connect with the Native Hawaiian community on campus, taught me how to have a posture of listening and learning, and have ultimately made me a better follower of Jesus.

Ho‘olohe Pono showed me that to follow Jesus well, I must humble myself in order to listen well and pursue justice.

Even though I grew up in Hawai‘i, I discovered through Ho‘olohe Pono that I still had a lot to learn about the Native Hawaiian community[i] that I hoped to serve. There are many issues affecting the Hawaiian community that God cares deeply about.

For example, last year one of our student leaders at the University of Hawai‘i at Hilo and I joined the Hawaiian Club for a camping trip, where the majority of students and hosts freely spoke in their native Hawaiian language (which was effectively banned from public use after American colonization in 1893).

During the trip, we built deeper relationships, listened to these students’ stories, encouraged and prayed for them. Although I am not a Hawaiian language speaker, and I did not understand everything that was said, I wanted these students to have space to freely use their language.

Had one of our InterVarsity student leaders and I not participated in the camping trip because of a language barrier, we would have missed an opportunity to share God’s love.

How Summer is Affecting Ministry on Campus

As a result of my experience during this camping trip and Ho‘olohe Pono, I try to have Bible studies available in both English and another language – Hawaiian, Tagalog, Hawai‘i Pidgin, or Spanish, in order to make InterVarsity a more welcoming place.

Ho‘olohe Pono not only teaches students and staff about what it means to follow Jesus, but it exposes students to God’s power and love in a way that empowers them to reach out on campus.

Abel, a junior at the University of Hawai‘i at Hilo, shares that he has a better understanding of who God has made him to be as a Native Hawaiian man.

Kimiko, a new Christian and recent graduate from the University of Hawai‘i at Hilo, is continuing with graduate school in public health at the University of Hawai‘i at Mānoa where she will learn about improving the health and natural resources for Native Hawaiians. As she transitions to her new campus, she plans to get involved with Hui Poly, a chapter plant started by InterVarsity staff Moani Sitch and a Native Hawaiian student. This new chapter is focused on reaching Polynesian students and friends.

With their experiences in Ho‘olohe Pono, Hui Poly students reach out to other Polynesian students on campus with an eye for culture, language, and worldview.

Another student is even dreaming about starting an InterVarsity ministry in her home country in the South Pacific.

God's Vision Spreading to Many Campuses

“Ho‘olohe Pono was a vision given by ke Akua (God), who has provided for and used it to bring about such healing, empowerment, restoration and hope in more ways than we could have asked or imagined!” shares Moani Sitch (InterVarsity staff, Hui Poly InterVarsity chapter).

A year ago, InterVarsity did not exist on the Big Island of Hawai‘i. But through vision from God, we now have a chapter that serves students at the University of Hawai‘i at Hilo and Hawai‘i Community College (both campuses are in Hilo, HI).

If we humble ourselves and follow Jesus’ example and listen well for God and to others, who knows what He is accomplishing through each and every one of us on our campuses.

Brennan Takayama is on staff with InterVarsity planting a chapter at the University of Hawai‘i at Hilo and Hawai‘i Community College. He is of Japanese and Chinese ancestry and was born and raised in Hilo, Hawai‘i. After serving among Latino students while he was in college in California, God called him back to Hawai‘i to learn and serve among Native Hawaiians. He loves cooking, hanging out at the beach, and karaoke.

1- a video that documents Ho‘olohe Pono

[i]Native Hawaiians are the indigenous peoples of Hawai‘i who inhabited the islands prior to 1776
Blog Categories:
Ethnicity, Reconciliation, & Justice