Lord, Meet Us in the Storm | InterVarsity
Skip to main content

Lord, Meet Us in the Storm 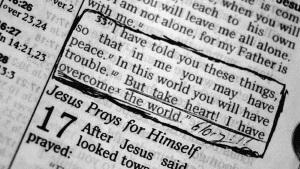 “No probable cause exists to indict Officer Wilson.”

I was just about to walk out the door to get on the bus to take my eleven-year-old to choir rehearsal when I heard these words. It’s funny—although I didn’t really expect any other announcement, I was still shocked and saddened by the decision.

I asked my son if he knew what the decision by the Ferguson grand jury meant, and he said no. I told him that it meant that the police officer that shot Michael Brown didn’t do anything wrong.

He said “oh,” but something seemed off in his answer; neither he nor I could find the words to describe how we were feeling—so we went on. We got on the first bus, laughed about how the bus driver commended him for putting the right fare in the right slot, transferred buses, noticed how the same sights we see everyday look different on a bus, got off at the car wash on 40th and Broadway, and then walked a few blocks to his rehearsal. I dropped him off.

As I walked away, I quietly prayed that he, millions of other Black boys, and millions of us Black men would be safe tonight (along with Black women and girls too).

You know, I believe in justice and truth. I believe that the grand jury in Ferguson did the best they could with the data they had. I believe that most of the parties involved are doing their best to do what’s right. But in the current culmination of all this “doing their best,” I feel strongly that the importance of Black life has eroded a little, and that this country I call home is just a little bit more against me, those who look like me, and those who stand with us.

Praying with you, even in the

Praying with you, even in the next weeks to come! Thank you for your honesty in sharing, Phil - I often forget how God meets us in our dreams. -Col. 1:3-14